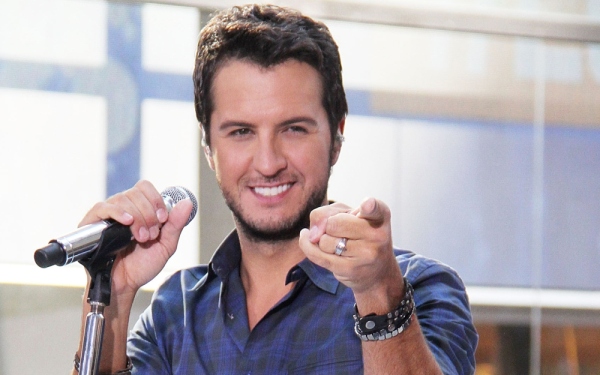 Luke Bryan's concerts fill stadiums, and his albums top the charts. He ranks No. 4 on Forbes' most recent list of top-earning country stars, having brought in $42.5 million over the past year.

He's the reigning Entertainer of the Year for both the Country Music Association and the Academy of Country Music.

Yes, Bryan is living the dream. And the 39-year-old Georgia native -- who performs Aug. 29 at Levi's Stadium in Santa Clara -- absolutely knows it.

"I remember being a kid and watching Joe Montana," Bryan says during a recent tour stop in Pennsylvania. "San Francisco was almost another world -- completely across the country from me.

"That I can go with my tour and play Levi's Stadium in the heart of (the Bay Area) is just truly one of the most amazing definitions of the American dream. It's just something that you don't take, for one second, for granted. It's this huge, huge eye-opening thing for me."

Bryan is certainly on an amazing run, having charted nearly a dozen No. 1 singles over the last five years and risen to become one of the top touring artists in the nation. That kind of success might lead some artists to play to safe, but Bryan isn't one of them.

"I think the fun part of this business is taking some risks," he says. "You always have to fight to be on the edge of some stuff. But then, I think you also have to stay true to yourself and give fans what they expect. I think there is a little bit of room for all of it."

The balancing act can be found on Bryan's recently released fifth studio album, "Kill the Lights," which follows 2013's "Crash My Party."

"When you hear the first single, 'Kick the Dust Up,' that song is pretty out there with different sounds that you've never heard in country music," he says of the single, which many have noted for its Middle Eastern flare. "But then, I've got some songs on the album that are very classic country and very kind of contemporary.

It's been a steady growth process for Bryan, who first broke onto the national scene with his major label debut, "I'll Stay Me," in 2007.

"In the beginning of my career, I was as traditional as anybody," he says. "Back then, I was one of the only artists in town who was really tracking with fiddle and (pedal steel guitar) on my albums. As we've grown, we still use fiddle and steel -- but we use them in different ways, (for) different sounds."

Yet Bryan isn't trying to follow in the boot prints of, say, Eric Church, the maverick singer-songwriter who drew much media attention for stepping way outside mainstream country music's normal boundaries with last year's daring "The Outsiders."

Mission accomplished on "Kill the Lights." Even when Bryan ventures a bit outside the box, adding touches of R&B, rock and even electronic music to the mix, there's never any real doubt that you're listening to a country record.

The initial reaction from the public has been quite favorable. "Kick the Dust Up" has already topped the singles charts. And it's pretty easy to imagine other cuts, such as the bumper-sticker-ready anthem "Huntin', Fishin' and Lovin' Every Day," following suit.

"I've always tried to up the ante on all my records," Bryan says. "I think it's my best album that I've been a part of at this point in my career."

Although Bryan has had plenty of success in the studio, he is arguably even better known for his energetic live performances.

"There is just no way that you can go to a Luke show and not be caught up in the enthusiasm of fun," says Nate Deaton, general manager of the San Jose country music station KRTY 95.3 FM.

"I've educated myself the way you ought to -- just by getting out there and getting onstage and working hard," he says. "I kind of try to use all that stuff every night I'm onstage."

Bryan has drawn plenty of headlines in recent weeks. For one thing, he got a lot of publicity for releasing his own official mobile "app," which provides Luke, Luke and more Luke to both iPhone and Android users.

He also generated much talk after he weighed in about the Confederate flag, in the wake of the shootings in Charleston, South Carolina. He told Billboard magazine that the flag has "become a symbol of racism to a majority of people. And we live in a country where we have to listen to people's opinions and work it out."

He's also at the heart of a touching human interest story, having taken in his nephew Tilden ("Til") after the 13-year-old's father died suddenly last year (his mother, Bryan's sister Kelly, died in 2007). Bryan and his wife of nine years Caroline -- she was his college sweetheart -- are also helping raise Til's two older sisters, although they don't live in the Bryan house.

"We're figuring it out every day," Bryan says of the new family situation. "We've had, obviously, a lot of tragedy and a lot of loss, but we're trying to make the most of it. Til is an amazing young man to have in the house. His two older sisters are with us quite a bit. I've never had to be an influence on girls, so I'm trying to figure that whole world out, too.

"You don't get a manual on the way the cards have been dealt. We are just excited watching (Til) grow as a young man and putting a lot of amazing opportunities in his path and seeing which way he takes them."