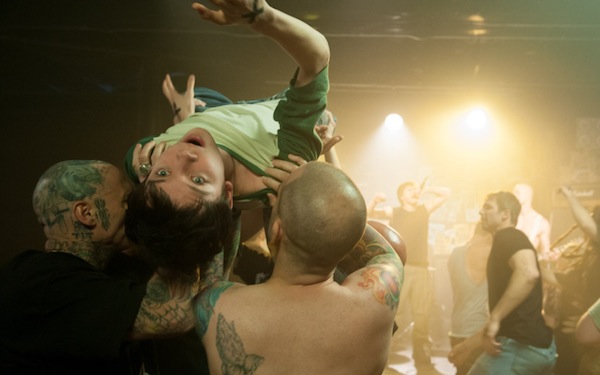 For innumerable reasons, the coming-of-age tale is one we can all instinctively connect with. Even if the specifics are somewhat marginalizing, the simple phenomenon of growing older in this uncontrollably vast space is a widely universal experience. That’s precisely why coming-of-age stories have a leg up on winning the audience’s favor, because it wields an essential part of our being. So when a film like Ten Thousand Saints rolls around, flaunting all of the tormented whimsies of youth, and all of the sudden you catch yourself wondering what you’re gonna be having for dinner later that night, then you know something went horribly awry.

On paper, this adaptation of Eleanor Henderson’s novel of the same name seems rather promising. Boasting a cast that includes the likes of Ethan Hawke (Boyhood), Hailee Steinfeld (True Grit), Asa Butterfield (Ender’s Game), and Emile Hirsch (Into the Wild), your mind automatically calculates an enjoyable, if not memorable movie-going experience.

And then there’s co-directors Shari Springer Berman and Robert Pulcini, whose previous works like Oscar-nominated American Splendor (2003) and the impressive HBO movie Cinema Verite (2011) warrant a certain amount of hope in their latest endeavor, but unfortunately, that hope swiftly turns to disappointment with Ten Thousand Saints.

Set in the mid 80s in the midst of a growing punk scene, the narrative revolves around a quintessentially rebellious teenager named Jude (Butterfield) as he traverses the angst-riddled waters of whatever. His deadbeat father Les (Hawke) left his family for another woman when he was a kid, so he’s obviously jaded and has the haircut to prove it. So years later, when Les (confusingly) sends his latest girlfriend’s daughter Eliza (Steinfeld) to hangout in their small Vermont town for New Years, he’s a bit remiss to show her any sort of affection. Naturally, and because this is a movie for crying out loud, he totally digs her against his own will, but of course she’s more intrigued by his best friend Teddy (Avan Jogia).

It’s after unexpected tragedy of Teddy’s death that ultimately brings Jude to live with his estranged, weed-dealing father in the East Village in NYC. And this is where things get weird. Looking to keep his connection to Teddy alive, Jude seeks out his brother Johnny (Hirsch), a straight-edge musician squatting in one of the worst NYC neighborhoods. Johnny shows Jude a new lifestyle, while also winning the affection of Eliza, once again to Jude’s chagrin. It’s at this point when Ten Thousand Saints suddenly turns into a kitschy, melodramatic rendezvous in the messiest of ways.

Mainly, Pulcini and Springer Berman’s script is tonally disjointed, to the point where the waves of lightheartedness trivialize the already reaching emotional stakes. The overtly dramatic themes of death, abortion, and drugs become awkwardly counterbalanced by the script’s ill attempt at comedic relief.

Hirsch as the straight edge—that is, someone who abstains from sex, drugs, meat and other “unclean” lifestyles—becomes a wildly laughable aspect of the film, which is wholly disheartening since his acting is often something I admire. Surely, he was meant to be somewhat of a clown, but seeing as his world became Jude’s sanctuary from the hazards of his life, it completely drowns out the poignancy of his struggle.

The exception to their comedic pitfalls is, unsurprisingly, Ethan Hawke’s performance as Jude’s hippie, non-committal dad. With his usual seamless appeal, Hawke exudes coolness in Les that perfectly explains why no one really hates him when they really have every reason to. His moments of bonding with Jude hold more weight than any of the other dramatic scenarios—a shame considering his storyline is by far the least emphasized.

The youngsters that take up most of the screen time, however, are left feeling overcome by a cliché of the teenage plight. The distinctive aesthetic of the 80s becomes a costume as Butterfield and Steinfeld attempt to portray something they do not know, as something they needed to fit into instead of wear.

Regrettably, the tumultuous nature of this era of NYC, with the AIDS epidemic taking flight and lower classes raising hell, was lost to a façade rather than a spirit, something that is truly surprising to see from these particular directors who are capable of so much more than Ten Thousand Saints.

TEN THOUSAND SAINTS is available on VOD and in theaters now.