Remembering the 1972 Wattstax concert brings us to crucial voices of Kendrick Lamar, Prince 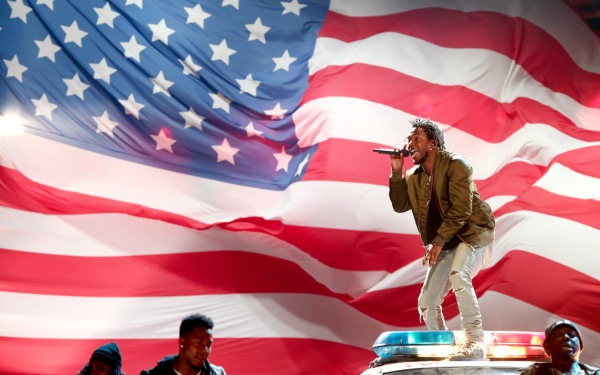 It was spoken of as sort of a black Woodstock. It featured artists like Isaac Hayes and the Staple Singers. And it was right here in L.A.

But judging by its absence in conversations about the '60s and '70s, few remember the 1972 Wattstax concert. It was an answer to the Watts riots of 1965; a chance to counter the destruction with a daylong celebration of black music and culture.

Now, on the 50th anniversary of the Watts riots, the concert is a powerful reminder of where L.A. was in those years directly preceding the uprising in which 34 people died, more than 1,000 were injured and property damage was estimated at $40 million.

For those who weren't born yet, the concert is chronicled in the 1973 documentary "Wattstax." In one particularly moving performance, the nearly 100,000 predominantly black concertgoers who packed the Los Angeles Memorial Coliseum had their fists raised in the air as soul singer Kim Weston sang "Lift Ev'ry Voice and Sing," a song that's spent nearly the last century as the black national anthem.

Wattstax was sponsored by Stax Records, the Memphis label that was home to Otis Redding and the Emotions. Stax artists Hayes and the Staple Singers were featured on the bill along with nearly two dozen more acts from the label, including the Bar-Kays, Rufus Thomas and the Soul Children. The concert, officially called Wattstax 72, was organized as "a day of black awareness," as Jessie Jackson said during his invocation.

The Watts riots erupted in August 1965 after a young black male was pulled over on suspicion of drunk driving. The routine arrest escalated into a violent confrontation. That night, 1,000 people rioted, some throwing bricks, rocks and bottles at police and motorists, The Times reported, and sparked six days of rioting.

"We all got pissed and went out and burned up our neighborhood," a man says in the film. "We brought 'the man' onto their own land. That's the only way we could communicate."

The Watts uprising is just one of many entries in the long, complicated history of race relations in this country — each with its own soundtrack as black music continues to provide a crucial voice, particularly in times of protest.

Before Watts and beyond it, the tumult, rage, love and hope being felt in the black community seeped into the music coming from its artists.

"You don't have to live next to me, just give me my equality," Nina Simone sang on her controversial yet seminal anthem, "Mississippi Goddam."

N.W.A brazenly shouted "F— tha Police," lyrics that became a mantra when Los Angeles erupted in fiery riots and violence in the 1992 uprising that echoed the events of Watts from nearly three decades before. The recent blockbuster success of N.W.A's biopic, "Straight Outta Compton," is proof of these themes' timeliness.

Today a new generation of young black men and women are pushing back against social injustice. The deaths of unarmed blacks in Ferguson, Mo.; Baltimore; Cleveland; Staten Island; North Charleston, S.C.; Cincinnati; Waller County, Texas; and more have reignited the ongoing debate over the use of lethal force disproportionally against blacks by law enforcement.

On the surface, Jidenna's "Classic Man" is a gleeful club banger, but it's also a rare celebration of black men. Compton rapper Kendrick Lamar's empowering, post-depression joint, "Alright," is emerging as a protest anthem. And Prince's recently released single, "Baltimore," is a beautiful call to the streets in the wake of officer-involved deaths of unarmed black people.

In the Wattstax documentary, images of black daily life — people smiling and dancing, getting their hair done, laughing with neighbors or going to work — are spliced against footage of the riots. People discussed their anger over police-involved shootings and feelings of disenfranchisement from city officials as scenes of the civil rights era flashed across the screen.

It was an attempt to show that, yes, life goes on, but that doesn't cover up the pains of the past. It also documented that the Wattstax concert was an ambitious undertaking, especially for the time.

With tickets priced at just $1 to ensure everyone could afford to come, it wasn't just a celebration of black music in the name of charity, it was a movement.

Today's festivals and concerts dedicated to black audiences almost certainly grew out of the experiment that was Wattstax. The Essence Fest and the BET Experience exclusively celebrate black music, both attracting hundreds of thousands of attendees annually.

At this year's BET Experience in June, a partially reunited N.W.A led the 20,000 concertgoers — of all races, mind you — inside Staples Center through a singalong of "F— tha Police" as images of protest and police brutality (from old clips of Rodney King to fresh, social media-captured scenes) flashed on a video wall.

And when Lamar opened the BET Awards that same weekend, he stood atop a police car covered in graffiti under a waving, partially shredded American flag (recently seen at MOCA as the centerpiece of William Pope.L's "Trinket") as dancers moved triumphantly around him, appearing in protest of their surroundings. Fox News pundits ripped the performance, claiming it "incites violence," but attendees of a Black Lives Matter conference at Cleveland State University turned to its chorus after a confrontation with police.

Big Sean has a surprising method for dealing with fame