Will a ‘Walking Dead’ prequel breathe new life into AMC? 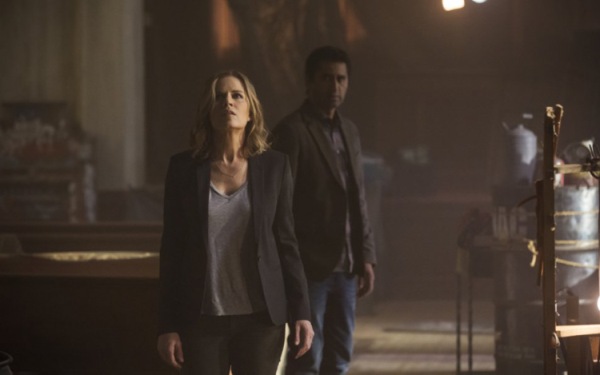 Who says nobody walks in L.A.?

With “Fear the Walking Dead,” the prequel to the hugely popular “The Walking Dead,” AMC will fulfill the desire of Robert Kirkman, creator of the series and the comic book that inspired it, to see a huge city get destroyed by flesh-eating corpses. The series premieres Aug. 23 and will have Los Angeles eventually overrun by legions of peripatetic zombies known as “walkers.”

“We wanted to see a city fall, which is something we didn’t get to see in the comics or the original show,” said Dave Erickson, the new series’ show runner. “I feel what we were able to do was to take the disaster film trope, the zombie film trope and present it in a way where it feels grounded. Where it feels like if this were to happen, this is how it would go down.”

AMC executives are hoping the disintegration of Los Angeles will invigorate a lackluster summer lineup and help heal programming wounds left by notable departures. The network has now bid farewell to marquee Emmy-winning shows — “Mad Men” and “Breaking Bad” — and there are high hopes that the spinoff could become a ratings force not unlike the mothership “Dead” series, one of the most-watched shows in television.

The series, which will certainly feel familiar to “Dead” fans, is determined to stake out its own turf within the increasingly crowded zombie universe. Viewers should almost immediately understand they’ll be seeing a different side to the city than is usually presented in other L.A.-centric apocalyptic tales.

This will be no glimmering, shimmering cliche portrait of L.A., where most of the show’s exterior shots were filmed. (Most interior sequences were done in Vancouver.) Instead, much of the early action will be centered in neighborhoods in L.A.’s Eastside, including Wilson High School in El Sereno, a view of Silver Lake just off of Sunset, the L.A. River and a humble Denny’s a few blocks from the county jail in downtown.

“We were never going to have zombies leaning up against the Hollywood sign,” Erickson quipped.

“One of the things that came up talking about L.A. and making it a character in this story was to really show a different L.A. than commonly seen on TV and movies,” said Adam Davidson, a series director and co-executive director who grew up in the city. “The L.A. I’m familiar with, you open the door and walk outside and see every crack in the asphalt and buildings that look like they’re going to blow away with the next earthquake. It’s a flawed world, and then this happens.”

“Fear the Walking Dead” could also be a bit of a test of how Hollywood does or doesn’t capture the diversity of a city that is about half Latino — mostly of Mexican descent — with a fast-growing Asian population as well. “The Walking Dead” series itself has come under criticism for not having proportional representation of African-Americans, especially male characters, among its cast despite being set around Atlanta. (There was also the high kill rate for black characters.)

“If you’re going to set something in Los Angeles and be honest to the place, culturally and historically, you have to represent the people who live here,” Erickson said. “You do need to be mindful and thoughtful of the city you’re representing. It doesn’t make sense not to, and makes the show better, it makes the show richer.”

On the warm, breezy day last month while filming in an atypical location above the cliffs of Palos Verdes, nine survivors stepped out of their cars looking wary and tired. Six of them were not white.

The spinoff seeks to answer one of the nagging unanswered questions of the original series when its lead character, Rick Grimes (Andrew Lincoln), lay in a coma — how did the zombie armies spread in that time? The spinoff picks up before the zombie infestation has exploded, and part of its narrative spine is to demonstrate the unraveling of civilization as the soulless menace slowly unfolds.

Unlike the original, set largely in rural pockets around Atlanta, the spinoff is based in a highly urbanized area. With millions of people — and potential undead — spread over hours of driving before reaching true isolation, Southern California and its endless patchwork of urban and dense suburban neighborhoods presents a different kind of zombie fighting and escape from the original series.

When things go full apocalypse in L.A., just imagine the Battle of Stalingrad on every block but waged between millions of the living and rotting cannibals instead of Germans and Russians. And think you can just hop on your car — preferably a hybrid with good mileage — and head for the desert?

“Everyone gets the same idea eventually and everyone gets trapped,” Erickson said. “It’s the cities that fall the fastest.”

It probably wasn’t a surprise that after a fire jumped over Interstate 15 in the Cajon Pass last month, sending panicked people fleeing from cars that would be transformed into burned-out shells on the freeway, one of the most common comparisons on social media was to scenes of abandoned cars from “The Walking Dead.”

In the spinoff’s premiere episode, there’s a scene in which two of the lead characters, played by Kim Dickens (“Deadwood,” “Treme”) and Cliff Curtis (“Training Day,” “Collateral Damage”), are driving on an L.A. freeway at night. Traffic suddenly stops and you can hear the sound of police giving orders through a bullhorn from one of the thrumming helicopters hovering ominously with blinking lights overhead.

There’s the sound of gunfire. The protagonists eventually manage to speed off around the stop without knowing that something horrifying transpired. It’s an eerie scene because even at that moment, without seeing anything more than the characters did, viewers will know what they don’t: It’s beginning.

“Fear the Walking Dead” will have a broader focus than the original and will immediately introduce viewers to a blended family. Curtis’ Travis, a teacher divorced from his wife, Liza Ortiz, and emotionally estranged from his son, Chris, lives with girlfriend Madison, a guidance counselor at the same El Sereno high school and her daughter, Alicia. Madison’s son, Nick, is a drug addict.

“It’s the family that are surrogates for the audience, and it’s very relatable to people,” Dickens said. “It’s just so different from watching a character who’s already in the apocalypse.”

At the onset of the series, Dickens’ Madison is a more cynical, flinty contrast to Travis, an optimist. By everyone’s account, Curtis, who memorably played the main Mexican-American gang banger in “Training Day,” is basically playing a character very much like himself.

“I love my character. It’s the one that’s been the closest to me that I’ve ever played,” he said. “Travis believes in the good in human nature. I’m like that.

“He’s a guy who doesn’t belong to this world. He’d probably be voted least likely to survive,” Curtis said with a laugh, though like the rest of the cast he doesn’t know what fate awaits his character beyond the first season.

Curtis, who has played Latino and Arab characters — often villains — despite being a Maori from New Zealand, was initially going to be Latino in the series. But a decision was made to let him play his character as a Maori, something Curtis said was a twist in his career.

“It wasn’t anything I asked for or pushed for. But I was really happy,” he said. “It’s kind of like a little bit of a milestone in my career. ... It’s a nice little breakthrough for me that they’re adapting a role to who I am and what I am.”

It is Blades’ character and that of his wife, played by Mexican actress Patricia Spindola, who at one point offer sanctuary to the other protagonists. Blades said he thought it was a subtly smart touch that Spindola’s character utters not one word in English in the series — her words being subtitled — while their young Americanized daughter is not very fluent in Spanish.

Blades said that Hollywood has a way to go in representing Latinos, not only with nuance but with some regularity. He said he has seen signs that things are improving, noting prominent roles Latino friends have landed recently in films including the upcoming “Star Wars Episode VII: The Force Awakens” and a “Point Break” remake.

“Things are changing. However, we continue to be viewed as exotic” and foreign, he said. “The issue isn’t that we’re saying we need to have Latinos on the screen that are examples of the excellence that we also have. We’re saying that we should have Latinos that are treated in an intelligent way.”

Blades said he thinks that was achieved with “Fear the Walking Dead.” He credited AMC for putting together a diverse cast and for portraying a non-token Latino family suddenly thrust into the maw of a gruesome apocalypse like everyone else.

“The questions that this series presents are very topical,” Blades said. “What do you do when the world collapses as you knew it? What do you do when the moral code is blown away, the law has fallen apart, and everything that is supposedly the right thing to do is replaced by the need to survive at any cost?”

Now, throw in drought, the Big One earthquake, Santa Ana winds, mudslides, El Nino mudslides and the mother of all Sig Alerts and you have the perfect L.A. apocalypse.