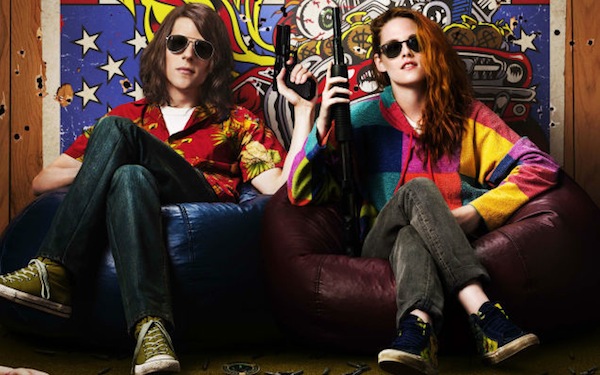 I will be the first to admit, I wanted to hate American Ultra with all of my being. Call it a willful stubbornness, mainly based on the previous and rather stale pairing of Jesse Eisenberg and Kristen Stewart in Adventureland (2009), but I was immediately readying myself to be snobbishly lulled into a wearied stupor after what was sure to be another ill-attempt at stoner comedy.

Whoa, was I wrong.

American Ultra is flipping fun as hell. And it’s smart. And it’s sweet. And I’ve apparently lost the ability to form complex sentences. Let me reel myself back in for a moment and start with the story.

It’s all based on a real-life government operation called MK Ultra, which started in the 1950s in an attempt to reprogram random peoples’ brains using psychotropic drugs. It’s main goals included mind control, and in the best-case scenario, creating superhuman assassin monster things. As you might imagine, the op failed miserably, but that also means its prime material for movie magic.

American Ultra is about what happens when one of those puppet assassins is a regular ole Joe—or at least believes he is. Mike Howell’s (Eisenberg) life is a simple one; he works at a food mart, likes to smoke a lot of pot, and daydreams about proposing to his dear girlfriend Phoebe (Stewart), but all of the sudden everything about his small-town life is turned on its head. When some power-hungry agents at The CIA believe Mike’s untapped abilities are a threat to national security, they instigate a mission to wipe him out, but when trouble comes knocking, Mike is activated into a frenzy of preprogrammed kickassery, and well, you can imagine some heads will roll.

Awesome right? You bet your butt it is.

Following his first debacle of a film Project X back in 2012—another reason for my initial skepticism—director Nima Nourizadeh had something to prove. Where his debut tried too hard to capitulate on teenage culture, becoming an absurd and cringe-worthy watch, American Ultra is everything but. Paired with the young talents of screenwriter Max Landis (Chronicle, 2012), they cradled the fact that, even if the premise is somewhat over the top, the dialogue, the humor, and the action surely don’t have to be.

The result is effortless from pretty much every angle, with the exception of some of the government bits with a bothersome Topher Grace (“That 70s Show”) as the CIA villain, and a totally underutilized Tony Hale (“Arrested Development”). But all of that becomes wonderfully trivial when compared to our two heroes Jesse Eisenberg and Kristen Stewart, who together form the most oddly perfect couple in American Ultra’s world of chaos.

Eisenberg, who usually seems like he could burst from an anxiety attack at any moment, flows into the role of stoner with… precision? It seems too uppity of a word when paired with talks of weed, but its true. His comedic timing and ability to bring something refreshing to the overwrought cliché of stonerism flows from some natural spring of wit that can only be tapped into with the right material, e.g. Zombieland (2009) and The Social Network (2010). It’s especially in the moments when his stoner life crosses his assassin tendencies, and he is sincerely and hilariously confused about it, where Eisenberg wins us over.

And then there’s Ms. Stewart, who many have hardcore opinions about. Take me for instance. I’m hardcore apathetic towards her as an actress. She can’t seem to choose whether to be in bad movies or good movies, so I’m often left teetering on the line of meh. But as Phoebe, Mike’s loving girlfriend who deals with all of his ridiculous quirks and who also has wicked tricks up her sleeve, she is unexpectedly flawless. It’s her first role as a love interest that is deeply felt and utterly believable, and thankfully, on top of that, Nourizadeh and Landis give her tons of oomph that make her worth rooting for besides being the handy girlfriend.

Long story short, if you’ve been wondering what to do with those 96 minutes between scratching your head and picking your nose, fill it in with American Ultra. That’s all there is to it.