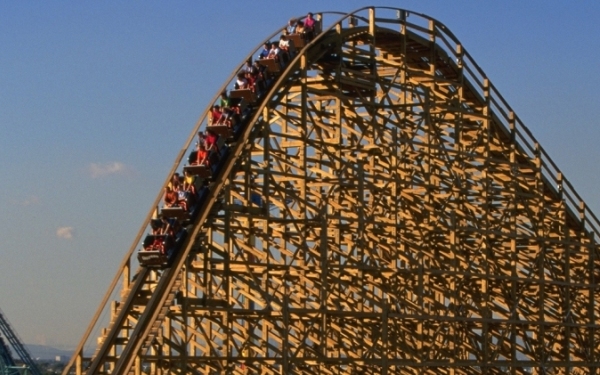 Knott’s Berry Farm plans a full restoration of the aging GhostRider wooden coaster as part of a 75th anniversary celebration of the Ghost Town area of the Buena Park theme park.

The few details released by Knott’s left many unanswered questions: Who will do the makeover? Will any inversions be added? When will GhostRider reopen?

The most obvious contender for the makeover is Rocky Mountain Construction, which has added corkscrew inversions and overbanked turns to a number of wooden coasters in recent years to the delight of ride enthusiasts.

For 2016, Rocky Mountain already is working on a new coaster at Tennessee’s Dollywood and a renovation at Kentucky Kingdom. The Idaho-based company recently advertised a surveyor position for a California coaster project that stoked speculation that GhostRider or Roar at Vallejo’s Six Flags Discovery Kingdom could be getting a Rocky Mountain makeover.

Cedar Fair has more than two dozen wooden coasters in its vast collection from manufacturers like Philadelphia Toboggan Coasters and Great Coasters International. For the GhostRider makeover, Cedar Fair could decide to work with PTC or GCI again or choose another ridemaker like Ohio-based Gravity Group, which recently added an inversion to a wooden coaster at Wisconsin’s Mt. Olympus park.

The GhostRider was built in 1998 by the now-defunct Custom Coasters International with PTC trains. The 118-foot-tall double out and back wooden coaster reaches a top speed of 56 mph over a 4,500-foot course.

The jaw-rattling ride has gotten so rough in recent years that I started referring to the coaster as RoughRider. Knott’s has been known to bring GhostRider to a complete stop during a mid-ride brake run in order to prolong the life of the aging coaster track.

Modern wooden coasters don’t age well and typically require regular maintenance that becomes increasingly expensive with each passing year. Recent renovations at parks in Texas, Massachusetts and Mexico have transformed aging wooden coasters into hybrid rides by adding new steel reinforcements to existing wooden tracks and supports. If GhostRider follows this route, you can expect the renovated ride to feature the speed and smoothness of a steel coaster while maintaining the look and feel of a wooden coaster.

If inversions are not added to GhostRider, Knott’s will have to tamp down expectations and discourage comparisons to the newly renovated Twisted Colossus hybrid coaster at Six Flags Magic Mountain, which opened to rave reviews in May.

GhostRider closes Sept. 8 before the annual Halloween Haunt event kicks off at Knott’s. More details on the renovated ride are expected in November. A summer 2016 debut seems likely for the newly improved coaster.

While many questions remain, one thing is certain: The Ghostrider renovation opens the door for more wooden coaster makeovers at Cedar Fair parks.