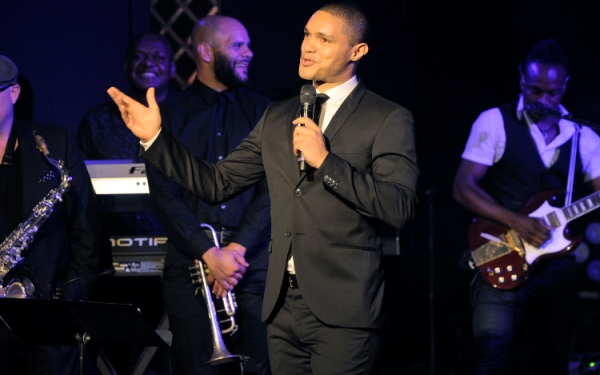 Trevor Noah attends Apollo in the Hamptons 2015: A Night of Legends at The Creeks in East Hampton, N.Y., on Aug. 15, 2015.
(Credit: Nicholas Hunt/Patrick McMullan Co./Sipa USA/TNS)

NEW YORK — The television landscape has completely transformed since Johnny Carson gave his final farewell on NBC’s “The Tonight Show” in 1992. But even in the age of streaming video and DVRs, late-night TV is getting more attention than it has seen in years.

Viewers are eagerly awaiting next month’s debut of Stephen Colbert on CBS’ “The Late Show” and Trevor Noah taking the helm of “The Daily Show.” The transitions are expected to be major pop culture moments that are already generating excitement on Madison Avenue.

Late-night talk shows are seeing double-digit percentage gains in advertising revenue in what has otherwise been a stagnant TV ad market in recent years. And a new generation of hosts are using the Internet to reel in younger viewers.

“Late night is where the action is right now,” said Billie Gold, vice president and director of programming research for ad agency Dentsu. “There are very few new shows in prime time that are creating buzz among advertisers. Late night is being reinvigorated.”

As Colbert and Noah come on, NBC is doubling down on host Jimmy Fallon by signing him to a contract extension that keeps him on “Tonight” through 2021.

Fallon, who took over for longtime host Jay Leno in February 2014, is not only the late-night leader but is scoring better ratings than his predecessor. He has averaged 1.4 million viewers this season in the 18-to-49 age group that advertisers prefer. According to NBC Entertainment Chairman Robert Greenblatt, the “Tonight” franchise is “exceedingly profitable” again after having become a break-even operation for the network not so long ago.

The reward for a smooth host handoff can be handsome. The total 2014 ad spending on the broadcast network late-night talk shows alone was $597.5 million, according to Kantar Media. That’s 14 percent over 2013’s total, and Fallon’s show accounted for a significant portion of that increase.

The topical comedy on the shows — a major part of the national conversation about society, celebrity and politics — is keeping their status as appointment programs when more viewers are using DVRs or streaming services to watch shows on their own schedule. Eighty-one percent of “Tonight” viewers watch the show live compared with 62 percent for NBC’s prime-time series, according to Nielsen. The figure is 92 percent for ABC’s “Jimmy Kimmel Live.”

It’s not that late-night TV is immune to the increase in viewer choices and technological trends that have sliced and diced the mass audience that Leno and David Letterman battled over in the 1990s. Ratings for all of the late programs have declined in the current TV season. But more people are watching than ever before as digital video clips from the shows draw hundreds of millions of online views.

“If it wasn’t for that, many, many fewer people would be seeing the shows, because the ratings are down for everybody and there are so many people on,” said one veteran late-night producer who did not want to discuss the ratings publicly.

The potential for turning those online views into ad dollars is one reason CBS executives are enthused about Colbert’s arrival Sept. 8.

Big-name guests honored David Letterman during the final months of his 33-year run as a late-night host. But as a business, “The Late Show With David Letterman” had faded. While Letterman took a pay cut in his final seasons, the profitability of his show had diminished. Until Colbert debuts, CBS is running drama repeats in “The Late Show” time period. They’ve been drawing the network’s best late night ratings since the 2010-11 TV season.

With Colbert on board, the network has already seen “healthy increases” in ad rates and volume of commercials sold during the upfront sales market for the 2015-16 TV season, CBS Chairman and CEO Leslie Moonves recently told Wall Street analysts.

There is also a long-term business benefit to the host change that will last even after the novelty has worn off.

After years of paying a license fee to Letterman’s company to produce “The Late Show,” CBS now owns the franchise and will produce it in-house. That gives CBS more control over costs and allows it to reap the revenue the program generates on digital video platforms as well as sales of the show to overseas broadcasters.

CBS has already gotten a sense of late night’s digital potential with its new “Late, Late Show” host, James Corden. The British actor was a virtual unknown in the U.S. when he took over the 12:35 a.m. time slot from Craig Ferguson. But his segments, such as Carpool Karaoke, in which he sings with star performers inside a moving SUV, have exploded online. Corden’s musical ride-along with pop superstar Justin Bieber has drawn more than 32 million views on YouTube since it went up May 20.

The expectation is that Colbert, who has already teased his CBS arrival with a series of viral videos, will be a big attraction online.

“From a business perspective the ownership position is huge,” CBS Entertainment Chairman Nina Tassler said in a telephone interview. “We have two new hosts in late night who are forward-thinking and progressive, not only in their view of the world but in terms of embracing digital content as a form of communication with their viewers — and we’re able to monetize it.”

Other late-night producers and network executives note that online video revenue is still modest compared with what they take in for TV commercials — and converting those views into dollars is one of the goals for their business. Big money won’t be made, they say, until they can find a way to drive more users to the networks’ own websites for clips instead of depending on YouTube, which takes a large share of the ad revenue generated.

Nevertheless, digital video has been a marketing boon for late-night TV, making it relevant to the generation growing up with video on their mobile devices. Conan O’Brien has said when fans approach him to talk about bits from his TBS late-night show, he assumes they experienced it online, where his material gets 100 million views a month.

In the short term, however, all eyes will be on the changes at CBS and Comedy Central.

Dentsu’s Gold believes the 2016 race for the White House, already great comedy material thanks to the emergence of reality show star and real estate mogul Donald Trump as the Republican front-runner, plays into Colbert’s strength as a political satirist demonstrated on “The Colbert Report.”

“A lot of Hollywood likes to be in the smart crowd, and I can see that working well for Stephen Colbert,” said Daniel Kellison, a veteran late-night producer who is now a partner in Kimmel’s production company. “When actors put on their glasses, they are going to want to go on Colbert’s show.”

Noah, a 31-year-old South African comedian little known in the U.S., is expected to have more of an uphill climb in succeeding Stewart, who was as important to Comedy Central as Carson once was to NBC.

But Comedy Central President Michele Ganeless said she’s not concerned about Noah’s newcomer status because the channel’s viewers are younger than the broadcast networks’ and “are ready for the new and the next, maybe before some others are.”

Outside of the host, the format of “The Daily Show” remains intact along with the senior team of producers and writers that has been creating the program with Stewart in recent years. “It is ‘The Daily Show,’” Ganeless said. “There will be political coverage. We have our rooms booked for the party conventions.”

One major change in the late-night wars is the lack of backstage rancor that characterized the Leno-Letterman rivalry.

It was stirred by the belief by fans and some comedy cognoscenti that Letterman was the rightful heir to Carson’s “Tonight” chair. But in the current era, when fans can connect to their favorite hosts any time, the old traditions and feuds appear to be fading.

“I think there were some weird personality issues among various late-night hosts over the years,” Greenblatt said. “Now that’s in the past. Colbert and Jimmy Fallon are really good friends. They are going to be friendly competitors. It’s a good business when you have hits.”