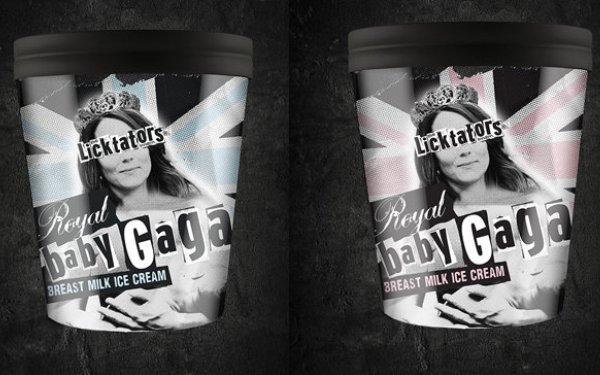 Silly is as silly does. And, in the silliest pop-music-related story of the week so far, silly is going to town in a big way, although it may all be a case of spilled milk. Make that, frozen spilled breast milk.

One one side is singer, songwriter and erstwhile pop provocateur Lady Gaga. She has recently toned down her penchant for fueling shock and awe, thanks to a major image-makeover that includes touring and recording with legendary jazz crooner Tony Bennett, performing a tribute to Julie Andrews and "The Sound of Music" on this year's Oscars telecast, and getting engaged to TV actor Taylor Kinney, who often hangs out at his San Diego beach pad.

On the other side is, ahem, The Licktators.

No, that's not a new punk-rock band. Rather, it's the British ice-cream company that earlier this year launched its Baby Gaga brand of ice cream earlier this year to celebrate (read: cash in on) the birth of Prince William and Kate Middleton's second child. The ice cream is made, at least in part, of breast milk. (The other ingredients include lemon and vanilla.)

The London-based Mirror newspaper reports that Gaga's representatives at the copyright protection firm of (you can't make this up!) Bear and Wolf last week sent a cease-and-desist letter. The letter charged The Lickators are exploiting Gaga's name without her consent. The letter also demanded the English ice cream company remove any mention of Baby Gaga from its website and social media within two weeks, and cease producing and marketing Baby Gaga.

Thus far, no actual litigation appears to have taken place. But The Lickators are not taking all this lying down, as befits a company whose other products include General Custard, Choc 'n' Roll Rehab, Jiggy Pop and John Lemon.

After pointing out that Lady Gaga got her stage name from the Queen song "Radio Ga Ga," the company issued a statement on its Facebook page: "The Licktators are opposing Gaga on the basis that the disputed word 'Gaga' is not a word she can claim copyright on, having a meaning of its own in the Oxford English dictionary as well as being a sound that babies commonly make."

The company further argued that, since Gaga does not own the word "gaga," The Licktators "will not back down over spurious trademark claims."

But the company is happy to exploit all of this for extra publicity. And it did extend a frozen olive branch to Gaga.

"We don't lick boots and won't be dictated to, however we are sending complimentary tubs of our ice cream to Lady Gaga for chilling out to as a gesture of peace and goodwill," Matt O'Connor, a spokesman for the Licktators, said in a statement.

Fun side note: The human breast milk in The Licktators' ice cream products is purportedly donated. ("Honey, the kids are full! What are we going to do with all this extra breast milk? Al our pitchers are full and there's no more room in the fridge. Hey, why don't we donate it to an ice cream company? Maybe we'll get to meet Lady Gaga!")