Actress Connie Britton finally gets some action in American Ultra 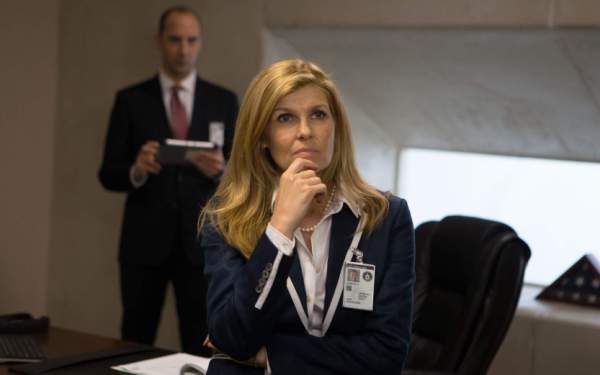 Connie Britton has played everything from a legendary country singer on the TV series “Nashville” to a sweet and caring mother in the feature film “Me and Earl and the Dying Girl.” Despite a diverse acting career, Britton has never been cast in the role of action hero.

She finally gets her chance to play a gun-toting character in the new comedy/drama/action film “American Ultra.”

“It was really such a joy when this script came along,” Britton says in a quick interview before heading back to the Tennessee capital to continue work on the upcoming season of “Nashville.” “I had just wrapped up season two of ‘Nashville’ and was looking to take a break. But, this script was so smartly written I had to do it.

“Plus, the role was so unusual for me. I just don’t find roles like this one.”

Her character in “American Ultra” has been running a super-secret government program to turn third-strike offenders into super agents. One of her last test subjects (Jesse Eisenberg) has been targeted for elimination. The only option she has is to activate him so he will have a fighting chance.

Because the movie started filming in New Orleans just days after her TV series wrapped production for the year, Britton had little time to go through much gun training. And, in the film, she’s carrying some big hardware.

“I did a crash course in gun training and that made me feel a little better about handling the guns,” Britton says. “But, the character was not suppose to be very adept as a field agent because she’s been involved more with the medical side.

“So, that took me off the hook a little bit.”

It didn’t take Britton long to realize that carrying a weapon feels extremely different than walking around with a guitar or the cooking utensils she’s used playing so many different moms. She says the gun gave her a feeling of authority because it was “strangely empowering.”

While “American Ultra” gives her a chance to play an action character, Britton can’t get too far away from the motherly roles she has done so well. She plays a government agent, but her concern for the subjects is very personal.

The motherly elements are so intentional, there’s even a line in the film where Eisenberg’s character asks her if she’s his mother. Britton explains that maternal element made the role more complicated than a traditional action figure.

“The idea was really that her motherly instincts are what drives her to go to the aid of Jesse’s character. She never had kids of her own,” Britton says. “No matter how big or small the part that I get, I always want them to feel human. That’s what the motherly elements did in this case.”

The big differences between her work on “American Crime Story” and the majority of her other roles is that she’s playing a role based on a real person. She also portrayed a real person in “Friday Night Lights” but that character wasn’t as well known as Resnick.

“I do play roles based on real people a little differently,” Britton says. “Faye required a lot more research in a very specific way. I try to look at a character from the inside and playing out. To replicate that with a real person you need as much information as possible.”