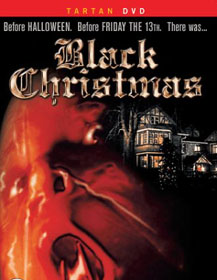 To celebrate the 30th anniversary of the holiday slasher flick Black Christmas, L.A.’s Nuart Theatre – as part of its "Friday Midnights at the Nuart" series – will host a special screening of director Bob Clark’s cult favorite, which is also known in some circles as Silent Night, Evil Night.

The film, released in 1974 and dubbed the first ever holiday-themed slasher movie (creepfest Halloween didn’t see a theatrical release until four years later), involves an "unwanted" visitor at a remote sorority house who will, ultimately, end up sending some of the house’s female inhabitants home for Christmas – dead.

There are quite a few students in danger – including

To commemorate the anniversary, Black Christmas’; director Clark and co-star Saxon will be in person at the Nuart to answer everybody’s questions. Needless to say, the evening sounds like it will be a real scream! (Pun intended.)

For more information about Black Christmas or to see other upcoming films in the "Friday Midnights at the Nuart" series, visit www.landmarktheatres.com.