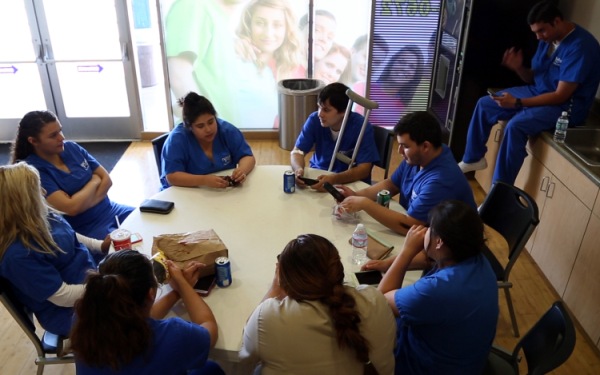 Paul Fajardo joins his fellow classmates for lunch as they wind down after class on June 3, 2015 at National Polytechnic College in the City of Commerce, Calif.
(Credit: Morgan Noelle Smith/Los Angeles Times/TNS)

One crucial source of revenue, however, has remained a constant: military veterans.

For-profit colleges have collected $8.2 billion from the latest GI Bill since it went into effect in 2009, according to a Los Angeles Times analysis of government data. Those colleges enroll only 8 percent of all U.S. students but 30 percent of the 1.4 million veterans who have used the most recent version of the GI Bill.

That money for years helped prop up some of the industry’s most distressed institutions — including ITT Educational Services Inc. and bankrupt Corinthian Colleges Inc. — which needed the funding to meet tough regulatory requirements.

To keep the GI Bill money flowing, the industry aggressively targeted veterans, and often hired them to help recruit their brethren returning home from the battlefields, according to internal school memos and interviews with former students and employees.

U.S. Army veteran Don’re Walker took one of those recruiting jobs at an ITT campus in Orange County in 2012. He quit less than a year later.

“It was basically ‘Get people in any way possible,’” he said. “They were exploiting my brothers.”

For-profit colleges grew rapidly during the Great Recession by offering admission to almost anyone with a high school degree, flexible class schedules and promises of job training to displaced workers.

As enrollments soared, regulators took notice of high tuition costs and poor student performance. For-profit colleges on average charge more than four times as much as community colleges, according to the College Board, and cost significantly more than the in-state tuition at public four-year colleges.

Associate’s degree programs in fields such as automotive repair and information technology can cost as much $47,000.

Many veterans were attracted to practical training programs that offered online coursework and start dates throughout the year. For veterans juggling families and other responsibilities and eager to get back in the workforce, it’s a highly successful pitch, former students said.

“You’re jumping on the first thing that looks good,” said Ryan Gregory, who attended an ITT campus in the San Diego area after U.S. Army tours in Iraq and Afghanistan. “You’re thinking ‘I got a late start and I’ve got to get going.’ And they feed off that.”

The new GI Bill, the most generous veteran education benefit in U.S. history, covers 36 months of tuition at any public school or just over $21,000 a year at private institutions, as well as providing an ample housing allowance.

It was a godsend to for-profit colleges, which had been struggling to comply with a federal student aid regulation known as the 90/10 rule.

The rule — which requires for-profit schools to derive at least 10 percent of revenue from non-federal sources — is a cost and quality-control measure. It ensures that schools do not operate solely on federal financial aid.

By 2008, meeting the 90/10 rule was becoming more difficult as students found it harder to secure private loans amid a dismal economy. Because veterans’ benefits are not counted as federal dollars in the equation, the bill offered a lifeline to schools that came dangerously close to violating the rule.

Corinthian Colleges had four institutions that failed to meet the federal 10 percent threshold in 2012 and 2013, putting the schools at risk of losing federal funding if they violated the rule for a second consecutive year.

Corinthian’s deputy general counsel, William Calhoun, said in a statement that the company is proud of its programs and that veterans “clearly saw value in our flexible schedule and curricula offerings.” The company filed for bankruptcy in May amid federal and state investigations and shut down its campuses this spring.

“Veterans will immediately have greater acceptance hearing our message from one of their own,” read one such 2008 internal memo from the operations department of ITT. The company planned to “target the largest installations first,” with goals to hire recruiters from every branch of the military, according to the memo.

A spokeswoman for ITT, Nicole Elam, said the company has never had a “military-specific” recruiting program and the memo was a “draft” plan that was never carried out.

“Never give up, especially when dealing with important issues such as 90/10,” he wrote. “The VA is a terrific opportunity.”

A spokesman for Education Management Corp. declined to comment.

Apollo Group, which owns the University of Phoenix, has taken in about $1.25 billion worth of GI Bill benefits since 2009 — by far the most of any higher education institution.

Two former recruiters at the University of Phoenix in June filed a lawsuit in Kentucky alleging that employees were instructed to attend job fairs at military bases “under false pretenses.” Phoenix recruiters showed up at military installations saying that they were there to hire veterans, but the suit says it was “a ruse for obtaining leads and enrollments.”

Mark Brenner, a spokesman for Apollo Group, said the University of Phoenix plans to “vigorously defend” against the former employees’ “fictitious allegations.”

The U.S. Federal Trade Commission and California Attorney General Kamala Harris’ office recently ordered the University of Phoenix to provide documentation on its military recruiting practices, according to company filings.

U.S. Undersecretary of Education Ted Mitchell, who has overseen recent for-profit college regulations, has urged Congress to pass legislation closing the “inappropriate loophole” that fails to count veterans’ benefits as federal dollars. Bills that would make that change have stalled in Congress.

“The last thing we should be doing for our veterans is making them cash cows,” Mitchell said in a recent interview.

The industry’s share of GI Bill money has held steady despite an executive order from President Barack Obama, signed more than three years ago, calling on the U.S. Department of Veterans Affairs to discipline schools that engage in “aggressive and deceptive” targeting of veterans — particularly at for-profit career colleges.

VA officials said they are now providing more information to veterans, such as an online tool that lists overall graduation and loan default rates, and will soon publish data on veteran student performance.

Lawmakers and veterans’ advocates argue that the VA has failed to police problematic institutions despite clear warning signs. In the case of Corinthian — which collapsed following a U.S. Department of Education probe into falsified job placement rates — the company had warned about an impending shutdown since June 2014.

Though the VA administers the GI Bill, state-run veterans’ agencies decide whether to revoke a school’s ability to collect GI Bill money. Some states, including Massachusetts and California, stepped in quickly to cut off Corinthian’s funding. Other states did nothing.

When Corinthian closed its remaining campuses in April, 422 veterans were still enrolled at schools in Arizona, Hawaii, Oregon and New York.

“While you could paint that as a negative, overall the effect on our beneficiaries was minimized,” said Robert Worley, who directs the VA education service. Many states stepped in early to protect thousands more veterans, he said.

Worley suggested that students could have withdrawn if they had concerns following news reports of trouble at Corinthian.

Charles Haislip, a former U.S. Army Military Police officer, attended Corinthian’s Heald College in Honolulu. He said he had heard about Corinthian’s problems, but he relied on the VA’s continued approval as a reason to keep attending.

When the college shut down, Haislip’s GI Bill housing allowance was immediately cut off. He fell behind on his rent.

“I didn’t do anything wrong,” said Haislip, who was just three classes away from graduating with a criminal justice degree. “I served my country. I enrolled in school and took advantage of my benefits. Why should I be punished?”

Veterans left hanging when schools close have few options. Unlike students with federal loans, who can have their debt erased after a school shutdown, the GI Bill benefits simply vanish when their 36 months of tuition run out.

ITT is the latest test for state and federal authorities.

This year the company was sued by the Securities and Exchange Commission for not fully disclosing to investors the risk posed by two of its private student loan programs. A separate civil lawsuit filed by the U.S. Consumer Financial Protection Bureau last year alleges that ITT engaged in predatory lending. The company is under investigation by more than a dozen state attorneys general.

ITT has denied the allegations in the lawsuits, which are ongoing.

Only New York and California have moved to suspend GI Bill benefits at ITT schools — and neither has succeeded.

That would have helped Paul Fajardo, a Marine Corps veteran who served in Afghanistan in 2010. He lived out of a Chevrolet Suburban for three months last year after California suspended GI Bill benefits to Corinthian’s WyoTech campus in Long Beach — and with it, the housing allowance.

The time at WyoTech cost him most of his benefits, but he’s racing to complete a medical assisting degree at National Polytechnic College in the City of Commerce.

“They were excited to have us because they knew it was a guaranteed paycheck,” said Fajardo, who lives in Montebello. “I wasted a lot of years of my life going to that school.”