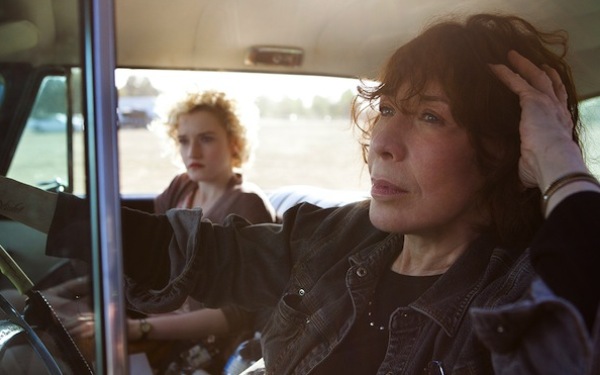 Grandma should not be criticized. It gives a national treasure who never asked to become one, Lily Tomlin, a showcase to display everything she’s got as a performer, especially the offhand courage to not play at being likable. It’s a perfectly gay-positive, pro-reproductive rights, anti-economic inequality, almost entirely Bechdel test-acing and otherwise impeccably progressive movie that always remembers correct thinking people can also be awful and funny and dumb.

The film even appreciates poetry and has a sweet ’55 Dodge, more or less well-preserved. So enjoy, guilt free.

If director Paul Weitz’s (“About a Boy”) script, however, makes you feel that parts of the movie rest on unexamined assumptions or tries too hard to be, well, right, you’re not a bad person.

The resulting odyssey to borrow the needed funds, mostly in that Dodge Elle inherited when the longtime love of her life died, results in a series of fraught confrontations with the likes of Elle’s still-hurting ex-husband (Sam Elliott, another great part in his current resurgence), mother-and-daughter pro-life protesters, Sage’s high-powered, high-strung mother (Marcia Gay Harden, also unpleasantly terrific) and others. Some of them prove to be better people than others, but all of them get quite forgivably teed off by Elle’s bullying demeanor.

Tomlin is unmistakably in some pure acting zone with all of Elle’s self-defeating outbursts, and she brings the funny to it as only a professional of her caliber can — even when Weitz’s lines are too overwritten or too rhetorically easy. As indicated above, it’s a performance that should just be admired.

Still, it isn’t hard for Elle to wear out her welcome with an audience as effectively as she does with the characters onscreen who we must believe either like or love her.

Truth telling is a tricky business. “Grandma” gives us what could become an iconic example of that difficult personality type, and the cinema is richer for it. A more honest movie, though, wouldn’t have been that much harder to take.