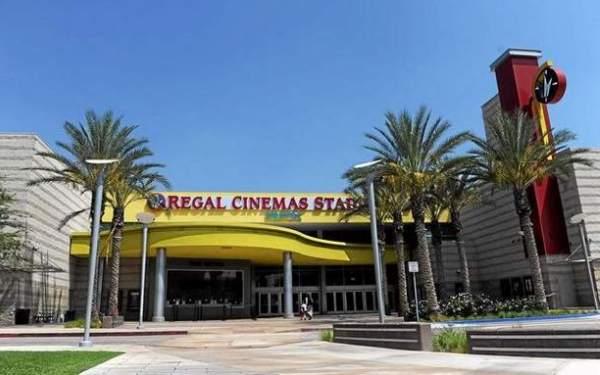 It is a new normal at some theaters from the South Bay to the Inland Empire, where Regal Entertainment Group has asked its 580 theaters nationwide to check moviegoers’ bags and their purses in response to recent movie theater shootings around the country.

So far, responses from theatergoers to the heightened security have been mixed. Observers are waiting to see what the business impact will be — and if others, like AMC, Krikorian and Laemmle will follow suit.

For now, paying a little extra for a ticket, waiting a little longer in line and privacy concerns are small inconveniences if they could stop a person from bringing firearms or other dangerous items into a theater, customers say.

Illiana Patschull of San Pedro was one of them Friday, as she and her husband went to a matinee screening of “Straight Outta Compton” at the Regal Cinemas in Rolling Hills Estates.

There, a sign in the lobby greeted customers at the ticket-taking point: Bags and backpacks will be subject to searches.

“I’m kind of irritated, because as a woman, I don’t like people in my purse,” Patschull said.

She also didn’t like the idea of companies potentially adding fees for the bag checks, which the theater is not doing at this point.

“This isn’t the airport,” she said.

As theater shootings have made national news this summer, customers across the region were also seeing a bigger picture.

It’s a picture that has them willing to sacrifice some sense of privacy.

“I know I wouldn’t bring a gun or anything dangerous into a theater, but I know that crazy people out there might. ... This (the new check system) makes the movies safer for me,” said Joele Ghosm, 24, of Loma Linda, who carried a small purse with her into the Regal Cinema in San Bernardino.

A ticket-taker asked to look in her purse.

“I get angry when anyone goes into my purse,” Ghosm said. “And now I won’t be able to take my own snacks to the movie,” she said.

Regal did not respond to the Los Angeles News Group’s request for comment for this report, nor did other chains, including AMC, Laemmle, Krekorian or Harkins.

The new theater admittance policy, posted on the Regal Entertainment Group website, states, “Security issues have become a daily part of our lives in America. Regal Entertainment Group wants our customers and staff to feel comfortable and safe when visiting or working in our theatres. To ensure the safety of our guests and employees, backpacks and bags of any kind are subject to inspection prior to admission. We acknowledge that this procedure can cause some inconvenience and that it is not without flaws, but hope these are minor in comparison to increased safety.”

It was unclear if licensed gun owners permitted to carry a concealed weapon could enter. Though former Texas governor Rick Perry has said that “gun-free” zones are a bad idea at places like theaters, because law-abiding gun owners would be able to protect themselves if guns were allowed and an incident occurred. A group called the Second Amendment Check has started an online petition that calls out several companies, including Regal, “for their lack of respect for the rights of gun owners.”

Regal’s new policy follows repeated incidents of violence at movie theaters in the past three years, the most recent occurring earlier this month and in July at theaters in Nashville, Tennessee, and Lafayette, Louisiana, respectively.

On Aug. 5, Vincent David Montano was killed by Nashville police after attacking moviegoers at the Carmike Hickory 8 theater with a hatchet and pepper spray. He was fatally shot by police after firing an airsoft pistol at them.

On July 23 in Lafayette, John Russell Houser, 59, walked into the Grand 16 movie theater during a screening of “Trainwreck” and opened fire on the audience, killing two people and wounding nine others before committing suicide.

On July 20, 2012, James Eagan Holmes, during a midnight screening of the film “The Dark Knight Rises” at the Century 16 movie theater in Aurora, Colorado, burst into the theater through a rear door, set off tear gas grenades and opened fire into the audience with several firearms. He killed 12 people and injured 70 others.

Holmes, now 27, avoided the death penalty. On Aug.?7, two days after the attack in Nashville, a jury determined that Holmes should spend the rest of his life in prison.

The perpetrators in all three attacks suffered with some form of mental illness, which has sparked a national dialogue about gun control, mental health and public safety.

Roughly a third of those surveyed by C4 said theaters should have metal detectors, and that bag checks or even armed security guards would make them feel safer. Only 9 percent of the people surveyed said they plan to limit the number of movies they see in theaters as a result of the violence at movie theaters, according to the survey.

“As a country we have become very aware of and accepting of a degree of security in public places,” said Ben Spergel, C4’s executive vice president of consumer insights who conducted the survey.

He said movie theaters provide ideal conditions for a mass-casualty shooting in that they are dark, often loud, and moviegoers are immersed in the film and not typically paying attention to what is occurring around them, and therefore are more likely to be caught off guard.

“They are, by nature, places where people go to escape,” said Spergel, adding that other theater chains could adopt policies identical or similar to Regal’s if shootings at movie theaters become more prevalent.

“The issue with anything like this is, who pays for it?” Spergel said. “I think other theaters will probably see how Regal does it and what impact it has before initiating their own policies.”

“Once upon a time we all just got on airplanes,” Burguan said. “Essentially terrorist events have driven the change.”

“Movies are now the next piece of threat reduction,” he said. “There is something to be said about preventing something that we never knew might happen.”

But it also has to be done within reason, he cautioned.

“The police department wants to be called if the new security effort yields a significant threat. I’m not sure we want to get calls for service if they find some marijuana,” he said.

San Bernardino resident Sandi Roberson, 54, said she stayed away from movies after the recent shootings.

Although she was not aware of the policy change before entering the Regal in her hometown, Roberson said she thinks it’s a good idea, and it makes her feel better about going to movie theaters with this policy.

“There are a lot of crazy people ... and a lot of bad stuff going on with movie theaters. This is not a bad thing,” said Deborah Lawrence, 51, of Grand Terrace after a screening of “Straight Outta Compton” in San Bernardino.

“It makes sense ... we have seen detailed checks at airports, then checks at sporting events, like hockey and baseball ... It was only a matter of time before security tightened at movie theaters,” she said.