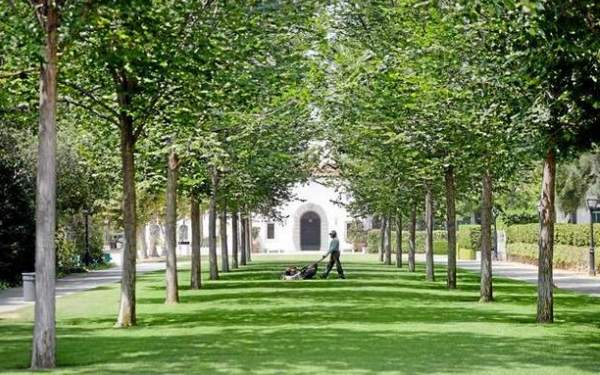 Since the fall of 2014 Scripps college has embarked on several major projects in order to take advantage of the Smart Water Rebate program.
(Credit: John Valenzuela/Inland Valley Daily Bulletin)

CLAREMONT -- Scripps College has long been known for its sprawling lush green spaces, flowers, and trees.

Since 2014, the all-women’s college has removed 99,103-square-feet of turf. In some cases, the turf has been removed or replaced with drought tolerant landscaping and grass both on and off campus.

The grounds crew at the college estimates the water usage has been reduced by 50 percent; its a conservative figure since the crew doesn’t have the figures to compare from the previous year. The first significant project was to remove 15,000 square feet of turf on three medians on Platt Boulevard, between Harvey Mudd College and Scripps.

“Our campus is very beautiful, and we couldn’t be a campus without grass at all but we’re really trying to minimize it and finding different ways of using the space, replacing the grass and making it a functioning space as well,” said Donna Ng, vice president for business affairs at Scripps College.

In the Claremont Colleges — a consortium of five undergraduate and two graduate institutions — Pomona College has also made landscaping changes. Pomona removed 140,000 square feet of turf over the summer and has begun the process of replacing it with drought-tolerant landscaping. It brings the overall turf removal, through the years, to 350,000 square feet or eight acres, said Mark Kendall, spokesman for the college.

• Seaver North Parkway and the turf area northeast of the building

“We will continue to review our campus landscape and utilize the best practices in irrigation application to maximize the available water.” Kevin Quanstrom, assistant director of facilities and campus services in a statement.

For Scripps College, the administration looked to its Water Task Force and the Scripps Associated Students eco-representatives to get a consensus from students about what they wanted to see at their campus.

Based on 96 responses, students indicated they would be very happy if the grass were removed or replaced with low water plants in proposed areas.

Over the summer, crews worked on perhaps the most visible changes on the campus, the replacement of the turf on Elm Tree Lawn and Bowling Green Lawn to drought-tolerant grass. The first, Elm Tree Lawn is the walkway of American elms that leads to the president’s house while the latter is the open space near Bulch Auditorium. Scripps College officials say the switch resulted in a 30 percent savings in water use.

The student survey also indicated students would be happy if the college served at least one low-meat meal a week.

Students also talked with dining services staff about foods sources and different kinds of choices they can make to help conserve water. At the Motley, a student-run cafe, the staff changed from serving almond milk to hemp milk.

“The students are a lot of the work that we do. Their initiatives come forward they are a part of the process, and it is a wonderful community activity,” President Lori Bettison-Varga, who will be leaving the college later this year.

Bettison-Varga said Scripps has had to find a balance between the beauty of the campus, the way it is used and the ongoing drought.

This conversation is not new to the college, she said. When the college was founded, the board of trustees early on – when they were thinking about the college grounds – was hesitant to plant lawn because of the water usage issues. Even in the late ‘20s and ‘30s the idea of water as a precious commodity in Southern California was a concern.

But the grass was eventually planted at the pressing of its student body.

“There was a group of students who went without dessert for a year so that the college could plant lawn so that they could use and convene,” Bettison-Varga recalled. “(Now) you see people sitting on the lawn, they have classes out on the lawn, and they eat on the lawn.

As staff thought about the conservation efforts they had to also think about preserving the architectural sight lines on the campus, said Lola Trafecanty, director of grounds for Scripps.

Scripps’ campus is based on visual alignments, Trafecanty explained, take for example the view standing from Bulch Auditorium facing east. There are a row of elm trees that directs the eye toward a lush green yard on the far end of the campus – the president’s house, she said.

Which is why, Ng said, “We are not just replacing it but looking at the purpose and function of the space and the design those changes accordingly.”