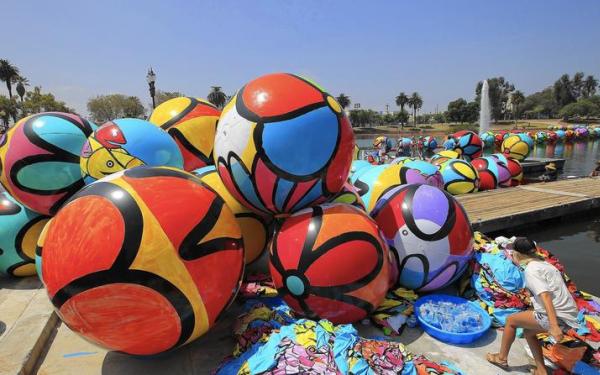 When artist Ed Massey imagines the lake at MacArthur Park in five days, he sees a field of candy-like multicolored gumdrops — red, blue, pink, green and yellow — afloat upon an urban sea.

Massey's confectioner's dream began to materialize Saturday as volunteers arrived at the park in a small fleet of trucks and vans carrying colorful piles of plastic that once inflated, came to life as brightly painted, vinyl spheres that will pepper the water like confetti.

A small motorboat and a canoe helped maneuver these orbs — some as large as 6 feet across and painted with flowers — toward the center of the lake, where they were tethered to a floating boom that stretched across the water.

Over the weekend and through the next week, more free-floating spheres will be added.

Massey's art project, "The Spheres at MacArthur Park," was first conceived in 2008 and had been destined for Europe. But after Massey and his brother, Bernie, drove down Wilshire Boulevard and saw the park last year, they thought the project would work well for Los Angeles.

Let Chicago have its 1999 CowParade art installation. Let Los Angeles have its 2000 Community of Angels sculptures..

"We want to help revitalize MacArthur Park and reintroduce this area of the city to people of Los Angeles," said Bernie Massey, who helped bring his brother's vision into reality. "This is a historic park in the middle of the city. Many people drive right by it and don't recognize its potential."

The display, which will take about four days to complete, is part of the Massey brothers' nonprofit Portraits of Hope, an organization devoted to creating public art installations that serve as creative therapy for children with disabilities and those in hospitals coping with cancer, burn trauma, head injuries.

The Masseys have also taken their work into schools to provide lessons in civics, current affairs and teamwork.

"Portraits of Hope is about improving the human condition," said Bernie, "and providing an opportunity for many people who are grappling with difficult circumstances — medical or physical. This is a chance for them to shine beyond their hospital walls."

In 2010, the Masseys, who are native Angelenos, launched their "Summer of Color," and for five months directed the efforts of children and adult volunteers as they painted the walls and roofs of lifeguard towers along the 31 miles of beaches from Ventura to San Pedro.

The Masseys estimate that nearly 10,000 volunteers and schoolchildren are behind "Spheres of MacArthur Park."

They come from a variety of schools and institutions, including the Camino Nuevo Charter Academy, the Heart of Los Angeles program, the Braille Institute, Shriners Hospital for Children and Miller Children's & Women's Hospital Long Beach.

Portraits of Hope, according to the Masseys, is intended to bring together young people from different backgrounds to give them a chance to experience public art.

"We're helping people who are facing a number of challenges in their lives and giving them an opportunity to say, 'I did that'," Bernie Massey said. "It's very empowering."

The spheres, which will number up to 3,000, will be floating in the park for four weeks. Every five days some will be replaced to change the appearance and arrangement upon the water.

After the installation closes, the spheres will be donated to schools, hospitals and social service organizations.

One of the Masseys' first projects in Los Angeles was the 1997 painting of an oil derrick, located on the campus of Beverly Hills High School on Olympic Boulevard. The derrick's 92 panels were covered with images of the four seasons.