Lindsey Lohan: Some Girls Have all the Luck 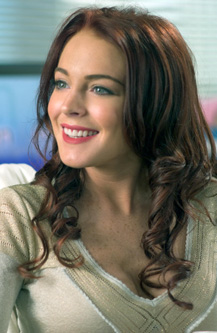 Is bad luck following Lindsay Lohan? She's led a fortunate life, but she's also had her fair share of misfortune and unfortunate circumstances. The day before her media appearances to promote her new comedy, Just My Luck , Lohan slipped coming out of the shower, which resulted in a hairline fracture in her foot.

Then, there was the incident during the filming of Just My Luck when Lohan twisted her ankle. She takes the injuries in stride, however, and refuses to believe it's because of bad luck. “Everyone has accidents,” says Lohan, sporting a navy shirtdress by Chanel and black leggings.

Just My Luck , directed by Donald Petrie is geared toward Lohan's loyal fan base of preteens, but it also marks a shift for the 19-year-old actress toward playing older characters. Ashley Albright (Lohan) is blessed with incredibly good luck, but her seemingly magical powers evaporate after a chance kiss with Jake Hardin (Chris Pine) who is plagued with bad luck. With the help of her friends, Dana and Maggie (Bree Turner and Samaire Armstrong, respectively), Ashley must find the stranger who stole her good luck so she can get it back with another kiss.

“It's kind of like a coming of age thing for me,” says Lohan, “and everything I'm doing after this, my characters are the same age, if not older [than me]. It kind of was the perfect thing for me because it's not a dark film, so I can still keep the fan base that I've grown with.

“I think it was hard for me to find that kind of film,” continues Lohan. “It still has a good message. I think that's important. I still have the young audience to look out for and this is acceptable for the younger audience and for people that are older than me.”

The role gave Lohan an opportunity to demonstrate her ability to do physical comedy. “At first it's always nerve-wracking, and then once you get comfortable with it, you realize, ‘I want to make it as funny as I possibly can,'” says Lohan.

She even tricked Petrie by pretending to walk into a glass wall. “Lindsay is walking along with me on the street and turns a corner and walks smack dab into a glass wall. I thought, ‘Oh my God, a broken nose,' and she's laughing at me. She did it supposedly on purpose. And I said, ‘Okay, that's going in the movie,'” Petrie recalls.

Filming took place in New York and New Orleans, prior to Hurricane Katrina. Lohan bonded with her co-stars, Turner and Armstrong, over online shopping and a road trip to Baton Rouge. The three were together when Lohan got her first tattoo, which has the words “La Bella Vita” on her lower back. “It's for my grandfather. It means “The beautiful life,” says Lohan, who has since added another tattoo that says “Breathe” on her wrist.

The phrase was inspired in part by Yoko Ono, who Lohan met while considering a role in the film Chapter 27 about John Lennon assassin Mark David Chapman.

“We were both wearing all black,” Lohan recalls, because she wanted to wear something that Ono would approve of. “We went and had sushi and she was so sweet and just amazing in the things that she had to say. I just think the things that she's done are wonderful and John Lennon's music is very inspirational, as was hers.” Lohan is also friends with Sean Lennon. “I just did his music video actually and we write music together,” she says.

According to actress, nobody in her staff wanted her to do the film. “I was actually really nervous going into it because I did get death threats and everything, but the director (Jarrett Schaeffer) I believe in and he's a good friend of mine. I love my character in the movie and she's just such a genuine fan of John Lennon and Yoko Ono in the film and she's the light in the movie.”

Lohan will also tackle the assassination of U.S. Senator Robert F. Kennedy in Bobby , written and directed by Emilio Estevez. Lohan's character is based on a woman who was at the Ambassador Hotel the night Kennedy was killed.

Does Lohan find it odd to be in two films that address significant cultural and political events that occurred before she was born?

“No. I think it's actually a great thing for me [and] my younger fan base. I think it's kind of nice that I can try and draw my audience in so they can learn from [the movie],” says Lohan.

Lohan turns 20 on July 2 and the projects she'll be working on in the next two years demonstrate a desire to have a long, meaningful career in Hollywood. It doesn't hurt that she's attaching herself to projects with big name talent like Anthony Hopkins, Aaron Eckhart and Adrien Brody.

Her first independent feature to hit theaters will be Robert Altman's A Prairie Home Companion based on the radio program created by Garrison Keillor. Lohan plays Meryl Streep's daughter.

“My role kind of got bigger as we went along because I became friends with Garrison Keillor,” Lohan says. “It was amazing, and I would look at the call sheet and I would just see these actors that I didn't believe were coming onto the set every day. It was a wonderful experience and good for me as my first independent film. It was nice to be able to sing live, and it's just one of those movies where it's always nice to have to look back on.”

“The whole cast went to dinner every single night. Everyone really got close with each other and it was like a big family, which is really amazing,” Lohan says.

Following Prairie , Lohan has a full slate of independent films. “I think it's just those are the projects that have caught my eye and I don't know, they're different. And the characters are all kind of – they're so different than anything I've done but I'm growing up.

“In Georgia Roll , my character, she plays this girl who was molested by her stepfather. And Garry Marshall's doing it and it's a dark comedy, but I feel like people will always be judgmental [about the choices she makes as an actress].” Lohan doesn't plan on letting outside opinion sway what scripts she chooses. “It's nice to play different people and kind of go into more mature rolls as I grow,” Lohan says.

Age may also put a distance between Lohan and the party girl reputation she's gained over the past couple of years. “You want to be written about to an extent obviously, but you're putting yourself in a place where people are going to put you on a pedestal. And sometimes they build you up to try and take you down, but that teaches you to work harder and I'm in it because it's what I love to do,” says Lohan.

Just My Luck releases in theaters May 12.