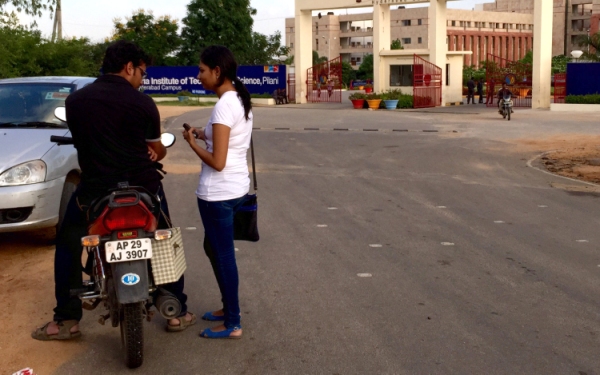 Students are seen outside the BITS campus in Hyderabad, India, where students used a cellphone app to monitor their stress, do relaxation exercises and communicate with counselors.
(Credit: Shashank Bengali/Los Angeles Times/TNS)

HYDERABAD, India — At some point during his four years at the Birla Institute of Technology and Science, one of India’s most prestigious universities for aspiring engineers, Edwin Anthony got lost.

The Indian electronics student suffered from fatigue, mood swings and bouts of anxiety that kept him from focusing on his studies. Normally quiet and even-keeled, he became grouchy with friends and found himself arguing with his parents on the phone.

“I would try to sit and study, and I ended up flipping through books, but I wasn’t in the mood to do anything,” he recalled.

Anthony couldn’t shake it off until a new program led by Stanford University showed him and other students how to manage stress using one constant in their lives: their cellphones.

In a three-month pilot project this year, about 200 students at the Hyderabad campus of the Birla Institute of Technology and Science, commonly known as BITS, and another city university used a cellphone app to monitor their mental health and communicate with counselors by phone and text.

Anthony, a serious 22-year-old with oversize hipster glasses, had never considered visiting the part-time counselor on campus, partly because he didn’t know any students who did.

The program helped him see that his anxiety stemmed from the realization that engineering, which his parents had encouraged him to study, was not a field he enjoyed.

“By the third month I had very good control over my emotions and the way I handled stress,” he said. “It showed. My friends would say, ‘How are you so calm and composed?’

“There was an evolution of sorts.”

Mental health is a quiet crisis in India.

The country, with about 16 percent of the world’s population, has one-third of all the globe’s recorded suicides, according to World Health Organization statistics from 2012. The rate is highest among Indians 15 to 29 years old. Only 43 government hospitals serve more than 70 million Indians suffering from psychosocial disorders such as schizophrenia and depression, according to New York-based Human Rights Watch.

Kumudini Velanand, a counselor in Hyderabad, a magnet for students because of its top-flight universities, said young people face intense pressure to excel.

“Each and every family wants their child to be an engineer or doctor, whether they want to do it or not,” said Velanand, who counseled students as part of the Lantern project. “Even if they did well in high school, once they come to college and they are put in with hundreds more students, they find it very difficult. But they can’t talk to their parents about it, and they are reluctant to tell their peers.”

Bringing the cellphone app to the southern India city was the brainchild of Nitya Kanuri, a 25-year-old research assistant at the Stanford School of Medicine, whose Mana Maali initiative, which means “gardener of the mind,” aims to increase access to mental health services for Indian university students.

The day the pilot program was introduced at the leafy, modern BITS campus north of the city, Kanuri said, she and administrators were “overwhelmed” by the interest from students.

Students completed an initial survey on their phones to measure their stress levels and did daily exercises on the app, like deep breathing and muscle relaxation. Counselors recruited from Hyderabad and other Indian cities conducted phone conversations with students and then checked on their progress through text messages.

Smita Sharma, the part-time counselor at BITS, said online therapy is cheaper than training more counselors and meets the confidentiality needs of students.

“This is very much in step with managing that stigma, where you can reach out to somebody and help yourself in the privacy of your room,” she said.

The project had an immediate effect: BITS has increased funding for Sharma’s position, and in the new school year she will increase the number of days she visits the campus from one to two a week.

Kanuri, who is tracking students’ progress as part of her initiative, plans to expand it to several other Birla Institute campuses.

Lantern, which also has research projects going in Australia and New Zealand, is at the vanguard of the emerging field of online self-help. Megan Jones, Lantern’s chief science officer, said the company’s studies show that the program helps users reduce anxiety levels by 40 percent.

“For some, this will be enough to reach their full potential,” she said. “For others, they may benefit from further help, including therapy, and a positive experience with Lantern just might help increase the likelihood that they seek it.”

Anthony, who has branched out and begun an internship in computer science, doesn’t rule out seeing a therapist later if he needs to. Although he didn’t tell his parents about the program until it ended, some of the tools — like an exercise in mindfulness, which emphasizes, among other things, savoring each bite of a meal — have helped him greatly, he said.

“I learned I was worrying too much about my future and not living in the present,” he said. “Over the course of the program I learned to relish the moment at hand.”