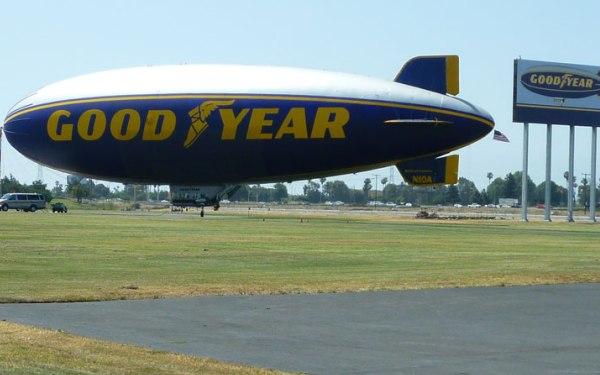 The Goodyear blimp Spirit of America at rest at its Carson base.
(Credit: South Bay Daily Breeze)

On her final flight, the Spirit of America did not go down easily.

The Goodyear blimp had sailed gracefully down the Pacific coast from Carson flashing the message "THANKS FOR THE MEMORIES, CALIFORNIA." But when the pilot tried to land her in front of a towering World War II-era hangar in Tustin, the aging airship seemed to revolt.

Matthew St. John, who has been flying the Spirit of America for the last eight years, struggled to get her onto the ground. He pushed hard against his chair, applying the full force of his body on the pedals that control the blimp's rudders.

At the same time, his right hand spun what looked like the wheel of a wooden wheelchair back and forth to control the ship's pitch. ("It's a very analog, mechanical aircraft," he said.)

On the dashboard for this last flight, St. John had taped a photograph of himself as a little boy, fishing in south Florida. Off in the distance, a Goodyear blimp is visible. Using the company's archival records, he determined that the gondola on the blimp in the photograph was the same one he was sitting in for the last time.

Thirteen people were waiting on the ground to pull the buoyant blimp down to Earth. Six of them ran in a V-formation and grabbed two long ropes that dangled from the blimp's nose and used all their weight to make sure she kept her nose to the wind. Another six grabbed on to the gondola, and one jumped inside to add ballast.

"No," said the blimp's chief mechanic, Steve Dien. "She doesn't want to go into that door over there."

It was as if she knew what was going to happen inside.

For the last 13 years, the Spirit of America has been a consistent presence at college football games, major league baseball games and red-carpet events. She has flown celebrities such as Conan O'Brien and Ice Cube and delighted thousands of people who have driven past her home base just off the 405 Freeway in Carson.

But for the 27 pilots, mechanics, electronic technicians and riggers who tend to the airship's every need, the blimp is more than a novelty — she's family.

The close-knit team follows the blimp in a caravan of trucks and vans wherever she goes. When she's back at the base, they make sure at least one person keeps watch over her at all times — 24 hours a day, 365 days a year.

Even at rest, the blimp is a needy aircraft. The helium inside the balloon expands and contracts depending on the weather. When it's sunny, the volume increases, making the ship lighter; when the sun moves behind a cloud or goes down for the night, the ship becomes heavier. To make sure a blimp stays at equilibrium, with its single wheel bobbing gently on the ground, someone has to add or remove bags of metal shot to or from the gondola.

"This volume of helium will react to half a degree temperature change," said Jim Crone, chief of the airship repair station at Goodyear's headquarters in Akron, Ohio. "Our guys have to put up to 1,000 to 1,500 pounds of weight on it when the sun comes out."

Carlos Preza, an electronics technician who has been with the Spirit of America for six years, says keeping watch over the airship is like taking care of a child.

"That's what I tell people," he said. "I gotta go babysit the blimp."

And now that baby was about to be "decommissioned" — or, to put it more brutally, she would be dismantled, deflated and cut into pieces.

Spirit of America's death sentence came after a routine test of the thin, rubberized polyester fabric that is examined every year. The lab analysis revealed that it had been worn down by the sun and the elements. The damage wasn't dire, but it was enough to signal that the blimp would need to be retired in a year or two.

In the past, the team at Goodyear would have overhauled the gondola that hangs beneath the blimp and put on a new envelope in Akron. But this time, Spirit of America, the oldest ship in the small fleet, was headed for a different fate.

The company, which has three blimps in service in the U.S. at any time, plans to stop flying the old, analog GZ-20A model blimps like Spirit of America over the next couple of years. In September, the last of the old ships, Spirit of Innovation, will arrive in Southern California and be flown by the Carson crew until its next ship is ready for service. Then Spirit of Innovation also will be decommissioned.

The new airships will be faster, longer and more maneuverable. Instead of pulling levers and toggles attached to pulley systems, pilots will use a joystick.

"The new ones are definitely more digital and computer-driven," St. John said. "But this one, whatever the winds are doing across the ship, you actually feel it, so you can't help but develop some kind of affinity with it."

Over time, the ship's controls have come to feel like extensions of his own limbs.

"It's sad to see it go," he said. "It's like having a car of which right now there are only two in the entire world, and you have a team of mechanics that spend all their time making sure it is tippy-top, and you have someone watching it 24 hours a day, even on our days off — and then there comes a day when you have to say goodbye."

Goodyear has made updates to its airship design over the years, but in black-and-white photographs, the Spirit of America looks almost identical to her predecessors from the 1930s and '40s. Some of its refurbished parts date to 1924.

"It's the end of an era," said Kevin Helm, an aerospace engineer and amateur aviation photographer who took the day off work to witness Spirit of America's final flight. "It's one of the last of an entire generation of Goodyear blimps, which are really an American icon."

It takes six to 10 months to build an airship, but just two days to take one apart.

The Spirit of America's final flight took place on a Monday afternoon, and by 10:30 a.m. on Tuesday the team was already halfway through breaking down the ship to get her ready for deflation. They had removed one of the hulking tail fins, as well as the 30-foot-tall grid of LED lights.

Some of the people dismantling the ship were the same ones who helped build her back in Akron in 2002, including Dien.

"I know every inch and nut and bolt of this ship," he said. "It's emotional."

As elements of the blimp were stripped away, bags of lead shot were added to the gondola to keep the blimp from floating to the ceiling.

The crew removed one pristine engine and then the other. These will be used as spare parts. The gondola, which first went into service in 1979, would be sent to Chino, where it would be donated to the Planes of Fame Air Museum.

"I'll definitely be taking the kids to see that," St. John said.

Spirit of America's deflation was scheduled for 8 a.m. sharp on Wednesday.

A few minutes beforehand, the crew gathered in front of the blimp to take an official photo. A drone hovered overhead, capturing video. To commemorate the moment, Dien had placed a single red rose on the airship's instrument panel inside the gondola.

Just before 8, Tony Sanico, a rigger who recently celebrated his 30th anniversary with Goodyear, rode a hydraulic lift up to a circular helium valve in the center of the ship's bright yellow "Y." A colleague rode a lift to a corresponding valve on the opposite side of the blimp.

They opened them at the same time, and helium began emptying out of the ship — slowly, silently and almost imperceptibly.

By 8:02, the hydraulic engines had gone silent and only the drone continued to buzz. The tail started to droop first. A few minutes later, the letters "G" and "O" on the tail end of the craft began to sag.

No one said much. Some stood with their arms crossed, others offered comforting pats on the back.

At 8:09, six members of the crew pulled a giant rip cord on the side of the airship, opening a large panel on the top and releasing the remainder of the helium into the hangar.

This time the gas was visible — it had a sheen like gasoline fumes, and the force of its escape dislodged bird feathers from the top of the hangar, scattering them about.

The people in the hangar were perfectly safe. Because helium is lighter than air, it sailed directly up and out into the atmosphere. There were no Mickey Mouse voices.

The collapsing ship made a crinkling noise as its layers of fabric folded in on themselves. By 8:11, the ship's cone had dropped to the ground. By 8:12, its gondola was buried under 8,000 pounds of envelope.

The Spirit of America had deflated.

The crew kept working, breaking down the ship like whalers carving a carcass: cutting away connective cables to remove the tail fins, using blades to slice away the Goodyear name and logo for return to Akron, preserving the cockpit for display in Chino. A few men on the maintenance crew searched for graffiti they had scrawled on the blimp during inspections, cutting out small souvenir keepsakes.

Sanico stepped away and sat in a trailer outside the hangar.

He needed a few minutes alone, to mourn.