USC's marching band not for the timid, freshman finds 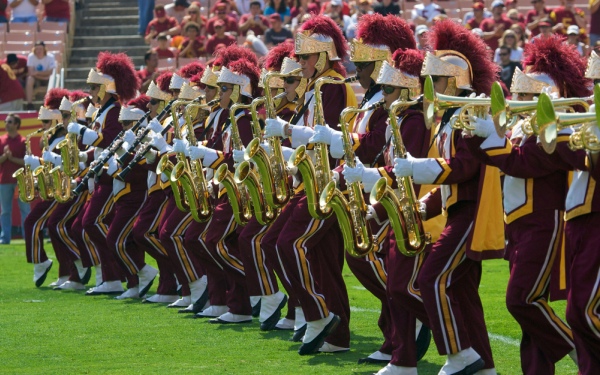 Mounir Ghabrial saw his first college football game after moving from Dubai to Southern California when he was 12 — and soon found watching USC's halftime show more entertaining than the action on the field.

He played the drums during games at Damien High School in La Verne but decided after being accepted at USC for the fall term that he'd give up music to pursue a business degree.

Then he saw the USC Trojan Marching Band drummers perform at the Coachella Valley Music and Arts Festival and changed his mind.

He arrived on campus nearly a week before other freshmen to try out for one of 15 open drumming spots with the USC marching band, a.k.a. the Spirit of Troy.

USC's marching band — which has played for a pope, presidents and countless football fans — accepts students with no musical experience as long as they are willing to learn and don't mind lugging props instead of playing if they are deemed not good enough to march on Saturdays.

"We try and find a place for everyone," said Arthur C. Bartner, who is going into his 46th season as band director.

The only exception is the drum line.

"You can get away with it in other places, but you can't hide a bad drummer," Bartner said. "That's the pulse of a band. If that isn't tight, your band can't be tight."

On game days, nearly 250 students decked out in cardinal and gold band uniforms perform the school's fight song after each touchdown and execute intricate choreography while playing pop hits during halftime.

Combined, the practices and performances, which have included Super Bowls and recording "Tusk" with Fleetwood Mac, can be a grueling experience.

Band members can get one academic credit for the minimum of about 10 hours they put in each week during the fall. Until recently, a volunteer chiropractor helped them deal with the strain that carrying instruments takes on their bodies.

And at least three times a week, during long practices, Bartner watches over them from a platform, loudly correcting the slightest misstep.

But being in the band also has its perks.

Select members travel to all away games, and the entire band goes when the Trojans play Notre Dame in South Bend, Ind., every other year. The band has traveled to Shanghai, Berlin and Amsterdam, and has its own full-time travel coordinator as well as two student managers who help with logistics.

The adrenaline of performing is almost addictive, many say.

Nwajei used to play in front of 250 people at his Houston high school. When he was about to march onto the field at the Los Angeles Memorial Coliseum for his first USC home game, he said, there was an ESPN camera right in his face.

"That's when I realized I'm not in high school anymore," Nwajei said. "It was scary, but it was awesome."

The band's camaraderie can be a draw as well.

Natasha Fernando played for her high school band but didn't try out when she got to USC last year. When she saw her friends who were in the band, "They always seemed to be having so much fun," she said.

So she auditioned this year, hoping for a spot playing bass drum. "I just missed it," she said. Still, she has a spot in the band — playing cymbals.

Drum line tryouts are judged by Tad Carpenter, the band's percussion instructor, as well as student leaders and graduate assistants.

"You think you're good until you get in the room and you're playing all by yourself. And then you start to hear all the things you should've practiced more," said Jessie Jimenez, a junior from Delano, Calif., who said that during his audition, he hit the side of the drum a few times instead of the center.

Jimenez got a spot on cymbals as a freshman but recently was assigned a bass drum.

Ghabrial waited nervously outside the audition room until his name was called. He had his sights set on a snare drum position.

When it was his turn, he banged out the notes flawlessly. His audience barely reacted. But when Ghabrial left the room, Carpenter and the others turned to one another. "He was good, right?" someone asked, and Carpenter started to laugh. "Oh, yeah. He's real good."

The next morning, Ghabrial was assigned one of six snare spots to see if he fit in. He and the other potential new members were shown the USC Trojan Marching Band way to stand at attention, march and hold drumsticks.

"Don't flex or squeeze them," one instructor said.

When the group reassembled after lunch, Ghabrial was still on snare.

"Congratulations, freshmen. I'm glad you made the line," Bartner said.

Ghabrial reacted as if he wasn't sure what he'd just heard. Then Carpenter stepped to the front. "Heels together. Sticks up and out," he said, surveying the musicians.

Ghabrial hit his drum with his right stick and smiled slightly.