Character Study: Guy Pearce and Danny Huston Talk About the Complexity Within The Propostition 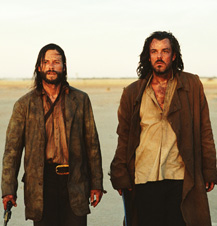 Set in Australia in the late 19th century, The Proposition combines violent sequences, panoramic cinematography and distinct characters to make for an extremely provocative story set amidst a rolling Australian landscape.

The film stars Guy Pearce ( Memento ) and Danny Huston ( The Constant Gardener ) as Charlie and Arthur, respectively – who are brothers as well as two out of four members of the pillaging Burns Gang. A power-hungry Captain Stanley (Ray Winstone) captures Charlie, and makes him a proposition: if Charlie goes out and hunts down his brother, Arthur, in under 10 days, then Captain Stanley will spare both of the brothers' lives.

According to Huston, who plays the fugitive leader of the Burns Gang, he was drawn to Nick Cave's script mostly because of “the possibility of exploring that kind of character. He is a little psychopathic from time to time but he also has a strong sense of family and cosmic sense of the world. He's got a gentle heart. He's complex, beautifully written,” says Huston, who, in real life, comes across as a soft-spoken, gentle individual.

“If you look at generals or leaders who lead their men into war, rape and pillage are one of the awards. Lately, we're looking for a fair general or good general and you don't have to go that far in time to understand that kind of savagery. Arthur in that regard is a savage … man,” Huston continues.

At the end of the film is a provocative and morally repugnant scene which Huston informs was quite risky. “But, I don't think he's one of a necessarily [immoral or bad] people. This is kind of delicate. I'm the actor who is stepping into this man's world; so, I may be justifying acts which are heinous and really don't require justification.

“But, he's not reveling; he's not enjoying the [violent and provocative scene at the end]. He just doesn't regard her as anything and his young soldier should be able to enjoy himself in moments of victory and the more he can humiliate Captain Stanley, the more victorious he is and Captain Stanley would do the same to him.”

For Huston, the “humiliation” that he wants Captain Stanley to endure overrides the actions of his younger brother and poses a larger dilemma of morals and imperatives. “Looking at Australia or world history for that matter, there was cannibalism at turn-of-the-century Australia, life was hard and it wasn't what we regard as civilized,” Huston informs.

“[Nick Cave's] really holding the film with both hands, the scriptwriter and composer; it's very much his film. In the most primal sense, a storyteller is a man telling a story in front of a fire … casting shadows on the walls of the cave, dramatizing his story. A director, an actor, a painter do the same thing.

“When designing a character and telling a story, it's the same process [trying to keep the stakes high]. Tell a tale. Tell a lie. You're dramatizing a story. That's what filmmaking is,” says Huston about writer Cave's amazing ability to have crafted such a complex film.

Alongside Huston, Pearce delivers a contained performance, showing restraint and determination. “I was a big fan of Nick's and I knew [the film] was going to be beautifully written. To me, I think people sometimes write scripts in a very structured, formulaic way to satisfy the financiers. They tell me, ‘Ignore this bit of dialogue,' ‘ignore this line here,' ‘it's just there to satisfy the producers.'

“Nick's script was like an old book somewhere. As far as understanding the essence of it, it was really provocative. It was beautifully written,” says Pearce.

Indeed, both Huston and Pearce show similar enjoyment of the project and commitment to its content and unique blend of character development and plot. Both show their understanding of a multitude of traits and qualities in their respective characters. Violence and humanity are not mutually exclusive, they say.

“Even the first time I read screenplays, I mark out anything I dislike. I get through the stuff. This doesn't feel right; that doesn't fit. To me, the beauty of the film is telling a story without saying anything,” says Pearce. “‘What's the least we can say to get across the most effect?' Because I think that's a philosophy that is more effective.”

The Proposition releases in select theaters May 5.