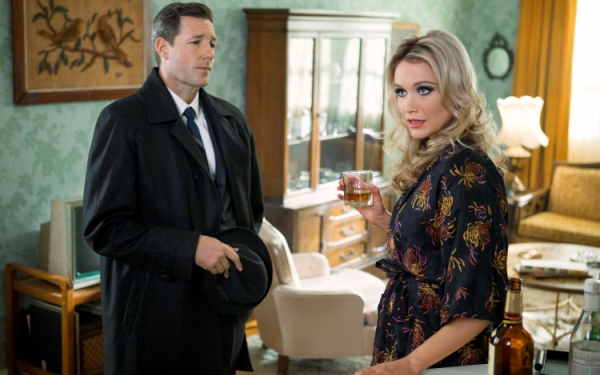 “Public Morals” is proof that even in this time of television’s Great Overcrowding, one should never judge a show by its genre.

In theory, Edward Burns’ tale of cops ‘n’ gangsters mingling and mangling on the mean streets of circa-1960 New York is the last thing we need. Add a zombie menace and/or a female character Fighting to Be Taken Seriously, and you have a show so close to modern drama du jour it risks becoming parody.

Except it doesn’t, not at all. “Public Morals,” on TNT, is a picaresque, briskly written and quickly captivating series that is neither afraid nor ashamed of entertaining its audience. Though it deals with its genre’s big issues (the difference between law and order, the danger of defining oneself through loyalty), “Public Morals” does not fall prey to the current epidemic of Televisionous Prestiguous (symptoms may include swollen monologues, lethargy and sensitivity to normal light).

Instead, with a touch so light it defies gravity , Burns simply tells a story that he knows — his father was a New York cop — in the way of storytellers he admires. Martin Scorsese is, of course, fully accounted for in careful choreography of sudden violence and hierarchy of menace; the calmest, most gracious character, in this case a mob boss played by Brian Dennehy, is always the most dangerous. The influences of Steven Spielberg, who serves as executive producer, also make themselves felt in the scenes of family dinner and parent conferences with the nuns, in the newsboy caps of street kids who say things like “I ain’t got no muddah.”

But the fulcrum is all Burns, who created, writes and stars as Terry Muldoon, the unofficial organizer of the NYPD’s Public Morals Division, a team defined by its relationship to the city’s Underworld.

Handsome, genial, devoted to family and friends, Muldoon is, of course, on the take. As he explains to clean-cut newcomer Jimmy (Brian Wiles), who might just be a rat, most of the jurisdiction Public Morals covers is ridiculous. Does any real cop think he’s going to end prostitution by busting a couple of hookers and their johns? Does anyone really care if a few “queers want to play grab-ass” or if people like to gamble their money away in high-stakes games?

No, of course not. But the city needs to remain peaceful. Public Morals is there not to eradicate this type of crime but to manage it. “Think of us as landlords,” Muldoon says. “If you want to do business, you have to pay the rent.”

He and his less-talk-more-action partner Charlie (the always excellent Michael Rapaport) make it all look so easy. When he isn’t lecturing a john, from whom he just took a bribe, to leave New York hookers alone, Muldoon’s letting his son know that sassing Sister is the first step on the road to the wrong side of the street.

With his wise-guy squint and husky tenor, Burns sells the sincerity of his character if not his world view. This is not a broken hero, but a practical one. In another set of circumstances, Muldoon could be a politician, or a mob boss.

That is, of course, the point, as it almost always is in stories about lawmen and lawbeakers. That line is so darn thin, especially in a place like this version of Hell’s Kitchen, which, with its mostly Irish population, is so insular that Muldoon’s uncle, Mr. O (Timothy Hutton) is the local numbers man as well as the father of Sean (Austin Stowell), a member of Muldoon’s team.

And, indeed, Mr. O is about to set off a series of events that destroys the calm that Muldoon and his crew have maintained for so long. New players are on the scene, with big ambitions and little deference to the old codes.

Mercifully, Burns is in no rush to hit a hard-R rating or prove some big point about the changing state of the nation. The show may lean digital in distribution — the first four of 10 episodes will be available online after the premiere — but the narrative unfolds the old-fashioned way, with multi-layer stories full of, but never overwhelmed by, colorful characters, archetypal themes and small odes to genre.

Muldoon is in constant but loving battle with his wife over parenting techniques and her desire to move to the suburbs, Charlie becomes the protector of a young prostitute, and everyone tries to figure out whether Jimmy can be trusted. On the other side of the law, prodigal son Rusty (Neal McDonough) has returned to his aging father/crime boss Joe Patton (Dennehy) with predictably incendiary results.

It all flows swiftly across the screen in oversized taxis and a chorus line of shot glasses and beer bottles, propelled by a men-wearing-hats syncopation that nods to the films of James Cagney and Edward G. Robinson but doesn’t kowtow.

Out of memory, myth and the inevitable allure of mayhem, “Public Morals” creates its own cinematic world, as inbred and self-curated as the most lived-in, teeming New York neighborhood and just as much fun to visit.