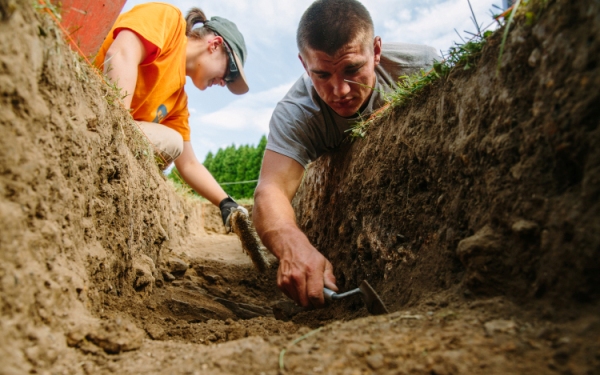 LIGONIER, Penn. — “Nail,” Evan Wingenroth said as he dug in a shallow trench outside the walls of Fort Ligonier, a, 18th Century British fortification from the French and Indian War.

The senior at Juniata College, in Huntington, Penn., held up a dirty, corroded bit of metal. His find did indeed look like a nail. It had a wide head and then tapered to a point.

The next challenge would be to determine if it was a modern nail or something dating back to the construction of the fort in 1758, Matt Gault said. Gault is assistant director of education at Fort Ligonier, where Wingenroth and nine other students were taking part in a two-week archaeology field school.

The Westmoreland County dig, part of a course called “Clash of Cultures” at Juniata College in central Pennsylvania, was the first excavation at the French and Indian War site in 20 years. The effort was led by Jonathan A. Burns, director of the college’s Cultural Resource Institute, and Andrew Dudash, reference librarian at Juniata’s Beeghly Library. They worked with Erica I. Nuckles, Fort Ligonier’s director of history and collections, and Brad Mooney, owner of Heritage Restorations and an expert on artillery pieces.

The students’ goal was to find the remains of a wooden palisade — known as a “line of communication” — constructed outside of the main stockade. The wall, which is shown on a 1758 map of the British fortification, provided protection for soldiers assigned to an artillery battery guarding an approach to the fort.

The efforts of students and interns such as the ones from Juniata College are important to the operation and improvement of public and nonprofit historic sites across southwestern Pennsylvania and elsewhere, officials say.

“It’s a wonderful partnership,” Nuckles said of the arrangement with Juniata. “This part of our site has never been excavated. We’ll benefit from new information and with new items for our collections, and the students will benefit in getting education and experience in field work.”

The summer’s work ultimately could lead to locating and reconstructing the 18th century artillery position outside the fort, she said.

One of the things that college students and interns bring to museums, historic homes and battlefields is a new perspective.

“We get to see our operation through the eyes of an outsider,” Karen Parsons said. She is the office manager and volunteer coordinator at the Depreciation Lands Museum in Hampton, Penn.

“I make sure they learn a little bit of everything,” curator Sarah Buffington said of the students who work at Old Economy Village in Ambridge, Penn. “And we get a lot more done when they are here.”

Among the items uncovered at the Fort Ligonier dig was a brass bell from a horse collar and several musket balls that likely date to the mid-18th century. That was the era when Great Britain, France and Native American tribes battled for control of thousands of square miles west of the Allegheny Mountains. The French and Indian War, which effectively began in 1754, in Fayette County, Penn.’s Jumonville Glen, was part of a worldwide struggle for colonies and resources.

Juniata students found hundreds of small glass, ceramic, metal, mineral and animal artifacts at Fort Ligonier as they excavated in several trenches looking for evidence of the 1758 wooden wall. While they could remove the top layer of grass and soil with shovels, much of their digging was done with hand trowels. During the first week of the dig, the trenches were roughly 12 to 24 inches deep.

The date when each item was found and its location were written down before the artifacts were taken to a nearby house for cleaning — often with toothbrushes — and closer examination. Burns estimated that about 5 percent of the artifacts found during the dig would prove to be from the period when the fort was built.

Abigail Sites, a sophomore at the University of Pittsburgh who took the Juniata course, spied what turned out to be a wooden button as she sifted soil from one of the trenches. An anthropology major, Sites said she was glad for the opportunity to learn field techniques. “I’m not just picking up rocks anymore and thinking they’re artifacts,” she said.

Kristin Kopera is a junior from Clearfield County majoring in geology at Juniata. Her summer experience has included time spent examining different kinds of soil and rock layers. That skill should help her with any sedimentology courses she likely will take as part of her major.

Burns and his students have done similar digs at other French and Indian War fortifications across Pennsylvania. They have included the sites of Fort Littleton in Fulton County and Fort Shirley in Huntingdon County.

“These kinds of projects offer mutual benefits,” Burns said. “Students get field training at an exciting site, and Fort Ligonier will have more accurate information to base their future reconstructions upon.”

At Old Economy Village in Beaver County, interns from Mercyhurst University in Erie, Penn., and Mansfield University in north-central Pennsylvania helped with packing, moving and photographing artifacts in the historic site’s extension collection.

Among the treasures the students worked with were intricate displays of wax flowers made by the Harmonists in the 19th century and modeled on local plant life. Three of those arrangements have been moved to the Old Economy visitors center, where they will remain on display through the fall, Buffington said. “What interns learn here reinforces what they are learning at school,” she said.

Old Economy Village is run through a partnership between the Pennsylvania Historical Museum Commission and the nonprofit Friends of Old Economy Village. Its state-owned collection of 19th century buildings tells the story of the communal Harmony Society.

Rebecca Schratz, a senior at Mercyhurst majoring in history, spent much of her summer at the Depreciation Lands Museum collecting, creating and organizing materials in a 9-foot-tall display case. Her project includes items used by Native Americans and by white settlers in what became Hampton, Penn.

Modern Hampton was part of a much larger 1,100-square-mile area north of the Allegheny and Ohio rivers known as the Depreciation Lands. It took its name from the action by the Pennsylvania legislature to set aside land for Revolutionary War soldiers. The veterans received frontier land grants for their military service rather than paper money that had depreciated, losing much of its value.

On a recent afternoon. Schratz was sewing a small doll from scraps of cloth. Her handmade doll, which will be part of the new display, is similar to the kinds of simple toys available to children on the Pennsylvania frontier, she said.

Her display also pays tribute to the Indian’s “Three Sisters,” the squash, corn and beans that were essential to the Native American diet.

Schratz said she had gained a greater understanding of how tough and dangerous life was for both the indigenous tribes and the European settlers. “People had to work really hard just to assure that they would be able to wake up the next day,” she said.

Burns said he was pleased with the results of the first Juniata dig at Fort Ligonier. The students found evidence of several post molds — the spots where wooden timbers had been sunk into the ground for the palisade wall.

“Two weeks isn’t a long time,” Burns said of this summer’s field school. “We’re hoping we can return next year.”

Campus News
In the Noah’s Ark of citrus, caretakers try to stave off a fruit apocalypse
100 views