Vance Joy on playing stadiums with Taylor Swift: 'It's been a trial by fire' 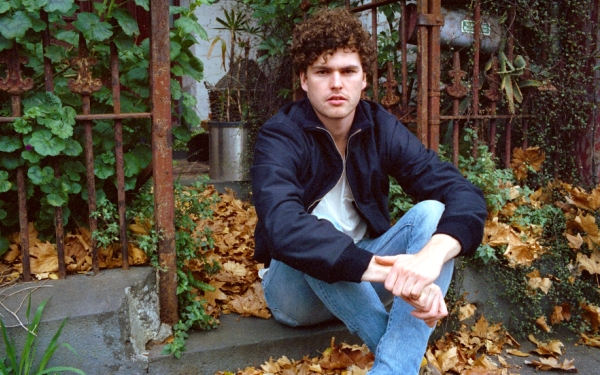 That's how Vance Joy described his decision to sign on as one of Taylor Swift's opening acts on her massive "1989" tour, which completes a five-night stand at Staples Center on Wednesday. But the opportunity didn't come without challenges for this 27-year-old singer-songwriter from Melbourne, Australia.

Best known for his scrappy folk-rock hit "Riptide" — a favorite of Swift's that she's also performed live — Joy was successfully building an audience even before pop's biggest star came calling. Yet as he admitted this week in a chat at L.A.'s Ace Hotel, he hadn't had much experience playing the arenas and stadiums that Swift fills.

Were you worried at all that your sound, which is kind of homey and acoustic, wouldn't translate to these enormous spaces?

I was maybe too sure of myself, actually: "Taylor Swift's fans are super-enthusiastic — this'll be easy-peasy." But after a couple of shows it became clear that playing to this audience is different from playing to people who know all my songs. Taylor's fans will often know "Riptide," maybe a few other songs. But they don't really know much about me.

How have you adapted?

It's been a trial by fire. The goal is just to be yourself, which you think you've got down pat. Playing for 100 people in a room, you can mumble into the mike and say a few things and nothing's missed. But playing for 20,000 people and getting them to be engaged? You need to really project and be like, "Hey, I'm here!" Over the last 30 shows I've been taking steps out into that void; I'll try to get the whole crowd to clap along or hold their phones up.

Thousands sang along to "Riptide" at Friday's show.

It's a moment, yeah.

Is it for you still? You've played it so many times at this point that I wonder if you're able to relate to what you were feeling when you wrote it.

It's hard. I get in touch with the people loving it and with that feeling. From early on it's been like this thing I've got in my pocket, this nice little gift. But you stop thinking about the fact that you wrote it, you know? It goes from a song you wrote to this thing that's in a book. You open up the book, and you play the song.

What's your favorite moment in your set?

Probably my song "Fire and the Flood." Or "Georgia." That one felt like another magic moment when I wrote it. That's a rare kind of rush. I dug, and I found the right spot.

That's how songwriting feels to you.

Sometimes. You just turn up and do it every day, and occasionally you get really excited about something that turns out to be a red herring. There's a lot of that. But then you do get one and you put it in your bag.

The stakes are high on this tour — it's a huge audience full of potential fans. Do you feel that when you're onstage?

In a way. But now that I've sort of learned some of the little showmanship things, it's slightly more relaxed. It's not my show, so I can just have fun with my half-hour set and then watch Taylor's show.

How many times have you watched her?

A lot. At least 20 times. And some songs more than that; I've seen "I Knew You Were Trouble" like 28 times.

That's my jam, and it's just a really epic moment in the set.

It kind of reminded me of Nine Inch Nails.

Exactly. I love the reimaginings of the songs. I love the dancers. And I love the effort she puts in. That's the other thing: Expectations are higher on this tour because the standard set by her is really high. Seventy-five shows, two hours every time. And at all these L.A. shows she's having special guests, which means she's singing a new song every night. That's kind of crazy.

Have you always been into big pop acts?

I've always gravitated toward songwriting, anything where it's like, "Wow, that's really good — how did they do it?" I can appreciate the tricks. With pop music you want to write songs that everyone can like. Some of it's a bit cheesy or heavy-handed, but I don't think a song is diminished by the fact that everyone likes it.

There's always stuff — maybe a few songs at a radio station. And we have to get to the show early. If the venue is in the middle of nowhere, it's the bus, then catering, then hang out, then play the show. If it's a place like [Staples Center], we'll try to do something to get away from the venue for a bit. But you can get really used to room service and hotel TV. I think maybe it's lowering my IQ. The other day I was watching "National Lampoon's European Vacation," and I was like, "This is really good."