Is L.A.'s traffic the worst in the U.S.? Depends on how you measure it 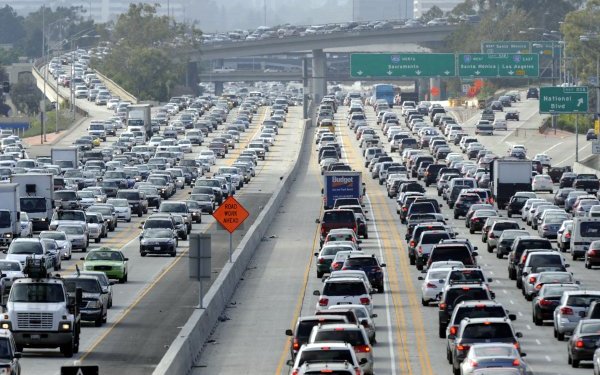 For those who assume Los Angeles has the worst traffic in the United States: Not so fast.

Drivers in Southern California spent a whopping 80 hours sitting in traffic in 2014, according to a new report by the Texas A&M Transportation Institute and the traffic data company Inrix.

But the city with the dubious distinction of most time lost behind the wheel is Washington, D.C., researchers say, where commuters clocked 82 hours of delays in a single year.

Even though the difference is negligible — two hours, or 10 minutes per month — not coming out on top can feel strangely disappointing for Angelenos who feel much of the their lives are spent behind the wheel, the study's authors said.

"The last time I told people in L.A. they weren't No. 1, they got upset," said Jim Bak, an Inrix traffic analyst. He said attitudes among Angelenos tend to sound something like this: "If we have to suffer, we at least want to know that we suffer the most."

To reach their conclusion, analysts pulled data on delays and traffic speeds from loop detectors embedded in the freeway systems of the U.S.'s 100 biggest cities. In Los Angeles, they also used the systems that track travel times and delays on major surface streets.

The silver lining for proud gridlock sufferers is that Southern California still has some of the most miserable stretches of freeway in the United States.

Los Angeles freeways claimed 11 of the 25 worst spots, including the top offender: the southbound 101 Freeway from Woodland Hills to downtown L.A.

During the most congested hour of the week — 8 to 9 a.m. on Wednesdays — drivers spend an average of an hour and a half to travel 26 miles. The 101 wrested the title of “worst road” from a perennial favorite, the Cross Bronx Expressway in New York City, Bak said.

"If you drive that road every day, you waste six days a year in traffic," Bak said. "That’s basically the length of a vacation."

Other top-ranked freeway bottlenecks include: the northbound 101 from downtown to Sherman Oaks; the eastbound 10 Freeway from Santa Monica to downtown; and three sections of the 5 between Irvine and downtown Los Angeles.

The severity of L.A.-area rush-hour delays remained greater than in any other city. Trips during peak commuting periods here took 43% longer than during non-peak hours. That means an hour-long drive at noon is closer to an hour and a half trip at 6 p.m.

Traffic delays cost Angelenos an average of $1,711 a year in lost wages and productivity, Bak said.

Drivers in Southern California saw a slight dip in congestion during the Great Recession, when fewer people were commuting to 9-to-5 jobs. But in L.A. and across the country, traffic has rebounded to 2008 levels, Bak said.

A report released last week by the U.S. Department of Transportation mirrored that finding: In the first half of this year, Americans drove 1.54 trillion miles, topping a record set in 2007.

Said Bak: "We’re really starting to get to the point where the problems of L.A. are not isolated to L.A. anymore."

Trump could win, says GOP strategist after talking to the candidate's supporters