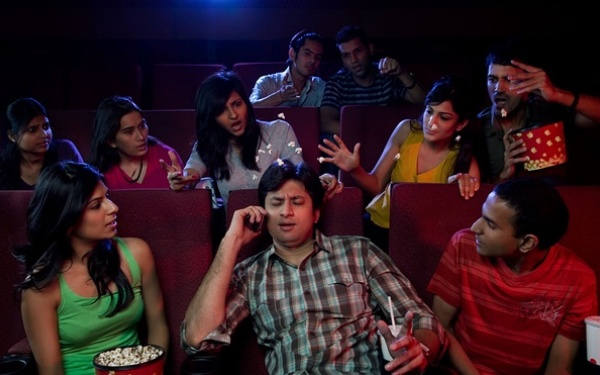 The Pew Research Center tackled the issue in a report released Wednesday, which found that many Americans have contradictory — and often complex — relationships with their phones.

“Everyone has their own stories about how annoying it is to see people use their phones in the wrong place and the wrong way,” said Lee Rainie, one of the report’s authors and director of Internet, science and technology research at Pew. “This speaks to some of the biggest issues of the human condition: It’s how we interact with each other and the character of public spaces.”

The report found that 9 out of 10 adults have their cell phone with them at all times, and most between the ages of 18 and 29 see no problem pulling out the gadget in crowded public spaces.

Ninety percent of young adults surveyed said they are “generally OK” using their cell phone on public transit, 78 percent are fine using it while walking down the street, and 11 percent at a movie theater or other places that are “typically quiet.”

The survey also found that the constant state of being connected has changed attitudes about when it’s considered OK to shift attention away from human interactions and dive into digital ones.

Cell phones “have disrupted long-standing social norms about where you should allocate your attention and presence,” Rainie said. “It’s now possible to be physically present in one place but connected to another at any time.”

Eighty-nine percent of respondents said they used a cell phone during the most recent social gathering they attended, and 98 percent of those surveyed between 18 and 29 used the device while in a social situation.

The “always-on” mentality, especially among younger users, has irked some some social scientists, who worry that cell phones, and smartphones in particular, hurt human interactions.

Studies have also shown that cell phones make it harder for users to multitask — talking while driving is the most obvious example — and some researchers believe that the devices, which are meant to connect people, ultimately make them more isolated.

Eighty two percent of all adults in the Pew survey said when people focus on their phones instead of their companions, it at least occasionally hurts the conversation and atmosphere. Thirty-seven percent said it “frequently” hurt the gathering.

“There are real costs of using cell phones in any kind of situation where you’re multitasking,” said Ira Hyman, a psychology professor at Western Washington University. Hyman performed one study where he strung money up to a tree with low hanging branches and watched as people on their cells ducked around the bills.

Mobile phones also provide a level of social connection unheard of in the past, which can be a double-edged sword, especially for young adults. The Pew survey found that people between 18 to 29 are much more likely to use their cell phones as a means of both engaging and disengaging during social functions.

More than half the people in the age bracket reported using a cell phone for social reasons at a recent gathering: 55 percent used texts, e-mail or social media to share something that took place at the function; 53 percent posted a photo or video; and 51 percent looked up information that they thought would be interesting to the group.

More than a quarter of the young adults surveyed also turned to their devices out of boredom, and a fifth said they hoped that their mobile phone could shield them from the conversation.

In contrast, only 31.5 percent of 50- to 64-year-olds used their cell phones for clearly social purposes or to add to the gathering, but they were also much less likely to turn to the devices to check out.

“The challenge is the technology is always evolving, and as the technology evolves so to do the social norms,” said Lee Humphreys, associate professor in the Department of Communication at Cornell University. “You can’t say cell phones are categorically better or worse, though; of course they’re both.”