We Are Your Friends director Max Joseph on Zac Efron, EDM and that thing called stress 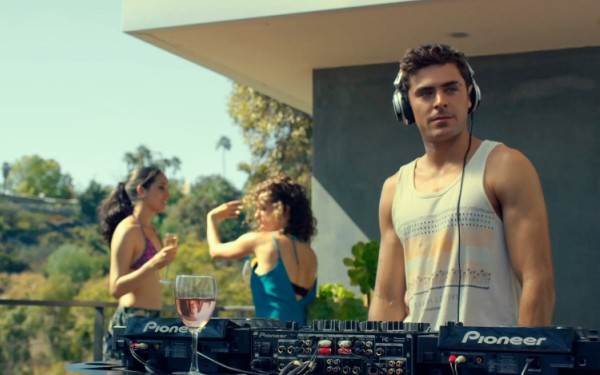 He was warned against working with Zac Efron: "Don't. Be careful. He's a party kid."

But Max Joseph didn't pay much mind to the rumblings. Because Joseph's on the MTV show "Catfish," where he "spends all day, every day, talking to kids in their early to mid-20s who are going through stuff."

Joseph has counseled dozens of millennials over the four seasons of "Catfish," where he and co-star Nev Schulman travel the country helping online daters track down the real-life versions of their cyber paramours. Joseph has always been Schulman's sidekick, because Schulman was the subject of a hit 2010 documentary in which he was duped by a middle-aged mother posing as a 19-year-old blonde. (The popular documentary led to the TV series.)

While their brotherly banter has proved elemental to the show's success, Joseph is definitely the second banana — toting around a handheld camera and often filming the action instead of participating in it.

That wasn't the case on the set of "We Are Your Friends," Joseph's directorial debut out Friday. The film, which Joseph also co-wrote, follows four twentysomething club promoters trying to escape their monotonous life in the San Fernando Valley. The most promising member of the crew is an aspiring DJ (Efron) who catches a break when a famous industry veteran (Wes Bentley) decides to mentor him.

This was not Joseph's plight. He grew up in Brooklyn Heights. His father was a financial advisor, and his mother was a corporate lawyer. He attended Manhattan's private Dalton School and went to college at Brown University.

And then, when he was 19, he discovered the Valley. He'd scored a summer internship at Ridley Scott's production company and needed a place to crash, so he reached out to an old friend who lived in Reseda — "a really socially adept guy who was kind of an operator." The buddy obliged, and Joseph spent the summer observing his friend's fast-paced life.

"He was dealing weed, and he and all his friends were promoting these clubs on Hollywood Boulevard where they'd be paid by the head," recalled Joseph, 33. "They'd be speeding on the freeway, taking bong hits, then screech to a halt next to a car full of girls in a convertible and get their numbers. I was shocked by it. This was some really mature, precocious social hustling."

Soon Joseph found himself adapting to his Valley bro's way of life — getting high, smearing himself with cocoa butter, ordering spicy tuna on crispy rice at strip mall sushi joints.

"He turned me on to Katsuya," Joseph said, sitting at the restaurant's Studio City outpost this month, his distinctive mop of silver hair modestly gelled.

After college, when he moved out to L.A. permanently to try to make it as a filmmaker, Joseph settled in West Hollywood. (He now lives in Santa Monica with his wife, a Brazilian fashion blogger with whom he speaks only Portuguese.) But his summer in the Valley stuck with him, especially as he found himself hustling to make ends meet working for television directors.

Just when he thought he was making some headway in the industry — one of his short films was accepted to the Sundance Film Festival in 2010 — he found himself lagging behind his buddies whose documentary "Catfish" made a splash at the Utah fest that year.

"I was overcome by extreme jealousy," Joseph admitted. "I just watched the whole industry descend on them, and I felt kind of bad about myself for a while. Like, 'What have I been doing with my life? Where's my feature?'"

Of course, Joseph didn't know then that "Catfish" would also serve as his launching pad. A few months later, Schulman asked him to costar in the television version. He wasn't supposed to have a major role on the program; initially, he was primarily relegated to cameraman. But he soon proved to be an integral part of each episode, serving as the skeptical older brother of sorts to Schulman.

"I remember once, at the end of Season 2, I was really worn down, and Max made a suggestion about an investigation that I thought was silly, so I rolled my eyes," Schulman recalled. "He got up and said 'Well, Nev, if you're going to be a jerk and tell me my ideas are bad, I'm not going to do this.' Then he got up and walked out of the room in a gentlemanly way."

Schulman said he proceeded to lose his temper, throwing his cellphone across the room and watching it "smash into a million bits." A few minutes later, Joseph came back in the room and calmly told Schulman that such behavior was isolating the crew.

"It was a real wake-up call for me and a defining moment in our friendship," Schulman said. "He cared about me enough to break down something so sensitive."

Just as Joseph was showcasing his ability to stay cool under pressure, he got a call from Working Title Films, the British production company behind films like "Les Miserables" and "The Theory of Everything." The company was interested in making a film set in the world of EDM — electronic dance music — and because Joseph was so familiar with Gen X, execs thought he might be the right guy for the job.

Immediately, the budding filmmaker thought of his summer in the Valley and decided to set the action on its hot pavement.

His budget wouldn't be big — less than $6 million — but Working Title gave Joseph the creative freedom to make less conventional filmmaking choices. "We Are Your Friends" showcases numerous perspectives — sometimes characters speak directly to the camera, other times there's voice-over. The camera work is shaky and fast, and graphic text and animation frequently pop up on-screen. And there's music — lots of it, pumping energy into critical scenes.

"I told the [director of photography] that the movie should feel like someone just went nuts with ideas," Joseph explained.

The director put together a sizzle reel showcasing his visual style to help lure actors to the project, and Efron and Emily Ratajkowski — at the time a model best known for her topless turn in the "Blurred Lines" video project — responded. Efron, who has spoken openly about his problems with alcoholism and time in rehab, is much in demand as an actor coming off his critically praised role as a vengeful frat boy in the comedy hit "Neighbors."

"And then I was worried for a bunch of reasons," Joseph said. "All of a sudden, this has turned into this high-profile movie, and a lot of people are paying attention to my first movie, which I could easily [mess] up. It sounded like the worst movie ever! The EDM movie of the year starring Zac Efron directed by the sidekick of 'Catfish' and starring the girl from 'Blurred Lines'? But I don't think it's what people think."

There has been some backlash online from the DJ community from those who feel the industry appears overly commercialized in the film. Joseph said he was embarrassed to admit how much that criticism hurt him and insisted he needs to grow a tougher skin. But his colleagues say, at his core, Joseph is a sensitive soul.

"There was a lot of pressure on both of us — me as a new actor and he as a first-time director," said Ratajkowski, who plays Efron's love interest. "This was really his baby, and I could feel that energy from him. But sometimes I think he plays up his nervousness to make you feel a little bit more comfortable."

Joseph had to skip a handful of "Catfish" episodes this season to finish editing his movie — guest cohosts filled in — but he feels like the show may be "nearing the end" of its run anyway.

"Being on 'Catfish' helped me a lot in making this movie because I observed how the crew worked," he said. "And it puts me in the center of the millennial generation. Every kid knows how to do everything. These kids are making cool stuff on their iPhones — we need to catch up. That tidal wave of talent and that new lexicon — that needs to translate onto the big screen. I don't think it really has yet, and I want this movie to be the new vocabulary."

Emily Ratajkowski gets serious about that 'Blurred Lines' video

Screenwriter Diablo Cody follows her muse to 'Ricki and the Flash'

We Are Your Friends opens in theaters August 28.