All that Jazmin: A newcomer to fashion world looks like a star 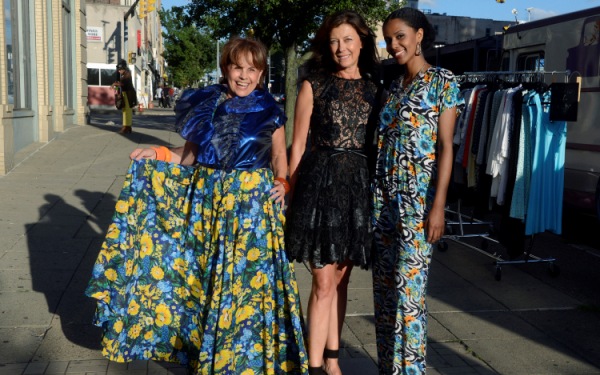 If you don’t know designer Jazmin Jackson, get acquainted with the name. It’s apt to keep popping up in Pittsburgh fashion — and beyond.

At the recent third annual Style Week Pittsburgh, Jackson’s line, Jazmeen, was featured at the opening night fashion showcase. She also was a nominee in the designer of the year category at the local 2015 Style Awards.

But for Jackson, who launched her label in 2012, being a designer isn’t just about creating clothes that look good. It’s about trying to do some good in society. With aid from The Pittsburgh Foundation and The Heinz Endowments’ Advancing Black Arts in Pittsburgh grant, Jackson started the Supercool Tour, an interactive life skills seminar geared toward teen girls that uses fashion and the arts to promote self esteem and careers in science, technology, engineering and math (STEM). She also works part time as a graphic designer and operations support and information specialist for Tickets for Kids, a nonprofit that provides in-need children and families with tickets to cultural and creative activities.

“I’ve always loved designing,” says Jackson, who’s been sketching looks since age 10. She learned how to sew from her grandmother, a seamstress who worked in sewing factories and sold her pieces in boutiques in Atlantic City, N.J.

In high school, Jackson further sharpened her fashion skills by designing her prom dress and creating a few professional looks for college. (She graduated in 2008 from the University of North Carolina at Chapel Hill with a degree in business administration and studied costume design, couture sewing, draping and pattern making in the school’s Master of Fine Arts costume production program. She moved here after graduation and now resides in the area.

“I don’t like shopping to this day,” she says, adding that it’s often difficult to find fashion-forward apparel that fits a tall frame with curves like hers. “That was one of the reasons I wanted to create clothing for women who have different body types.”

In addition to a flattering fit, her pieces are known for their vibrant kaleidoscopic prints, which Jackson digitally creates and then has transferred onto fabrics she uses in her designs. She’s also a member of TechShop Pittsburgh, where she’s learning laser cut and embroidery techniques to incorporate into her line.

“It’s very rewarding to be able to make something from scratch,” she says.

These days her other “passion project” is prepping for the Supercool Tour, which will travel this fall to schools and youth groups across the city and to New York. Rather than a traditional fashion look book, in which highly stylized models (sometimes in sexualized or submissive poses) are photographed in a designer’s collection, Ms. Jackson produced a photo book where the girls wearing her clothes are shown engaged in activities such as rock climbing, changing a tire or working in a science lab. Teens will compare the images depicted in her book to ones in photo spreads from high-fashion magazines so they can learn to recognize the differences in how the models are portrayed.

“It goes back to the lack of positive imagery that you see of women in all forms of media,” Jackson says. “I want to make them aware.”

The workshop also will explore how STEM concepts can be applied to problem solving in the fashion and beauty industries, such as determining what properties make a fabric good for wicking moisture, or how pH levels relate to shampoos and conditioners.

“These are things where they can use science in a fun way,” she says.

She hopes her fashions spread a sense of fun to those who wear them, too. For now, she specializes in limited-edition pieces sold online at Jazmeen.org (about $80-$150 on average for sporty pieces, and approximately $250-$400 for dresses). She’s interested in aligning with some local boutiques so she can expand the reach of her business and its impact.

“It’s always good to hear from other people that your clothes make them feel good.” she says. “I definitely see opportunities for it to grow.”