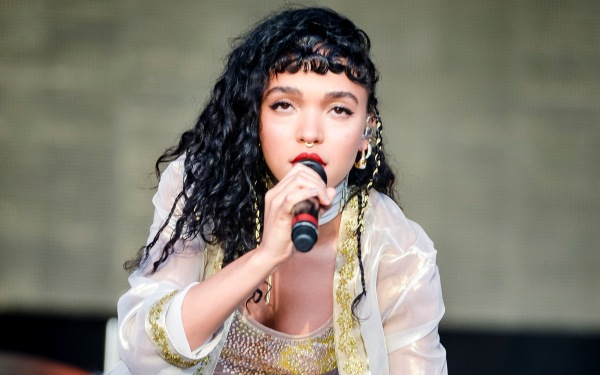 The recent FYF Fest in Los Angeles was long on young men making all kinds of noise: ecstatic, squeaky, dull, thrilling and obvious. But the harshest sound I heard came near midnight on Sunday, during the last 30 minutes of the festival.

A woman wearing a leotard and Nike Studio Wrap sandals walked — slow and deliberate enough to make it a vamp — across the stage. A stretch of crackling, furiously loud pink noise broke the silence.

The sound came from the woman in sandals — FKA Twigs, a British artist who has moved quickly into a position of visibility, even without anything like a hit song on American charts. Her audience in L.A. was surprisingly silent and attentive through much of her set — as much a series of choreographed dance pieces as songs, many of which are amorphous enough to obscure what is verse chorus (if such divisions mean anything to her).

That blast of noise introduced “Figure 8,” a song from the new FKA Twigs EP “M3LL155X” (pronounced “Melissa”). Her voice, as it often does, stuck to her upper register, occasionally drifting into full falsetto. The words were delivered in clumps, spaced far apart: “Let me live, through your vice, mass appeal.” She was shepherding her energy, centered on stage and moving only slightly, while staring directly at the crowd.

It was one of the few times Twigs was without her dancers during the performance called “Congregata,” which she had presented in longer form this year in London and Brooklyn.

The set piece during Congregata happens during the song “Numbers,” from 2014’s “LP1.” At FYF, Ricardo Jorge Eduardo Fernandes, a.k.a. “Dominant,” leader of the krumping crew Wet Wipez, began the song above Twigs, who lay on the stage. He swung his arms and lowered himself, vaguely hostile while maintaining a safe distance. This segued into a sequence that came fairly close to replicating a classic krump battle, with Twigs and Dominant throwing out their chests and scissoring their arms, flirting with a fight that never started.

A few days after the FYF show, Twigs, legally known as Tahliah Barnett, sat in the rooftop garden of Soho House, in a metallic workout vest and black tights.

“I made that sound on a Tempest,” she said about the “Figure 8” moment, referring to a hybrid drum machine and synthesizer made by Dave Smith, and a new favorite of studio boffins. She co-produced the song with Jordan “BOOTS” Asher, best known for his work on the self-titled album Beyonce air-dropped on a Friday night in 2014.

What she made, in a larger sense, is a performance in which dance is integral. “Congregata,” she said, is the name she uses “whenever I take my dancers with me to tell a story.”

Her six dancers — Dominant, Benjamin Milan, Mamadou Bathily, Kaner Scott, Ross Sands and Denzel Daniels — work in distinct styles that Barnett, along with the dancer and choreographer Aaron Sillis, manages to subtly transform and blend together.

Other pop stars now deal with dance as an option, not a central aspect of the art. For a solid 50 years or more, dance was fused with the music, for the alphas: Madonna, Michael, Janet, Prince, James Brown, TLC, and any boy band of your choice. (Even the Beatles had a mild unison move or two in the beginning.) Now, pop stars will sometimes engage in choreographed movement, but posing does the trick much of the time. Taylor Swift, most rappers, even the reigning boy band, One Direction — none of these stars are dancing their way through a set, give or take a few songs.

Twigs was raised in rural England and trained in ballet, though, as she said, “I knew I was never going to be a ballet dancer … . I didn’t have that facility. I did enjoy it, but I always knew that my body wasn’t made to do that. I have flat feet, curvature in my spine, I can’t do some things that ballet requires you to do, but I can jump high because my Achilles are long, and that’s an aspect of my heritage.”

Her approach to her own moves and her dancers is unusual in pop; she openly credits the various communities she’s learned from and continues to work with. “I’m so hungry to learn. I always have been,” she said. “I don’t think it takes anything away from me to talk about the people that I’m inspired by.”

She’s worked on voguing with dancers like Milan and still attends kiki balls in New York, where dancers critiquing each other in the moment is embedded in the experience. A year or so go, Dominant brought Twigs to work with some of L.A.’s better-known krump dancers, like Miss Prissy, at a youth center, but Barnett said she was “too shy to get up and dance.”

Prissy is friends with one of the dancers who helped lay the foundation for krumping in L.A., Larry “The Clown” Berry. Berry studied under Tommy the Clown, and both appear in David LaChapelle’s 2005 documentary “Rize,” the reference document for krumping, as the 1990 film “Paris Is Burning” is for voguing. A few weeks ago, I met Berry at his home on 114th Street in Watts. On an unnaturally hot Saturday, we sat in his car, which, unlike his mother’s house, was air-conditioned.

Berry credits Tommy the Clown for building the foundations for krumping by establishing a space on the corner of Imperial and Crenshaw in 1992, known as the Academy. “It was for kids to come and practice and do dance sessions,” Berry said, “something different than the basic thug mentality stuff.” The core of krumping, as described by Berry and Amanda Martinez, another dancer who has worked with Twigs, are several key moves, which can be combined with any number of improvisations.

“In krumping, you get more chest pops, arm swings, stuff like that,” Berry said. “You get a lot of facial expressions and raw energy. It’s more like you’re fighting, but you’re not hitting nobody. It might look wild, but it’s very controlled. You’d be amazed how people actually don’t get hit in a krump session — you know to back up. If you ever went to one, you’d see the organicness and roughness in it. But it’s all love.”

For children’s parties, this form is toned down somewhat and performed in makeup, which Berry still hates putting on. “You gotta do what you gotta do, but I can’t stand it, honestly,” he said. “In ‘Rize,’ they said clowning and krumping were different, but the only difference is that clowns had to do parties and see kids. That’s the only thing. The music’s faster with clown dancing. They speed the music up for parties.”

The dance form reached London, where it took a stronger hold than it did in New York. Dominant and his Wet Wipez crew became allied with Twigs several years ago.

Twigs’ tendency to synthesize movement and music can be seen in the video for “Glass & Patron,” a song from “M3LL155X.” The Congregata version at FYF replicated some of what you can see in the video, though with different dancers. Twigs and Milan did rapid vogue hand movement around their heads, shuffling forward together while squatting.

The “bonebreakers,” Bathily and Scott, bent their arms and legs through and behind their torsos, creating MC Escher versions of the human body that made you constantly reassess which limb you were looking at. None of what Twigs and her dancers do is the pure version of any of these forms — what makes the work exciting is that she allows her dancers the room for extremity that commercial work restricts. (Both Martinez and Berry have worked in videos and commercials, for artists like Miley Cyrus and companies like Samsung, but you’d be hard pressed to find traces of krump in their movements.)

The final dance at FYF was choreographed to “How’s That,” a song from her 2013 release, “EP2.” When she describes the story of the dance later, at Soho House, she’s solidly pragmatic about her future. (Raised on an infinite number of documentaries available on YouTube, young musicians are much less likely to believe a career in music is a long-lasting or solid thing.)

Twigs described the dance she and Sillis created, which saw each of the dancers menacing Twigs with their signature moves and then running off stage. Several times, Twigs chased the dancers and then stopped herself. When all of the dancers had left, she went to a small platform centered upstage and collapsed, followed by the lights cutting out.

“That dance signifies everybody leaving,” she said. “Everybody leaves you and you do get abandoned. You can put somebody’s name out there and help them get noticed and they’ll get work and build a career from dancing with you and go off and do their own thing. In the end, you’re the one that gets stabbed in the back. It’s like with your mom. You don’t realize how much washing and cleaning she does. You can seem ungrateful sometimes, because you don’t realize how much she’s doing for you, even when you don’t call her back that day. That’s the end bit, that thing of being thrown around, and at the end you’re completely by yourself. It’s sad, but it’s also kind of beautiful.”

Though she’s spent most of the time describing her band and her dancers and family, this feels like a protective move, predicting a breakup of her creative team that isn’t even near to happening yet. Is it?