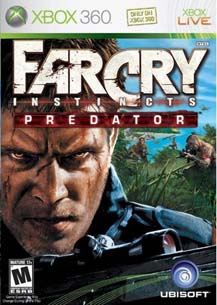 Welcome to the jungle, where the hunted adapt or die. And in “Far Cry Instincts Predator,” dealing with your environment – as well as scores of mercenaries looking to do you in – is the key to survival.

In this first-person shooter, gamers are dropped into the boots of Jack Carver, a roguish boat captain who quickly finds himself in over his head, washed under by a wave of trouble. He uses his guns, wits and even some unnatural abilities to stalk those stalking him.

This should sound familiar to players of “Far Cry Instincts” that was released last fall for the original Xbox. It's the same old story.

Unfortunately, the game is itself a bit of a failure to adapt and grow. “Predator” doesn't offer sweeping changes over the version that docked last fall. The Xbox 360 version is definitely prettier – rippling clear-blue waves are a sight to see – but some elements still look a bit dingy.

The gameplay remains intact, though. This fight is a rough challenge – your foes are smart, merciless and can take a few rounds to the chest before dropping.

All of this is topped with solid online play and a pretty decent map-making tool. It will take some time to create your own perfect jungle battlefield, but this feature is a gold mine for online shooters, offering nearly limitless replay value, although “Far Cry Instincts Predator” probably won't be played as much as it should be because of the glut of shooters available for the Xbox 360.