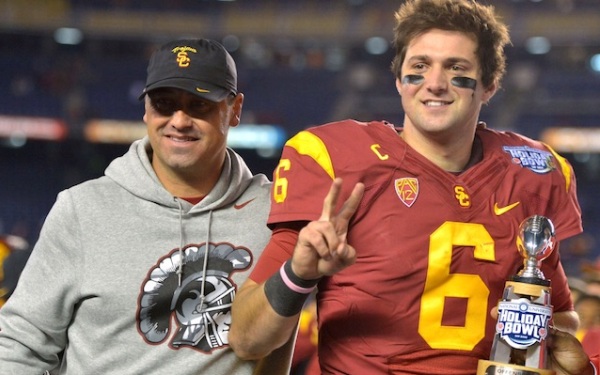 Pac-12 projections to the division races:

1. Oregon: Do I think Vernon Adams will experience the same success against Pac-12 competition now that he's facing it week after week? Nope. But the Ducks' system and supporting talent -- the upperclassmen were signed by Chip Kelly in the immediate aftermath of the national title appearance -- will be enough to outlast Stanford for the North title.

2. Stanford: Gave serious thought to picking the Cardinal to win the division because I believe quarterback Kevin Hogan will have an exceptional season, Christian McCaffrey is the real deal and the tight ends are fabulous. The defense will be better than you might expect with just three returning starters. But it won't be quite good enough to win the North.

3. Cal: Should be high-powered on offense and better on defense. (If the Bears aren't markedly better on defense, then there is something intrinsically wrong.) But Cal's three league wins in '14 were against teams with a combined conference record of 4-23. Jared Goff and Co. were a long way from competing consistently with the top tier. They'll make up some of that ground, but not all of it.

4. Washington State: Gave WSU the edge over team from Seattle based on slightly greater degree of quarterback stability. Just 7-20 in league play, Mike Leach needs a big season. He won't get it unless the Cougs can run the ball.

5. Washington: Two things are equally true: 1) Chris Petersen wasn't given much to work with offensively by his, ahem, predecessor, and 2) He hardly showed the coaching chops needed to compete for a title in this conference. Still too early for judgment. Check back in Nov. '16.

1. USC: Good things usually happen when you combine an elite quarterback with a powerhouse line and playmakers like JuJu Smith and Adoree Jackson -- even when the head coach is "going to go to treatment." Trojans should be talented enough to overcome their own (inevitable) gaffes.

2. UCLA: The most talent in the conference over 21 positions, but the quarterback situation makes me hesitant to project a division title. If Jeff Rosen plays like a rookie, the Bruins will be decent. If he plays like an upperclassman, they'll win the league. Oh, and Jerry Neuheisel? He's the South's version of Jeff Lockie.

3. Arizona State: Should have one of the best defenses in the conference. The other two units? Let's wait and see. Mike Bercovici was terrific in the spot-starter role, but the permanent gig is a different deal. Devils could finish first or fifth -- I have no feel. But were they in the North, I might pick 'em to win it.

4. Arizona: The defending division champs have been largely overlooked as a contender despite a returning quarterback (Anu Solomon). The reason? One could argue the '14 success was as much about good fortune than anything (the Hail Mary, catching Oregon at the right time, UW's mismanagement). Or maybe RichRod will prove schmoes like me wrong once again.

5. Utah: Plenty coming back for the Utes, who should be a notch deeper, faster and better as Pac-12-era recruits come to dominate the roster. But I won't believe Utah has the efficiency it needs at QB in this division until I see it on display weekly in October and November.

6. Colorado: It was never a two- or three-year rebuilding job for Mike MacIntyre and his staff. Class after class of substandard recruiting by his predecessors, combined with the hellacious division, make CU's climb from the gutter a long one.