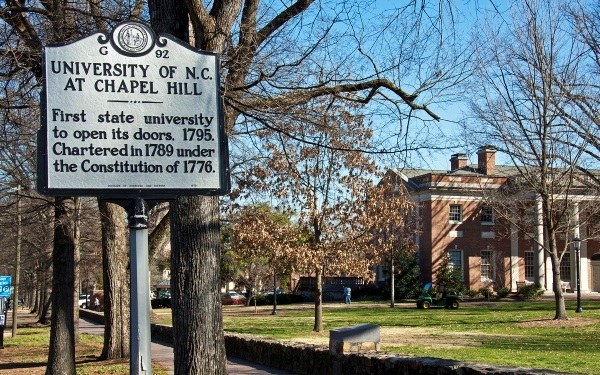 CHAPEL HILL, N.C. — A University of North Carolina-Chapel Hill course about the 9/11 terrorist attacks has gained national attention after critics claimed the class is taught from the perspective of radical Islamists instead of victims’ families.

In a post on the website www.thecollegefix.com, Alec Dent, who identified himself as a UNC student, wrote that a seminar titled “Literature of 9/11” focused on those who view the United States as an imperialist nation.

“The reading assignments for the class, which includes poems, memoirs and graphic novels, present terrorists in a sympathetic light and American political leaders as greedy, war hungry and corrupt,” Dent wrote.

Required readings included “Poems from Guantanamo: Detainees Speak” and “Sirens of Baghdad,” according to a list of textbooks for the class on the student bookstore website.

The issue was picked up by Fox News and several publications with a conservative bent. Word spread on Twitter and Facebook, where angry commenters decried UNC.

Dent, who apparently did not take the class, reviewed assigned books. The class, offered as a seminar to first-year students, is taught by Neel Ahuja, associate professor of English. The UNC website said the course would “introduce students to college-level critical analysis, writing, and oral communication by exploring representations of the 9/11 attacks and the ‘war on terrorism’ in literature and popular culture.”

In a statement released Monday, UNC spokesman Jim Gregory wrote that the seminar is voluntary and one of 80 on myriad topics.

“The University isn’t forcing a set of beliefs on students; we’re asking them to prepare for and engage in every lesson, debate and conversation, and share what they think,” Gregory’s statement said. “Carolina offers academic courses to challenge students — not to advocate one viewpoint over another.”

At least two online commenters who said they took the course disagreed with Dent’s assessment.

One of them, identified as Alec Dragelin, a UNC graduate from Charlotte, wrote on the College Fix site that the blogger missed the mark. Gregory confirmed that Dragelin had been enrolled at UNC in 2011.

“I am a conservative through and through but having actually taken this class, I could not disagree more on what you are saying,” Dragelin’s comment said. “This article is nothing but gossip about a great course taught by an amazing professor. It is entirely untrue to claim that this course presents America as imperialist. Additionally, through most of the semester and even in my final paper I actively disagreed with some of Neel’s opinions. He in turn welcomed my arguments. As such, this course was amazingly valuable because it challenged my opinions and allowed me to explore what I thought I knew in a deeper way. Which is exactly what education should do.”

Another commenter who said he took the class, Austin Parsons, said the class included the points of view of victims and conspiracy theorists among others. Students read “Extremely Loud and Incredibly Close,” a novel by Jonathan Safran Foer, which tells the story of a 9-year-old character whose father died in the World Trade Center, according to Parsons’ comment. Parsons was also enrolled as a UNC student, Gregory said.

The College Fix website is reported by students and describes itself as “your daily dose of right-minded news and commentary from across the nation.”

This week, the site also skewered a women’s studies online course from North Carolina State University called “Women and Poverty.” The site posted a section of the class syllabus that instructs students not to use sexist language or gendered pronouns.

“You may NOT use ‘he’ or ‘him’ or ‘man’ to refer to both men and women,” according to a photo of the syllabus, which suggests words such as “mankind” or “human” or “humankind.” The syllabus says: “Grades will be docked for sexist language in assignments.”

The course is taught by Nancy Bishop, who could not be reached for comment.