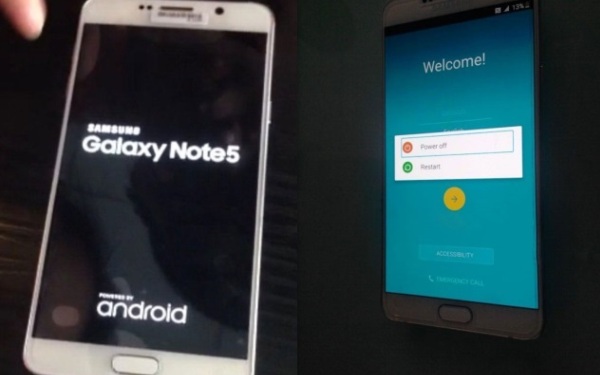 Samsung is looking for the right combination of features to dethrone the iPhone as king of the smartphone world.

Where Apple releases one or two models annually — usually in September — Samsung releases new phones almost monthly. Of course, not all new Samsung handsets are aimed at the top of the market, but a few times a year, Samsung takes a big swing.

August brought the Galaxy S6 Edge+ and the Galaxy Note 5, which I’ve been carrying for the last week.

These two phones are largely the same on the inside. They look alike from a distance, but there are a few differences.

Both phones have a unibody metal frame with glass on the front and rear, which means the bodies are sealed.

The phones are available in 32- and 64-gigabyte versions. Both run Samsung Exynos 7420 processors with eight cores. They’ve got four gigabytes of RAM.

This is a nice RAM bump from the Galaxy S6’s three gigabytes. These phones should perform a bit better than their flagship cousin. They run Android 5.1 (Lollipop) and have a 3,000 mAh battery with fast wireless charging. I had no problem with either phone’s battery lasting an entire day with normal use.

I didn’t have a wireless charger to try, but the included USB chargers were plenty fast.

I ran both phones down to 30 percent and plugged them in. After 15 minutes, they were up to 50 percent, and after 30 minutes they were 77 percent charged. Full charge came in just over an hour.

The S6 Edge+ measures 6.06 inches by 2.98 inches by 0.27 inches and weighs 5.4 ounces. Both have a 16-megapixel main camera with optical image stabilization and an f/1.9 lens. They can capture 4K HD video. The selfie camera is a wide-angle f/1.9 camera with a 5-megapixel sensor.

So these phones are largely the same on the inside. Let’s look at what makes them different.

The Note 5 has a flat screen, and, like the Notes that came before it, a built-in stylus for handwritten input, note-taking and overall navigation.

Removing the stylus from its secure location at the bottom of the phone activates a program called S-Pen, which allows quick access to most of the pen features.

You can create a memo, outline a section of the screen for a screen shot, mark up your screen shots or launch shortcuts.

You can also use the pen instead of your finger for everyday phone use.

The pen is solidly built. There’s a button to bring up the S-Pen app, and the pen has a click top just like a real ballpoint pen, which keeps it locked in the phone when not in use.

There are other S-Pen-compatible apps that take advantage of the stylus input.

I found it nice to use the pen instead of my fingers to give my screen a break from fingerprints.

If you remove the pen when the phone is asleep, you can create and save quick action notes without unlocking the phone. This is one of the most useful S-Pen features.

The back of the Note 5 is glass, and its edges curve upward, making it a bit easier to pick up from a flat surface.

The front glass of the Edge+ is curved along the right and left edges.

Samsung says the screen is designed to bring a bigger entertainment experience. I suppose this is correct, because if you’re watching a video, the playback controls are way down on the edge of the screen, not in your field of view.

The Edge+ also has “edge-specific” features that allow for information to be displayed on the edge of the screen, while the rest of the screen remains dark.

I found this handy for checking the time or even reading a text without drawing attention to what I was doing.

This might be a nice feature to use in a movie theater, but I don’t want readers to think I condone using a phone in a theater. I can say this is the least obtrusive way I’ve seen to check a message or see the time.

When the phone is asleep, swiping your finger across the edge of the screen brings up the edge display information. Then you can swipe up from the edge to change the information shown, such as time, weather, stock quotes, sports scores, notifications of calls, emails and texts. You can also view RSS feeds.

I like the Edge+, but I’m not sure I’m sold on the edge display as being a feature I’d use very much.

Also, I found the display on the Edge+ to be a bit dimmer than on the Note 5’s screen, which was noticeable when they were set for the same brightness setting, including maximum brightness.

I’m wondering whether Samsung thinks it has just one flagship phone anymore.

The current Galaxy S model, like the S6, used to be its flagship phone, with the best and fastest features and components.

But then the company started releasing phones with bigger screens and stylus pens and fancy curved edges. The line is blurred as to which phone should be rightfully called the best.

The S6 Edge+ and Note 5 both have a bigger screen and more RAM than the Galaxy S6.

I guess you and I are free to make our own flagship determination by voting with our wallets. Personally, I’d choose the Note 5 over the Edge+ and the Galaxy S6. The Note 5 has the biggest and brightest screen, and I find it easier to handle.

The Edge+ has sides that curve down toward the phone’s flat back, which makes the edges of the phone sit almost flush on a flat surface.

This makes the edges a bit harder to grasp with fingertips when you’re picking up the Edge+.

The Note 5 is much easier to pick up, and I find its curved back more comfortable to hold. Plus, I can imagine more uses for the stylus than I could for the edge screen display.

The Note 5 and S6 Edge+ are available from all the major carriers.

If your carrier still offers subsidized phones, these start at $299 with a two-year contract.

Bottom line: Great internals, but I’m not a big fan of the Edge screen design.