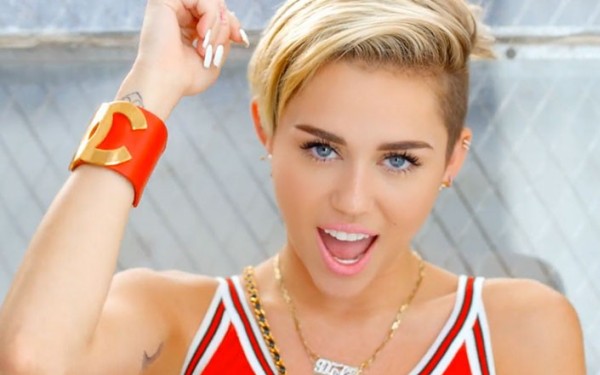 Here, in a nutshell, is the implicit marketing push behind “Miley Cyrus & Her Dead Petz”: With 23 songs full of F-bombs, strange sounds and enthusiastic references to weed, this album is totally crazy — and what makes it even crazier is that it’s by Miley Cyrus, the former Disney Channel star.

Here, in a nutshell, is the truth about “Miley Cyrus & Her Dead Petz”: This album is not very good — and what makes it even worse is that it’s by Miley Cyrus.

Released for free online Sunday night after Cyrus’ gig as host of the MTV Video Music Awards, “Dead Petz” indeed charts a surprising new course for the 22-year-old singer, who not so long ago was making glossy tween-pop records under her own name and that of her Disney Channel alter ego, Hannah Montana.

Gone are the old pop-factory song doctors and their tightly crafted choruses; now she’s cobbling together discursive arrangements alongside left-field collaborators like the Flaming Lips. In her determination to be her truest, weirdest self, though, Cyrus has sacrificed the wild-eyed energy that once marked her as a real rebel.

Given the importance of the VMAs in her career, it’s easy to see why Cyrus returned to the show to unveil her latest project. In 2013, of course, MTV’s annual bash was where she gave the ultra-raunchy performance with Robin Thicke that severed her connection to her squeaky-clean past. And last year, she used the event to create another stir by sending a young homeless man to accept her trophy for video of the year (which she won with her clip for “Wrecking Ball”).

Yet as anyone who’s paid attention knows, Cyrus has put across a nervy intensity in lots of other settings too: on her album “Bangerz,” with its willfully provocative appropriation of hip-hop style; on tour last year, playing rowdy arena concerts suffused with misfit pride; on Instagram, where she condenses worlds of visual complexity to potent bite-size images.

Even “Party in the U.S.A.,” Cyrus’ Kidz Bop-approved 2009 single, and the best of her “Hannah Montana” stuff had a palpable tension, a sense of contents under pressure, that distinguished it from music by her more accommodating peers.

“Dead Petz,” in contrast, offers very little of that, perhaps because for the first time she’s not fighting anyone. A sprawling, self-indulgent collection of experimental music posted on SoundCloud, this record essentially ratifies Cyrus’ creative independence. Its mere existence means she’s won her battle to define herself. And that’s an encouraging development for any artist, let alone one locked at such an early age into an established system of restrictive expectations.

But maybe struggle, as it is for many artists, is Cyrus’ most productive mode; maybe having something to push against is what has allowed her to build the unique muscles that seem so unengaged here.

In “Dooo It!,” the first track on “Dead Petz” (and the song she performed to close the VMAs on Sunday), Cyrus insists that, even though she smokes pot and loves peace, she’s no hippie. Yet the fuzzy emotions and slack pacing of this album suggests that a hippie is precisely what she’s become — a definite disappointment for a woman who used to come across more like a punk.

Who to blame for the mellowing of Miley? To doubt that she’s in control is to embody the very prejudice she’s looking to escape. But her mystifying alliance with Wayne Coyne and the Flaming Lips, a washed-up psych-rock band whose last useful music came out a decade ago, certainly doesn’t help. You listen to a limp acoustic ditty like “Something About Space Dude” and you shudder to think how many tedious late-night jam sessions went into the making of this record.

Fortunately, Cyrus also worked with Mike Will Made It, the Atlanta hip-hop producer (and veteran of her hit “We Can’t Stop”) who knows how to make music that sounds exciting and laid-back at the same time. Together, they explore some intriguing new ground in “Fweaky,” a trippy slow jam with appealingly unvarnished vocals, and the shimmering “Lighter,” which feels like Cyrus’ stab at the current ‘80s R&B revival.

The truly frustrating thing about “Dead Petz” is that it’s not a complete failure. In cuts like the bouncy “I Forgive Yiew” and especially “BB Talk,” a funny, disarmingly intimate number in which Cyrus admits she can’t stand a lover’s public display of affection, the singer provides a tantalizing glimpse of what this album could’ve been. There’s also “Miley Tibetan Bowlzzz,” an oddly beautiful instrumental cut she added to the album, as she recently boasted to the New York Times, after her advisers told her the record was too long. (The punk inside clearly hasn’t died yet.)

But those scattered sparks are overpowered by the aimless noodling that dominates — and deflates — “Dead Petz.”