France train hero picked for "Dancing with the Stars" 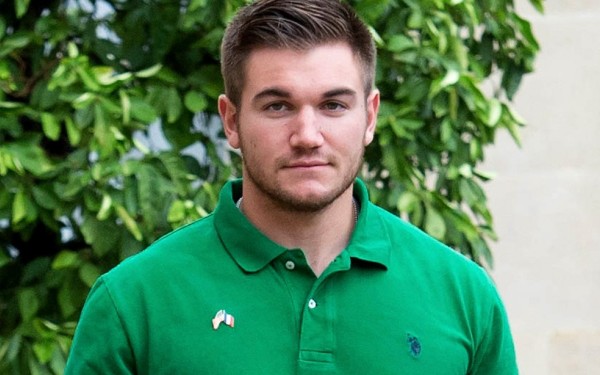 One of three men from Northern California hailed as heroes for subduing a gunman on a French train last month will appear on ABC’s “Dancing with the Stars” in September, the network announced Wednesday.

Alek Skarlatos, 22, an Oregon Army National Guardsman, along with his two friends, Anthony Sadler, 23, and Spencer Stone, 23, tackled the man wielding an AK-47 on a train from Amsterdam to Paris, possibly averting a massacre.

On the show, which premieres September 14 on ABC, Skarlatos will be paired with professional dancer Lindsay Arnold.

Skarlotos — originally from Northern California, who now lives Roseburg, Ore — was on a European sightseeing trip with his friends, U.S. Air Force Airman Stone and Sadler, a student at Sacramento State University. Ayoub El Khazzani, the alleged gunman they stopped, was charged with terrorism last week.

Meanwhile, Sadler appeared on “The Tonight Show Starring Jimmy Fallon” on Tuesday, where he gave a blow-by-blow of the courageous actions he and his pals took on Aug. 21.

“Then a train employee kind of sprints by us down the hallway and that commotion kind of wakes me up and then I look over at my friends and they’re looking back and they duck down, and so I’m like what are they looking at? And then I look back and there’s the gunman just coming in the train cocking an AK and I was like is this real?” Sadler said. “Is somebody playing a joke?”

Sadler continued, explaining how the three ran toward the gunman and brought him down aboard the train.

“Spencer hopped on him, a few seconds later me and Alek were there and then we got to beat him down a little bit,” he said to Fallon.

Fallon also made time to poke fun at the three friend’s stop in Amsterdam before the train ride.

“You’re taking photographs, you’re taking in the art scene there,” Fallon joked. “Of course, that’s what people do in Amsterdam!”

Sadler also made an appearance on and sat for an interview with NBC “Nightly News” anchor Lester Holt that will air Wednesday evening.