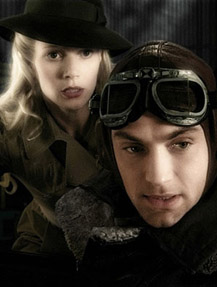 A handful of years before audiences were interjected into the realm of ultra effects-heavy films like the Star Wars prequels and Matrix sequels, Sky Captain and the World of Tomorrow – from first-time writer-director Kerry Conran – was a dazzling six-minute short featuring a fully computerized world and pulp fiction-inspired style. And, while the release of the film – which stars Gwyneth Paltrow, Jude Law and Angelina Jolie – may seem somewhat dated considering the innovations made in computer effects over the last five years or so, Sky Captain and the World of Tomorrow will not disappoint.

Even though the entire film was shot against blue screen inside a London soundstage (everything in the film – sets, effects, locations – are digitally created, except for the actors themselves and anything they physically touch), Sky Captain holds its own on many more counts than its estimated 2,000 special effects (in comparison, The Matrix: Revolutions has around 1,500). The stylishly delicious film also features an extremely talented cast (rounded out by Giovanni Ribisi, Bai Ling and Michael Gambon), inventive sci-fi storyline and intriguing hair, makeup and lighting styles.

Set during the 1940s and centered around a digitalized New York City, the film pairs up the iconic “Sky Captain” Joe (Law) and ultra-nosy newspaper reporter Polly Perkins (Paltrow) as they attempt to uncover the truth behind why a gang of robots as tall as skyscrapers keep finding their way into the city’s center. As they start to collect facts – and Polly nearly gets trampled by a line of relentless marching machines – they realize that the emergence of these robots directly relates to the ongoing, mysterious disappearances of some of the world’s most renowned scientists.

Perhaps the film’s only drawback is the seemingly simple, quasi-cheesy dialogue. However, considering that Sky Captain is also somewhat of a pastiche, bringing in certain elements – particularly physical aspects like lighting and costumes, as well as discourse and delivery – that evoke the look and feel of pulp fiction films of the ’40s, this is probably the point. This clever hybrid of sci-fi, action and special effects, with wonderfully witty chemistry between leads Law and Paltrow, deserves a shot.