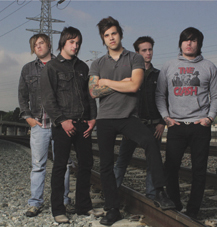 Unless you're living in a black hole somewhere, you know that Fall Out Boy's Pete Wentz is arguably one of today's hottest “it” guys. The goofy, pop-punk bassist has pre-pubescent teens across the globe pining for his affection. So bearing a remarkable resemblance to him can't be such a bad thing, can it? Well, it wouldn't seem so, unless of course you happen to be that guy, who just so happens to be trying to make a name for himself and his own band.

“I have kids come up to me, going ‘sign my CD,' and I'm like ‘what are you talking about,'” says Aaron Thompson, otherwise known as Pete Wentz' twin brother from another mother. “Usually, I just play along, like here you go, I mean, I don't want to be a dick about it.”

Though Thompson admits to finding humor in it all, the situation really does have a plus side if you think about it. He's getting mighty good practice for when his band actually does hit the big time.

And with the amount his band has accomplished thus far, it's only a matter of time.

His band is the Stranger's Six, a 2-year-old five-piece that really draws no other comparisons to the TRL hit maker. In fact, it's the sugar-coated, pigeonholed genre of music that Thompson and his band mates – guitarists Luke Johnson and Thomas Garcia, drummer Garret Eland and bassist Evan Ehrich have tried to stay far, far away from.

“Bands that got huge in San Diego like Unwritten Law and Blink-182, influenced us not to sound like that. We wanted to do anything except what they were doing,” Thompson says. “We all wanted to be more of a rock band in the classic sense, like the Clash, Aerosmith and the Hellacopters, just the stuff that was more open and wasn't set in a little genre where you can just play whatever and it all just be rock, that way if we did something different it wouldn't be so weird.”

By bringing together the band members' prior music experience – ranging from metal to rockabilly to straight up punk – the Stranger's Six has since evolved its poignant brand of rock into a moody and seductive combination of sorts that Thompson describes as anything but “happy.”

“It can be dark and gloomy. It's aggressive and its got attitude,” says Thompson of the bands sound. “Usually if I'm pissed off or mad or sad about something, I'll write about whatever it is at that time.”

His anger infused writing style may induce some raised eyebrows at times, but Thompson says, “Anytime you're going to present something personal, you leave yourself open for people to take shots at you or interpret you wrong, but you can't worry about it. You can't half ass it, you either go for it or you don't.”

With the upcoming album, A Date With Daylight – the follow-up to its debut The Inaugural – now finished, the members of the Stranger's Six are hoping, that all their touring will soon be paying off, with a record deal.

And why shouldn't they get the break they deserve?

After all, the members of the Stranger's Six are relentless when it comes to pushing themselves to the next level and proclaim to be one of the hardest working bands in the San Diego area.

“All of our tours we have booked ourselves, we got ourselves on the radio without any help, we've got on all these shows in San Diego we don't have an agent or a label or a manager or anything,” Thompson says. “We just try to bust our asses off. If no one is going to help you, just do it yourself and make shit happen.”

Even a stretch of bad luck isn't likely to stop the fivesome from doing everything in their power to expose their music to as many people as possible. A recent tour, proved this.

“We call it the Bad Luck '06 Tour,” Thompson says. “Our van broke like four times. We were stranded in Lake Havasu, Tucson and Vegas, and every time we got help from weird, sketchy people who came out of alleys and poured gasoline on our engines to make it work,” he says.

The band members have since moved on, focusing solely on the future.

“I just want to be able to keep putting out records and be able to not come home – ever,” he says.

“Seeing bands like Bad Religion and Social Distortion play when you're like 15 and 16, when you're at the show and that's it, it's the best thing in the world. It was like wow, I want to be that person who's up there instead of down here. Now, I get to do that and it's pretty awesome.”

The Strangers Six will perform May 9 at the Key Club, in West Hollywood. For more information, visit www.myspace.com/thestrangerssix .