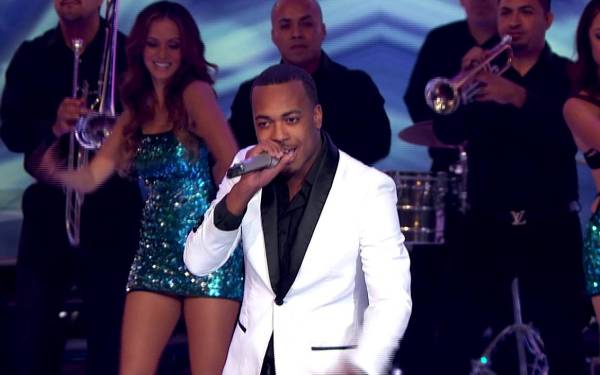 Women in heels and short dresses hold firm to men wearing cowboy hats and belt buckles larger than iPhones, moving to the norteño song as if it were written especially for them.

You have a body, El Compa sings, beautiful like a mermaid's.

If anyone's appearance in the San Bernardino nightclub might be more unusual than a mermaid's, it is the man holding court: Rhyan Lowery, a.k.a. El Compa Negro; a.k.a. the black buddy (a.k.a. the only black man in sight).

And in case anyone hasn't noticed that fact, the 19-year-old's manager is there to point it out, several times, like a carnival barker: "El primer afro americano de la música mexicana."

"We're selling a concept," says Antonio Lopez, manager and backup singer for the Compton teenager. "We're selling the beauty of someone from another race that is doing things and doing them very well in a market that's not his."

Outside the club, Danny Ramirez, 23, poses for a quick photo with El Compa, recognizing him from YouTube videos.

"Un moreno cantando corridos … I like that," he says, using the Spanish word for a dark-skinned or black person. "He's representing the Mexican community. Nobody would expect a black person singing corridos."

But Lowery's transformation into El Compa Negro says something about the power of cultural proximity — and Los Angeles' changing demographics.

Lowery was born in Compton in 1996, just a few years removed from the city's heyday as a birthplace of gangsta rap, the group N.W.A and its seminal album, "Straight Outta Compton."

But the teen was baptized into a city that was fast becoming less black and more Latino. In 1980, the black population stood at 73.9%, compared with 21.1% Latino, according to data from the Minnesota Population Center, National Historical Geographic Information System and the American Community Survey. In 1990, the gap began to close, with a black population of 52.7% and 43.7% Latino.

"When N.W.A puts Compton on the map, in terms of gangsta rap, they're in the throes of demographic change," said Albert Camarillo, a Stanford professor working on a book about Compton. "Even the communities those young black kids were a part of, they were beginning to change by that time."

Compton's changing demographics mirror a larger shift throughout the state, with Latinos now the largest ethnic group in California, according to U.S. Census Bureau figures released in June.

In the neighborhood where Lowery grew up, near Rosecrans and Santa Fe, most of his friends were Mexican American. Lowery said he quickly picked up the slang of Mexican Spanish. Although he says he isn't fluent, he can hold his own in conversations with friends — expertly rolling his r's and switching between Spanish and English.

When he doesn't recognize a Spanish word, he's quick to ask Lopez or a bandmate what it means, never wanting to sing a song he doesn't fully understand.

It's enough to confuse some fans, who insist that he must be from Mexico.

Every weekend, Lowery and his band, Los Mas Poderosos, visit restaurants, nightclubs and places that cater to Mexican immigrants and second-generation Mexican Americans, performing cumbias and corridos that many of the club-goers grew up hearing.

He's grown accustomed to the rituals of each place, watching with other men as women are trotted out to participate in sexy leg contests — dancing for money and enough applause to win the grand prize — and getting to dance with young Latinas when he isn't onstage.

Lowery has gotten his share of attention: He's been the subject of several stories, took third place in the Spanish-language program "Tengo Talento, Mucho Talento" — I Have Talent, Lots of Talent — and has been featured on Univision and Telemundo.

"He sings beautifully. Better than people back home," says Margarita Vaal, a Rialto resident who watched the teenager perform at a Mariscos restaurant where she and a friend split a bucket of Coronas.

Vaal, originally from Sinaloa, laments that he didn't take first place on the Spanish talent show.

"He has Mexican blood," she says.

When Lowery performs, he sounds almost fluent but is careful to stick to the songs on his set list, the ones he's memorized after years of practice. When the crowd requests songs, he switches to the drums, allowing Lopez to step in and take over, easily reading Spanish lyrics on YouTube.

"He needs to learn more Spanish," says Laura Arredondo, a Riverside resident who watched Lowery at the restaurant. "But he's OK."

Her mother, Maria Lopez, originally from Zacatecas, has kinder words for El Compa:

"It makes me happy to see someone from another race wrapped up in our Mexican culture."

Latinos' growing numbers have shaped arts, food, music and culture throughout the state. Swept up in the cultural river in his Compton neighborhood, by 13 Lowery had already developed an interest in reggaeton.

When he moved to Perris in Riverside County in 2009, he first heard the corridos that he now specializes in — earning him his nickname from a high school friend.

"I think increasingly Latinos are going to shape what you call the mainstream of American culture," says Eric Avila, a professor of history, Chicano studies and urban planning at UCLA. "You could look at Compa Negro as an example of that."

Although Lowery has blended two cultures, to the surprise of many who watch him perform, some have dismissed him as nothing more than a novelty act. Lopez has heard criticism from other performers who believe Lowery has no place in Mexican music and has had club owners who don't take the band seriously.

It's a criticism Lowery also heard from schoolmates growing up.

"They were like, 'Why would you go after something like that? You're not Mexican,'" Lowery says. "That's the whole reason why I'm doing it. I'm not Mexican, and I want to show the world that music is universal."

Although Lowery acknowledges the "wow" factor that comes with his ethnicity, he says he stays true to the musical genre he's selected. He rides horses, knows how to raise roosters, goes to jaripeos — Mexican rodeos — and can play the accordion.

When he becomes more famous, he says, his goal is to own a ranch with 20 horses.

For now, Lowery lives with his father in Moreno Valley — dreaming of one day getting a song on the radio and performing a sold-out show. And when times get tough, the music helps him through.

"Te metiste completamente en mi vida. No hay un momento que no este pensando en ti," he says, quoting Ariel Camacho's song "Te Metiste." "You're a part of my life completely. There isn't a moment I'm not thinking of you."

He's having problems with his girl now, he says, and Camacho's song is the best way to tell her how he feels.

After years singing in another language, it's Spanish that best conveys his heartbreak.