Keith Richards on his own again with new solo album, ‘Crosseyed Heart’ 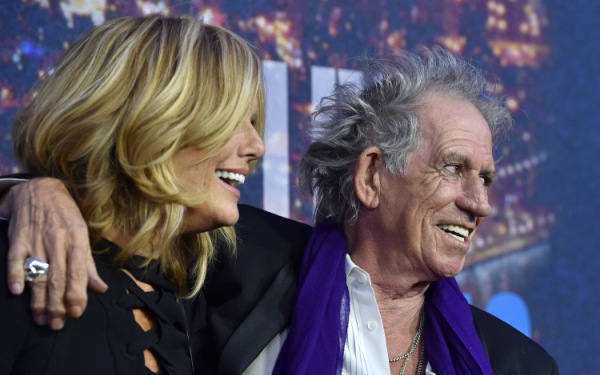 NEW YORK — Keith Richards had just picked up a pack of cigarettes from the coffee table in front of him, skillfully removed the cellophane and fired up the first of a string of smokes while talking about “Crosseyed Heart,” his first solo album in nearly 25 years and a rare venture away from his musical identity as guitarist, songwriter and periodic lead singer with the Rolling Stones.

Despite having been finished for some 18 months, the album will finally be released this month.

“I’ve been on this (Rolling Stones’ Zip Code) tour, and that’s Numero Uno — the Gig!” Richards, 71, said good-naturedly while sitting recently on a sofa in his manager’s office in SoHo.

But now that the Stones are between tours, Richards’ wait is coming to an end. The album is due Sept. 18, and he’s eyeing the possibility of solo shows this fall, maybe even a short tour now that the Stones’ next round of shows, in South America, has been pushed from October and November into January.

Richards started working on what would become “Crosseyed Heart” in 2011, about the time his autobiography, “Life,” was becoming an international bestseller.

“The book was the hardest thing I ever did in my life,” said Richards, shaking his head. “And you think the record world is bad? The book world is incredible — they’ve been at it longer.”

The process of retracing his life dovetailed neatly with writing new songs with his co-producer and main collaborator, drummer Steve Jordan. Richards began flexing the compositional muscles he hadn’t used much with the Stones since the band’s most recent album of new material, 2005’s “A Bigger Bang.”

“We actually didn’t start off to make an album, per se,” he said. “We said, ‘Let’s go in and cut a few tracks and see what happens.’

“After about three or four months — we could only do this once a week, sometimes once a month, really, there was no ‘project’ — we suddenly realized we had half an album. At that point,” Richards said through what often sounds like a bucket of gravel in his throat, “we said, ‘We might as well go in for the whole hog.’”

Richards’ raspy voice and signature hook-heavy guitar work are front and center on “Crosseyed Heart,” and he plays bass and keyboards on some of the tracks. He’s also tapped some of the same musicians who played on his previous solo outings backed by the band he dubbed the X-Pensive Winos: guitarist Waddy Wachtel, keyboardist Ivan Neville and singer Sarah Dash. Guests include Aaron Neville of New Orleans’ celebrated Neville Brothers, longtime Stones saxophonist Bobby Keys (who died in December) and singer Norah Jones, who duets with Richards on “Illusion.”

The latter is one of half a dozen ballads on the album, a shift in pacing that marks one of the major differences between a Richards solo effort and his work with the Stones.

“Mick is not a big one for ballads,” he said with a chuckle. “But I do love ballads. Always have. I didn’t write ‘Angie’ for nothing, or ‘Ruby Tuesday.’”

Richards’ honesty about his longtime bandmate and songwriting partner carries through to his assessment of his own strengths and weaknesses. About his vocal limitations, Richards said: “I’m always dodgy about my voice. It’s usually because I don’t sing a lot.

“I realize my range is fairly limited, but at the same time, so is Bob Dylan’s.”

He also includes a hauntingly spare version of blues singer and songwriter Leadbelly’s song “Goodnight Irene.” Richards, not surprisingly, has turned to the original lyrics, which paint a more harrowing picture than the song gets in the usual campfire sing-along renditions:

I love Irene, God knows I do

Love her till the seas run dry

If Irene ever turns me down

Richards, of course, has notoriously imbibed more than his share of substances — legal and illegal — over the course of his storied life with the Stones. Yet he’s still here, in great spirits, laughing easily, and often, during an interview to discuss how a couple of decades had slipped by without realizing he hadn’t made a record apart from the Stones since 1992’s “Main Offender.”

That was just his second solo effort, after “Talk Is Cheap” in 1988, which belatedly established his solo identity a quarter century after the Stones emerged during the British Invasion as the dark and dangerous counterpart to the Beatles.

Topics on “Crosseyed Heart” run the gamut from lustful romance (the title track) to forgiveness and renewal (“Heartstopper”) to near-comic real-life mishaps (“Amnesia”) and the importance of honesty in a relationship (“Illusion”).

“Amnesia” references a tumble Richards took in 2006 while he was in Fiji, where it was widely reported that he’d fallen out of a tree. “Knocked on my head/ Everything went blank/ I didn’t even know the Titanic sank/ How can I regret/ It’s so easy to forget … . I can’t recall the past, I’m nowhere.”

Asked if there are things about his life he regrets, at first he jokes, “I don’t know — I forgot them!”

Then he pauses, his voice dropping into a more somber tone. “I lost a son,” he said referring to his 2-month-old son, Tara Jo Jo Gunne, who died of sudden infant death syndrome in 1976. “But I don’t know if that comes in the realm of regret. It’s a sorrow.”

Richards’ unguardedness about virtually any subject also struck documentary filmmaker Morgan Neville, who has directed a companion Netflix film, “Keith Richards: Under the Influence,” that premieres the same day “Crosseyed Heart” is scheduled for release.

“What made the film so much fun,” Neville said from his office in L.A.’s Echo Park, “is that he’s in such a good place now. He doesn’t worry about anything. He’s such an honest person; it’s rare for a famous person to be that open and honest. That’s liberating.”

Neville took an Academy Award for his 2013 documentary “20 Feet From Stardom,” a homage to backup singers who often remain in the shadows of various rock stars — including the Stones.

With “Under the Influence,” Neville said his aim was “to make sure the documentary was timeless in its own way, that it wasn’t rooted in the album.”

Like the album, the film came together serendipitously. Neville said Richards’ manager, Jane Rose, had commissioned him to film an interview in lieu of asking the musician to undertake an extensive round of media sessions to promote the album.

But it’s not a major undertaking for Richards to swing by Rose’s office for selected interviews, since it’s just a few hours from Connecticut, where he lives with his wife of 31 years, former model Patti Hansen.

“As a music geek,” Neville said, “it was kind of the documentary I’ve been training for my whole life. If you started out trying to make a documentary like this, to do all the research you’d need to do to prepare for it, you couldn’t. You have to have spent 20 or 30 years as a music obsessive to play in the same game as Keith.”

Neville showed up for the first film session with a stack of vinyl records and started mining Richards’ passion for old blues, rock, R&B, country, folk and gospel music.

“We weren’t trying to tell Keith’s life story,” Neville said, because Richards had done that himself in his book. “Basically, we were just trying to emulate the experience of hanging out with Keith.”

Does that mean Neville can now check “hanging out with Keith” off his own bucket list?

“There’s the bucket list,” Neville said, “and there are other things too unimaginable to even make your bucket list. This is one of those.”