LGBT archive at USC preserves personal stories from a hidden past 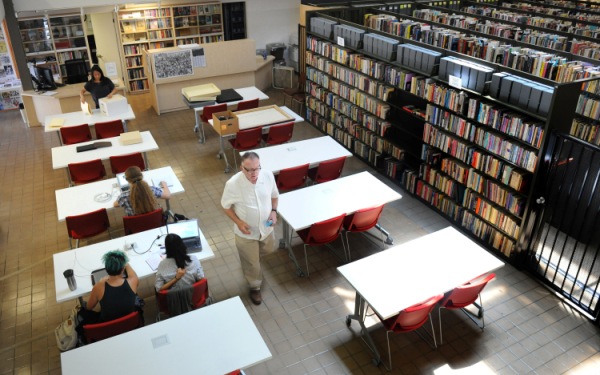 The ONE National Gay and Lesbian Archives at the USC Libraries in Los Angeles, believed to be the world's largest collection of LGBT artifacts.
(Credit: Wally Skalij/Los Angeles Times/TNS)

The paper is yellowed now, the penciled cursive fading, but the letters from the World War II Women’s Army Corps servicewoman to her sweetheart are romantic as ever.

“Good morning, darling. I’m so very used to going to sleep watching you smoke that cigarette (if I’m not in your arms) that I couldn’t sleep.”

It was 1944. The writer, a witty young “service gal” stationed in San Bernardino was in love — with another Army woman.

“It doesn’t startle me at all,” she wrote to her girlfriend, saying her mother would be shocked if she found out about them. “I know that I need you and want you with me and nothing about it seems remarkable or different. It’s just a fact.”

These were not activists or celebrities, just women in love at a time before being openly gay, let alone marriage equality, had achieved broad public acceptance. And that’s exactly why their candid, intimate correspondence is so important, say archivists at the ONE National Gay and Lesbian Archives at the USC Libraries, where their letters are now stored.

“They’re not always important people, but they’re important because they lived in a particular era and they wrote about it,” said Fred Bradford, a retiree and former member of the ONE board of directors. “For a long time the library systems around the world, if they had any books about homosexuality, it was in the abnormal psychology section.”

The ONE archive is believed to be the world’s largest collection of LGBT artifacts, including personal items from photo albums and letters to diaries.

While the LGBT rights movement has made tremendous strides in recent years, gay history is little known because it was kept out of the history books for so long, said Joseph Hawkins, director of the archive.

ONE archivists are working with the Los Angeles Unified School District and the Los Angeles LGBT Center to develop LGBT-inclusive history lessons that will be incorporated into the curriculum in the coming months to comply with the FAIR Education Act, a California law passed in 2011.

That law, the first of its kind in the nation, requires public schools to teach about the historic contributions of LGBT people. When it was passed, the Legislature suspended all adoptions of instructional material through eighth grade until 2015.

“So many young folks know a lot about marriage equality and about current struggles, but so few people know about what came before,” said Hawkins, a USC professor of anthropology and gender studies. “It is certainly not because they have been remiss, but because we were denied a history by the American educational system. From the conservative perspective, why teach anyone about the history of deviancy and perversion, which was how the right saw it.”

Saving the stories of the past, archivist say, is often a race against time as older gays and lesbians age. But getting them to tell their stories openly remains a challenge.

On a recent Saturday, Hawkins stood on the porch of the female World War II veteran who wrote the letters, clutching a voice recorder. It was early morning, hot already, and he had driven more than two hours from Los Angeles to her San Bernardino County home to listen to her stories about her partner of more than 50 years.

Now 95, she declined to be named after a lifetime of keeping her true relationship with her partner quiet. They got by, she said, with people just assuming they were “two spinsters with a cat.”

Over lunch, Hawkins gently prodded her for details, as he’s been doing for a few years now. Her partner died several years ago, and it was a difficult, monthslong decision to donate their private letters, she said. For years, they were stuffed in old boxes in the attic. At one point, desperate to keep them private, she burned many of the letters before a trip overseas.

Hawkins cringed. But it wasn’t the first time he had heard that.

After the death of Don Slater, a founding editor of ONE magazine — a 1950s “magazine for homosexuals” that fought obscenity laws and FBI surveillance and went to the U.S. Supreme Court for the right to distribute through the mail — his bereft partner, Tony Reyes, began hurling records, letters, documents from the magazine and archive’s early days, into the garbage. Hawkins dug them out.

Over the years, numerous personal items, such as gay-themed magazines, have been brought to the archive as quiet donations after people’s loved ones died, Hawkins said.

“People would come and whisper things like, ‘I found this under Aunt Harriet’s bed and thought you might want it,’” Hawkins said. “I’d tell them, ‘You don’t have to whisper.’ For others, it’s a legacy moment. They feel like if their stuff is here, they’ll live on forever. And some just want to get rid of all of it.”

There’s a catalog for an at-home electroshock therapy kit used to “reinforce sex preference” by shocking the wearer if he or she reacted positively to images of members of the same sex. There is the 1957 black-and-white photo of two suit-clad men, gazing into each other’s eyes, exchanging rings before an officiant. A photo store owner who thought it was inappropriate never returned it to the customer after it was developed.

Then there are hundreds of magazines, for many people the only direct connection they had to other people like them. RFD, a magazine for rural gay men, ran articles in the 1970s about how to build your own cabin and letters from readers who loved the country life but were terribly lonely.

One of the archives’ newest collections contains the personal writings and letters of Lisa Ben (a pseudonym for “lesbian”), who in 1947 created Vice Versa: America’s Gayest Magazine for lesbians. She secretly typed them up at the Hollywood movie studio where she worked, making a few copies at a time on carbon paper and mailing them out or handing them to friends at a local lesbian bar — until someone warned her she’d get in trouble if a vice squad showed up.

The new materials from Ben, a reclusive 93-year-old resident of an assisted living home, include trinkets: a leopard-print purse, a pin reading “Old Lesbian, West Coast Conference & Celebration 1987.” In dozens of personal photos, she smiles broadly.

The collections of “ordinary folks put flesh on the bones of history and make it come alive,” Hawkins said. “Our history was not just one oppressive dirge after another, but little tiny victories, hard fought and hard won, that equal a really rousing triumph for humanity.”