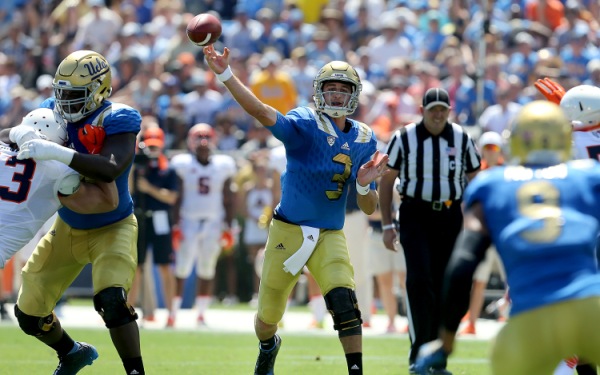 It’s only one game. He’s only 18. The sample size is small. The season is long. Afterward, his coach understandably attempted to slow the buzz by pushing his outstretched palms downward in a suppressing motion.

OK … not. Forget it. Not gonna work. No amount of rationalizing will pick all those jaws off the Rose Bowl floor. No chunks of common sense will stop the rubbing of eyes, the nudging of neighbors, the emptying of lungs that filled the Arroyo Seco with stunned surprise.

Nothing, it seems, can quiet the roaring hope that freshman quarterback Josh Rosen brought to UCLA football Saturday in his debut, a season-opening 34-16 victory over Virginia.

Sorry, coach, but the kid was unbelievable, OK?

Rated as one of the nation’s best high school quarterbacks, he exceeded even the wildest dreams of Bruins fans. Everyone figured he would be good. Few had any idea that this quickly he would be this good.

Rosen completed passes over defenders, around defenders, and occasionally just torched the ball through defenders. He threw while on the run, while falling on his back, and sometimes, splendidly, while just standing 6-feet-4 inches tall in the pocket.

While getting hammered in the stomach, he completed a screen pass that led to the first touchdown. With his team leading by a point, he threw an absolutely perfect 30-yard pass over the middle of the Virginia defense for the second touchdown. Finally, while being thrown to the ground, he found an open 310-pound nose guard on a screen pass for a third touchdown.

“Hit me right between the numbers,” chortled Kenny Clark.

He was precise. He was powerful. He was inspirational, slapping hands and backs and telling his teammates, “This game is slower than I thought.”

“I heard that and I’m like, ‘Oh-kay?’” said receiver Eldridge Massington.

In all, Rosen set the UCLA first-year freshman quarterback record with 28 completions in 35 attempts for 351 yards. He tied the record with three touchdown passes.

His debut was at least equal to the brilliant debut of his predecessor, Brett Hundley, and his aura reminded one of Cade McNown, who led UCLA to 20 consecutive victories in the late 1990s. Rosen might have unkempt blond hair and a scraggly kid mustache, but his swagger is solid.

Sorry, coach, but your own players and coaches couldn’t help themselves.

“Sometimes we’re looking at each other like, ‘OK, how did he do that?’” said Thomas Duarte, who caught that 30-yard touchdown pass in traffic.

Devin Fuller, who caught a four-yard frozen rope for Rosen’s first career touchdown pass, added, “A couple of those throws, they were some ‘Wow’ throws.”

Then there was offensive coordinator Noel Mazzone, who nodded when he was asked whether there was anything he learned about the kid who this time last year was attending Bellflower St. John Bosco High.

“Yeah,” Mazzone said. “Make sure he’s in the huddle when we play.”

Somewhat unbelievably — or maybe not — Mazzone ordered that Rosen’s first play of his career be a deep pass. And goodness, what a pass, the ball traveling 55 yards in the air, a perfect throw over the shoulder of a streaking receiver. Although Kenneth Walker III dropped it, the message had been sent.

“I figured I would get it out of the way, everybody in the stands will be happy for at least one series … and the beer sales would go up,” said Mazzone with a smile. “I said, ‘This is your first play in the Rose Bowl, I don’t think it ought to be handing off to somebody.’”

Rosen loved the call. Rosen loved it all. The Manhattan Beach son of a doctor and a former journalist was very practiced and deferential during his postgame interview, but at one point he literally glowed.

“It was surreal, it was really surreal,” he said. “I mean, you should try it, it’s definitely a good time.”

As Rosen’s teammates shouted his nickname to him during the interview, “Chosen Rosen,” he said he was “incredibly nervous” before the game, but that “once I get my hands on the ball, I settle down.”

That hands-on-the-ball thing must have happened during warmups. Before the game, according to receiver Jordan Payton, he was more than fine.

Rosen credited the team’s veteran offensive line and receivers for making his job easy, and, sometimes it really did look easy, like on third down, when he went six for eight for 116 yards.

“I am a true freshman, but our team most certainly is not,” Rosen said. “I really don’t have to do much to keep this incredibly powerful train on its tracks.”

In the end, that train was too powerful even for the giant brakes being worked by Jim Mora, who actually began his interview session by mentioning two other freshmen before finally getting to Rosen. When finally asked whether Rosen did anything that made him say, “Wow,” the coach relented.

“I thought the throw to Thomas Duarte was a little bit of an, ‘Ohhh, that’s good.’” Mora said.