Bullets and Octane: Set To Ignite a Frenzy 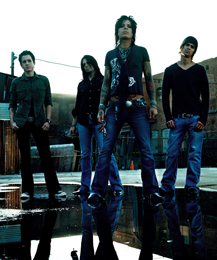 Even if your conscience warns heavily against it, it's impossible not to wonder if Gene Louis is indeed the wild animal/human hybrid he appears to be. There's absolutely no taming the Bullets and Octane frontman, whose slithering, snake-like movements, kick-in-your-face attitude and agro energy turns domesticated concertgoers into adrenaline junkies on a nightly basis.

He may perform with reckless abandon onstage, but offstage, Louis, the tattoo-covered, cigarette-smoking, whiskey-drinking singer has a quite human-like side to him, one that reeks of passion, overt enthusiasm and genuine heart for his music.

“It's a different thing onstage. Every band will notice that if they get the chance,” he begins. “You will learn that entertaining is entertaining and being yourself is being yourself. A lot of times you get caught up in one or the other, but being that guy on stage doesn't work in the real world.”

Having spent the greater part of last year recording In the Mouth of the Young, the band's debut for RCA Records and follow up to 2004's The Revelry, and sharing the stage with acts such as Avenged Sevenfold, Social Distortion and Flogging Molly, the members of Bullets and Octane are currently taking the U.S. by storm on their first headlining tour.

Seeing the way Louis dominates the stage, it comes as no surprise to learn that the St Louis, Mo. native was pretty much destined to be in the spotlight, but discovering that he got his start by playing in Dixieland jazz bands is an idea that some may find a bit harder to grasp.

“My dad is a big band drummer and I was named after a bunch of old drummers so it was kind of set in stone that I had to play music of some sort,” he explains. “Playing with my dad is the first recollection I have of being alive.”

After touring and playing with his father for most of his life, Louis eventually decided it was time to do his own thing, and in 1999, he and hometown friend and bassist Brent Clawson made the trek out to Orange County to start Bullets and Octane. It wasn't until the band's original vocalist quit that Louis decided to make the move center stage and recruit drummer Ty Smith (Guttermouth, the Vandals) and later guitarist James Daniel to join the band.

“I always think it's a thing where drummers want to sing. It's great to be a rhythmic person and be aggressive but at some point you want to be melodic and start being musical in a way of tones and melodies in ways you can't do with drums,” Louis says of the transition.

What has since culminated is a style of music that defies the norm and goes against the grain of today's scenester, sound-alike, look-alike bands with its unique, gritty rock inspired punk, that has an appealing balance between infectious hooks and fiery energy to keep your heart pumping.

Even so, Louis attributes much of the band's inspiration to the wide spectrum of music he was exposed to growing up.

“My dad would take me to the jazz thing and my brother was into cock rock back in those days, and my neighbors, since it was the Midwest, would listen to classic rock stations while washing their cars and drinking beer in their cut off jean shorts and mustaches. Being able to listen to all that stuff you get an ear for so many different things,” Louis says of the cross-pollination of styles.

With the recently released In the Mouth of the Young , the band's primary goal was to give listeners a full rounded record that would appeal to a diversity of tastes.

“You've got the faster songs, the slower ballad, the heavy song and the catchy one – to me that's what a good record is,” Louis says.

He and his band mates also found themselves reflecting what it really means to be in a rock 'n' roll band these days.

“The thing about rock 'n' roll is that it used to be such a scary thing. You know, sex, drugs and rock 'n' roll, but there's nothing dangerous to that anymore where you're like ‘God, that's scary',” he says. “So we were like, ‘what really is and what are the songs about, what are we trying to say.'”

What Louis believes to be dangerous these days, is the reality of life.

“No one stays married, everyone is fucked up and everyone's got some disease. Rock 'n' roll ain't nothing, it's reality that scares me.”

In the Mouth of the Young is currently available. For more information, visit www.bullets-and-octane.com .