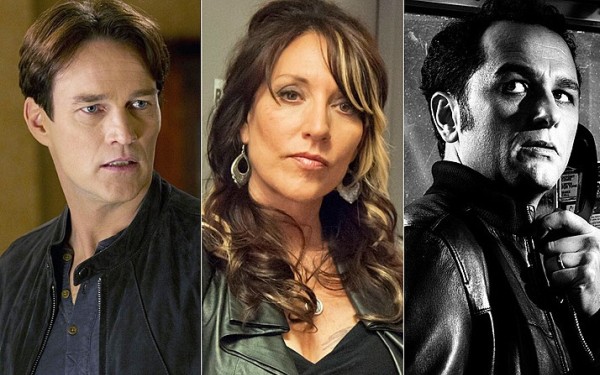 The 2015 fall season is shaping up to be something remarkable-- remarkable, because, in what we’ve been calling a TV golden age for the last few years, it is so stunningly undistinguished. Yes, there are watchable shows, but nowhere in the puny list of new series is there even a passing whiff of creative genius or bold imagination.

The importance of the fall season has all but evaporated over the years, simply because the old paradigm of a new show with 22 episodes launching in September doesn’t fit either the way people watch TV content, what they want from it or for how long.

There’s no question that the explosive growth of the TV medium has contributed greatly, for better or worse, to a shortened national attention span. Each new thing, whether it’s a movie, a new song by a pop megastar, or a TV show, is instantly consumed, and the public is clamoring for “what else ya got” a second later.

Fall was huge when broadcast dominated the medium. There may have been a smattering of mid-season shows, but for the networks, and their advertisers, it was all about what premiered in the fall. The summer? Nothing but reruns. Who ever heard of a show like “Mad Men” premiering in the summer?

This year’s fall season seems to suggest all but complete surrender on the part of broadcast, an acknowledgement that with a content buffet that now includes basic and premium cable, digital streaming and original web series, you may as well just crank out predictable fare and hope it hangs around long enough to make back its production costs. Meanwhile, if something’s been working for a few years, it’s golden. Hang on to it til the last viewer turns the light off and heads for bed.

In fact, three of the four major broadcast channels are banking mostly on returning shows to maintain viewers, rather than betting some momentarily bright new shiny thing might attract a new demographic. ABC has Shonda Rhimes’ killer Thursday lineup ready for another go-round, and its Wednesday night sitcom quartet, followed by the return of “Nashville” at 10 p.m.

Fox has “Empire,” “Sleepy Hollow,” its Sunday comedy and animation mix and “Bones.” CBS has “Survivor,” “Madame Secretary,” “The Good Wife,” the “NCIS” franchise, and “The Big Bang Theory”-- and, in fact, has no room yet for “Mike & Molly,” “Two Broke Girls” or “Person of Interest.”

All of these are solid shows, even if they aren’t all quite top-drawer. But they’re enough for each network to hold on to its viewer base.

The exception is NBC, scrambling desperately to find its place in the broadcast world with a raft of new shows, and only renewing solid hits like “The Blacklist,” “Saturday Night Live” and “Grimm.” It also renewed “The Mysteries of Laura,” with a sad hope it could eke out a second season. ABC, CBS and Fox will advance five new shows apiece this season. NBC will offer eight. Not a huge difference, but a telling one.

That isn’t to say this year’s entire crop is terrible. It isn’t. There are several very decent, very watchable shows. FX’s “The Bastard Executioner,” premiering Sept. 15, is an early winner. Created by Kurt Sutter (“Sons of Anarchy”), it’s about Welsh rebels battling evil British overlords in the 14th century and stars Stephen Moyer and the bewitchingly amazing chameleon, Katey Sagal.

NBC’s “Blindspot” shows the network doesn’t have a blind spot when it come to shows created by Greg Berlanti, known for his golden touch over at The CW with “The Flash” and “Arrow.” The NBC show is about a young woman who wakes up naked and covered with tattoos that turn out to be clues to forthcoming crimes. But who is she? She doesn’t know, but she seems to be skilled in the kinds of things government agents do well.

ABC’s “Quantico” is formulaic, but could have legs. Young FBI trainees competing and copulating in Virginia. And “Blood & Oil” fits the network’s continuing love of overheated melodrama with a night time soap opera about, well, blood and oil, but it’s not set in Dallas. Don Johnson co-stars.

CBS’ “Life in Pieces” is a multigenerational sitcom in which stories are told from various characters’ points of view. James Brolin and Dianne Wiest co-star in a show that could pull the kind of loyal audience NBC’s “Parenthood” drew for all those seasons.

Berlanti also has his fingerprints on a bit of an anomaly for CBS: The new series “Supergirl,” based on the comic book character and starring Melissa Benoist. CBS only goes after younger demo with great care and consideration. How this show would fit with “Mike & Molly” and “Broke Girls,” if they return to their traditional Monday slots, is a small question. CBS has also lured Jane Lynch into a new show, with a touch of the old “Touched by an Angel” concept: Lynch plays the guardian angel to Maggie Lawson in “Angel From Hell,” and the two become good friends.

Fox has a promising list of new shows, including “Minority Report,” produced by Steven Spielberg and based on the Philip K. Dick novel; a comedy-horror anthology series called “Scream Queens” from Ryan Murphy’s little shop of hilarious horrors; and two sitcoms with somewhat aging pretty boy actors, “Grandfathered” with John Stamos, and “The Grinder” with Rob Lowe. Both comedies should do well with ratings, even if neither is going to give “Modern Family” or “Louis” a run for its Emmys.

PBS is sticking predictably close to the tried, true and British with some new “Masterpiece” offerings as it looks forward, with dread, no doubt, to the final “Downton Abbey” season in 2016. “Indian Summers” has probably the best option of becoming a new “Downton” as Julie Walters plays a British woman in India toward the end of British rule of the subcontinent. “Home Fires” is so cozy it coos: Plucky British women in a small town at the dawn of World War II bond together for king and country. It will appeal to fans of “Call the Midwife.”

Enjoyable though some of these shows, and others, may be, there’s no suggestion that the next “Breaking Bad,” “Mad Men,” “The Wire” or “The Sopranos” is anywhere in sight. That would be even more depressing if the Fall season counted as much as it used to.

David Wiegand is the TV critic and an assistant managing editor of the San Francisco Chronicle. E-mail: dwiegand@sfchronicle.com Twitter: @WaitWhat_TV