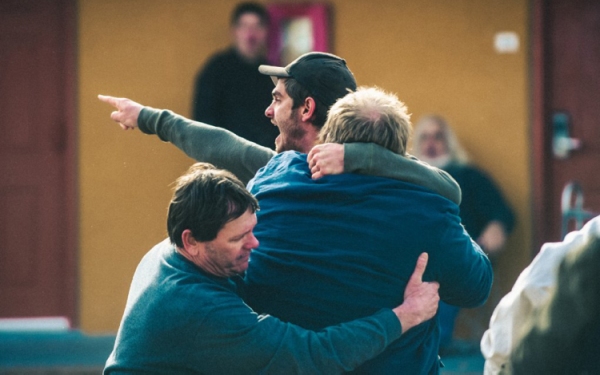 In a number of new movies grappling with tough social issues, filmmakers have struggled to achieve a balance between engaging audiences with real-world problems while striving to also still entertain.

The makers behind diverse films such as “99 Homes,” “Suffragette,” “Brooklyn” and “Time Out of Mind” are all well aware of not wanting audiences to feel they are being lectured at, spoken down to or given saccharine lessons. The foreclosure crisis, women’s rights, the immigrant experience and homelessness are the headline topics of these pictures, but they are all also deeply invested in the human dramas underneath.

The downside of pictures engaged with social issues is readily apparent, as when “Time Out of Mind” star Richard Gere recently said the filmmaking team was well aware of not wanting to make the “movie of the week version” of their story. “Suffragette” screenwriter Abi Morgan wanted to avoid the story turning into “an airport novel” while telling a story of women fighting injustice.

Filmmaker Ramin Bahrani, director and co-writer of “99 Homes,” opening Sept. 25, has experience in fusing drama and reality in previous films such as “At Any Price,” about Midwestern farmers, or “Man Push Cart,” about a New York street vendor. With “99 Homes,” Bahrani set his sights on the human cost of housing foreclosures in Florida; he went there to research the story before beginning to write the script.

“Why not talk to people or go places or see things where it’s really happening and then structure that into a story and add the fiction to it?” said Bahrani. “I like as an audience member going into worlds I have not seen. I feel life is so interesting, it inspires me.”

Near the beginning of the film, a young man and his mother (Andrew Garfield, Laura Dern) are evicted from their foreclosed house despite their efforts to keep the bank at bay. Desperate to earn money, the young man, Dennis, begins working for the scheming real estate agent (Michael Shannon, in a performance at once demonic and delicate) who had carried out the foreclosure. Dennis soon finds himself on the other side, profiting off the destroyed lives of others.

“That’s where, unbeknownst to myself, I was like, ‘Wow, this is going to be different from my other films,’” said Bahrani. “Initially, I thought it would be like my other films, a social film, a simple drama, but the things I was seeing, the scams, the violence, kind of ratcheted in a different direction, and the story went there.”

“Suffragette,” opening Oct. 23, explores the hard work and sacrifice that went into winning women the right to vote in Britain in the early part of the last century, with purposeful echoes of similar fights for women’s rights that continue today.

For screenwriter Morgan, whose other credits include “The Iron Lady,” the blending of historical fact with fiction was among the biggest challenges of creating the story, which mixes uplift with a procedural sense of the struggle to make social change happen.

“What was very interesting for us was to take some very key factual events and historical events, and find a way of colliding them with fictional events,” said Morgan. “The research is very much drawn from first-hand accounts of women who lived in that era, but Maud herself is a completely fictional character.

“But what I tried to do with all the characters is find a kind of authentic model. This ensemble of women was a prism to see the very eclectic group of Pankhurst’s followers.”

“Brooklyn,” opening Nov. 6, was adapted by Nick Hornby from the novel by Colm Toibin. Irish-born director John Crowley has worked in theater, film and television, including the recent second-season finale of “True Detective.” Set in the 1950s, the film tells the story of a young woman, Eilis Lacey (Saoirse Ronan), who leaves her small Irish town to come to America alone. Struggling to build a new life in a new land, she is unexpectedly called back home and finds herself torn between the life she knew and the life she has been building on her own. The cast includes Emory Cohen and Domhnall Gleeson as her chief suitors.

“For me, it’s all about exile, which has a very particular emotional state,” said Crowley. “It’s not just about immigration and emigration, it’s about what happens when you leave home and you’re no longer from the place that you’ve left but equally you’re not from the place you’ve chosen as your new home.”

In its own way, the film grapples with the current hot topic of immigration and the immigrant experience. Yet both because of the distance of its period setting and the deeply felt emotions of its classically styled storytelling and performances, the movie avoids ever feeling like a pamphlet polemic.

“What I wanted immediately when I read the book and then the screenplay was to get that emotional immediacy,” Crowley said. “It’s not just a period piece of ‘Gosh, this is the way things were in the ‘50s.’ It’s trying to get at a deeper emotional connection of anybody that leaves home properly, as it were. What it means to leave home and grow up.”

“Time Out of Mind,” which opens in Los Angeles on Sept. 11, is a bracing look at homelessness. Directed and written by Oren Moverman, the film stars Gere as a man living on the streets. Though bits and pieces of his story emerge from interactions with others, the movie is observational, following him through the obstacles of the day, obtaining a place to sleep or something to eat.

“I didn’t want to feel that there was dramaturgical necessity in the movie,” said Gere, also a producer on the project, “but something much quieter, much more subliminal. What I wanted to highlight in this was not in terms of language but just in terms of feeling, experiencing this guy with him, not watching him, but I wanted audiences to feel it. No separation.”

Much of the movie was shot on the streets of New York, with Gere at times really panhandling for hidden cameras. Perhaps speaking to people’s ability to look away from the homeless, Gere said in 21 days of shooting, he was recognized only twice.

Gere has become active with a number of homeless advocacy groups, and so while “Time Out of Mind” is first and foremost a movie meant to engage audiences emotionally, if it spurs anyone to action, all the better. “I think this is one of the few movies that I’ve made that really has a dual purpose,” he said.

It may be asking a little much to think that a movie can change the world, but perhaps what it can do is simply open a viewer’s mind to an experience outside his or her own, set the viewer on a path toward a broader understanding.

If it is sometimes said that Hollywood doesn’t much care for reality, these stories connect with audiences and in turn connect them just a little more to the outside world. The intersection of genuine social issues and fictionalized drama can take audiences somewhere different and new.

“My hope is it’s a good balance,” Bahrani said. “I think it’s not possible to take one away from the other. If it was not a social film, I think it would not be that interesting. I don’t think that would happen if it was just one or the other.”

Special Features
Digital theater is all the rage, but could it destroy the live stage?
570 views

Special Features
Oscars 2020: Who will win and who should win
929 views

Special Features
Secret screenings. Redacted scripts. How they make the twists in ‘This Is Us’
389 views