Nathaniel Rateliff makes the album of his R&B/soul dreams 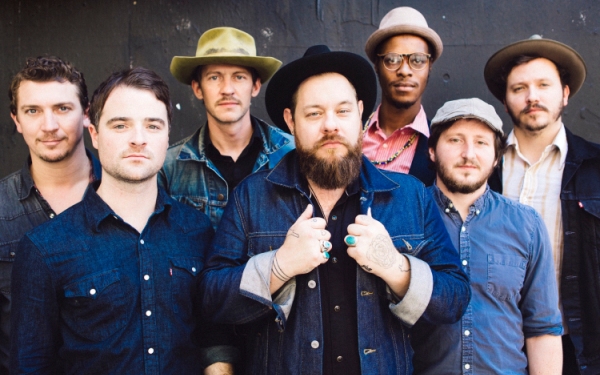 Singer-songwriter Nathaniel Rateliff grew up listening to the joyous sounds of Sam & Dave, Otis Redding, Wilson Pickett and other artists on Memphis’ Stax Records. Now the label, renown for popularizing Southern soul, is home to Rateliff and his new release, “Nathaniel Rateliff & the Night Sweats.”

But for much of his career, the Missouri-born, Denver-based artist played introspective, folk-rooted music — far from the invigorating, ‘60s-rooted soul and R&B at the heart of his new project.

“I’d been doing the singer-songwriter thing for about seven years,” Rateliff, 36, told The Times from his home in Denver during a break between road trips. “When we made our last record, it looked like it wasn’t going to come out — everything took so long. Out of that discouragement, I was like, I don’t know if I want to keep doing this.

“This has taken a lot of sacrifices by myself, my friends, our families and all our relationships,” said Rateliff, who, with his stocky build and bushy beard, mustache and plentiful tattoos, looks more like a character out of “Duck Dynasty” than an R&B disciple. “So when you’re discouraged, you start thinking, ‘I guess I could be a gardener again, or a carpenter, refinish furniture.’ I was asking myself, ‘What could I do to make me happy?’ I’d always wanted to do an R&B and soul record; a friend with a studio asked to come by and record a couple of songs, maybe just make a 45. Then the songs started to pour out, and pretty soon we had eight or 10 songs down.”

The band’s breakout single, the gospel-drenched rave-up “S.O.B.,” landed them a spot on the “Tonight Show” last month, and host Jimmy Fallon was such a fan he kept playing snippets from the album until the band’s performance (Rateliff was also happy to bust a few James Brown-inspired, oil-on-glass dance moves).

“That’s the way to do it — standing ovation, baby!” Fallon shouted after the performance.

The album made an impressive debut when it was released late last month, landing at No. 17 on the Billboard 200 Albums chart.

Now Rateliff and company will play Thursday at the Regent Theater in downtown L.A. The gig was originally scheduled for the 350-seat Echo club, then moved to the bigger 700-capacity Echoplex, and moved again to the 1,100-seat Regent in response to the artist’s growing popularity. Similar venue upgrades have been made for their shows in Chicago, Iowa, Boston, Philadelphia, Washington, Nashville, New Orleans and Austin, Texas.

“These shows are really fun to play, compared to playing sad, sad songs all night,” said Rateliff. “But I feel really comfortable in both realms. One of the guys I’ve been playing with for 21 years did an interview recently, and I heard him say ‘This is the first time I’ve heard (Rateliff) sound like it was him.’ It was really nice hearing that from someone I’ve been playing with for so long.’”

The ebullient sound and spirit that characterizes “Nathaniel Rateliff & the Night Sweats” is a dramatic departure from the intimate tone of his 2013 album, “Falling Faster Than You,” and its 2010 predecessor, “In Memory of Loss.” Still, as Rateliff notes, many of the themes are the same.

Troubled relationships and coming to terms with personal demons — the latter playing out in “S.O.B.,” in which he sings about the painful task of wrestling with sobriety.

Rateliff said he’d immersed himself in the music Van Morrison was making in the mid-1960s for Bang Records — the sessions that yielded his first solo hit, “Brown-Eyed Girl” — and those fed his vision for his own take on soul music.

“I’ve always loved soul, R&B, doo-wop and blues, and I’ve wanted to make a record like that for years,” he said, then paused.