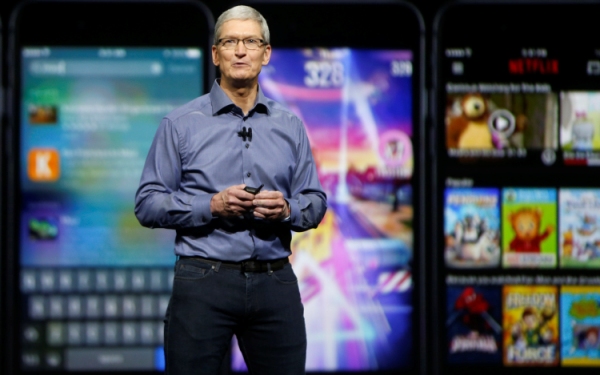 SAN FRANCISCO — Apple’s new $99 Pencil will bring out the inner Van Gogh in every iPad user. Its newly empowered Apple Watch can monitor a baby’s heartbeat and send it to the doctor. And Siri is moving into the living room.

In a two-hour extravaganza, Apple on Wednesday unveiled a veritable bounty of new and at times mind-boggling products, including two new iPhones and a new larger iPad Pro, that should keep every fanboy busy for months.

And grabbing top billing amid a chorus line of shimmering new designs and powerful technologies was the souped-up and Siri-controlled Apple TV, which CEO Tim Cook unveiled with a rousing setup reminiscent of the stagecraft of the guy whose job he took, Apple co-founder Steve Jobs.

“TV plays a huge role in our lives and an important place in our homes, but the TV experience hasn’t changed that much in decades,” Cook said, slowly warming up the crowd of 7,000 analysts, journalists, employees and guests. “It’s been virtually standing still while innovation has been thriving in the mobile space. Today, we are going to do something about that.”

And here’s what they suggested: “Our vision for TV is simple and perhaps a little provocative,” Cook said. “We believe the future of TV is apps.”

New apps to watch HBO and Showtime. Apps to instantly see the best play in that Giants game. Apps to shop for clothes from that fashion-show dressing room on your TV screen. And apps to book an Airbnb room or buy a house on Zillow.

The real star of the show might have been Siri, whose trainers have somehow made her much smarter, much more intuitive, and then unleashed her in the parlor where, according to Apple, she’ll change forever the way we experience television.

The event, a staple of September as Apple announces the latest iterations of its family of high-tech goodies, featured a non-stop conga line of innovations by Apple employees, many of them on hand for the event. There’s the new larger iPad Pro, which Cook called “the clearest expression of our vision of the future of personal computing.” There’s the two new iPhone models, the 6s and 6sPlus, both featuring new 3D Touch that allows user to push the screen harder or softer to pull up different layers of information and detail. And there’s the new Apple Watch models, gussied up with striking new bands and cases and now carrying more than 10,000 apps designed specifically for the wrist-bound device.

Yet it was the new Apple TV, introduced by Eddy Cue, Apple’s head of Internet Software and Services, that stole the show. After years of hinting about the promising future of Apple TV, Apple has finally begun to deliver the goods. The new and improved remote control is worth the price of admission alone, with a new user interface that turns the remote into a magic wand that can scan through movies, pull up background data and control video games. And rounding it out is the new and improved Siri, which brilliantly can call up obscure TV shows and helps the user pick out movies to watch — “What are some new comedies that would be good to watch with the kids?” — or find that one Seinfeld episode that Ed Norton did a cameo in.

“The new user interface brings the same touch-screen experience of the iPhone to your television,” said Cue.

While Apple traditionally unveils its new products at smaller venues, Wednesday’s event took place at the Bill Graham Civic Auditorium, a larger concert hall that can hold 7,000 people. Built in 1915 as part of the Panama-Pacific International Exposition, the auditorium’s selection as the site for Apple’s latest announcement had the rumor mill running even hotter than it normally does.

In the week leading up to the show, Apple started gussying up the building, with signs bearing the Apple logo and Apple-branded flags flying. One wall of the auditorium features a logo with rainbow-colored accents and a blue background.

Hints before the event that a newly improved Siri might make an appearance created even more buzz, as the email invitation Apple sent to reporters featured a colorful Apple logo and this tease: “Hey Siri, give us a hint.” For days, journalists and fanboys had a ball testing that out, getting smart-elec answers back from Apple’s virtual assistant, including this zinger on Tuesday afternoon:

“Sure thing. It’s going to be … hey wait, you’re not disclosed. Sorry. You’ll have to wait until tomorrow like everyone else.”

While Apple tried to build more and more buzz, much of the news had already either been leaked or was so obvious that it wasn’t really a surprise. That included widespread expectations of a new iPhone 6S and iPhone 6 Plus S, the introduction to the iPhone of Force Touch technology which can differentiate between various types of finger pressure, and as well as a souped-up Apple TV.

As analyst Toni Sacconaghi, Jr., wrote in a note to investors on the eve of the event, “Apple is also expected to announce a new and improved Apple TV with more computing power, and an ability to run developer-written apps, which could signal an intent to use Apple TV as a gaming console (vs. its current use for media streaming and display mirroring).”

Josiah Humphrey, co-founder and co-CEO of Appster, a San Francisco-based app developer company, said the developer crowd was especially excited by the news about 3D Touch technology and “we’re excited to see how Apple will incorporate the technology into the new iPhone 6s and 6s Plus.

“The display technology may pose a pretty big challenge for developers, as they’ll have to find creative ways to incorporate the technology into their apps without disrupting controls, menus and other triggers,” Humphrey added. “Developers will have to listen closely to user feedback as the Force Touch rolls out, and act accordingly. If done correctly, one touch could replace three, and triple the productivity rate within applications.”“

“iOS 9 is going to bring some of the biggest changes we’ve seen, and enhance multitasking on mobile like never before,” said Humphrey. “For consumers, there will be a slight learning curve that’s easy for iPhone and iPad users to adapt to. But for developers, there are big concerns in regards to energy efficiencies and memory space on the new devices, likely causing developers to have to pick and choose which features to incorporate in order to save space and battery.”