L7 reunion tour: ‘In our absence, our fans totally kept us alive’ 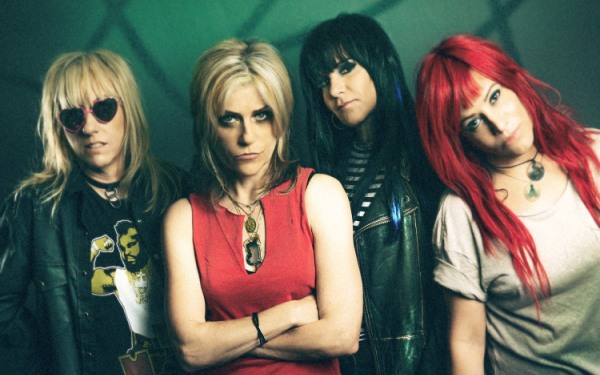 The L.A. punk-metal band’s run lasted from 1985 to 2001, influencing the riot grrrl bands of the early 1990s without reaching the same heights as their grunge (and often male) contemporaries.

Around 2013, when L7 singer and guitarist Donita Sparks started to post videos and pictures on L7’s official Facebook page in an effort to digitize her archives, she wasn’t thinking about a reunion. But then the page started to blow up with activity. Sparks then met Sarah Price, a documentary filmmaker, at a dinner party, and Price suggested they make a film about the band. A Kickstarter campaign yielded $130,000, $30,000 more than expected.

Clearly, there was demand for L7 to return, so after 15 years of estrangement from her former bandmates, Sparks called them up. “‘It’s now or never,’ I told them,” Sparks said, speaking by phone from her hotel room in New York. “‘This won’t happen in five years.’”

Now, L7 is playing to sold-out crowds in bigger spaces than they played the first time around. They are bringing out not only folks who were fans of 1992’s “Bricks Are Heavy,” or 1997’s major-label debut “The Beauty Process: Triple Platinum,” but also younger people barely alive when the first go-round went round.

Since they disbanded, L7 has been featured on video game sound tracks like “Rock Band 2” and “Grand Theft Auto: San Andreas.” But social-media platforms like YouTube, which Sparks called “the best library for pop culture for the 20th century,” also helped bring L7 to a completely different audience.

“In our absence, our fans totally kept us alive,” Sparks said. “The media had really buried us. We weren’t mentioned in bands-of-the-‘90s or women-in-rock stories. But our fans were archiving us in the digital world. I was seeing interviews I had never seen before.”

Certainly, things have changed for Sparks and her bandmates, singer-guitarist Suzi Gardner, singer-bassist Jennifer Finch, and drummer Dee Plakas. They’re older now. They can stay in separate hotel rooms. They know they need alone time and don’t have to spend every second all cramped in a van on the road together. Their set lists tend to rely heavily on old faithfuls, “Andres,” “Pretend We’re Dead,” and “Slide,” a song Sparks wrote with Gardner about old boyfriends that still cracks her up.

It’s that humor that Sparks said stuck with fans over the years. “We keep it light. You can get angsty, but it’s all in good fun. We were never the band that wanted to incite a riot,” she said. “A lot of rock has been feel-good for a long time, but a little bit of healthy aggression is good, too. We just have a little tongue-in-cheek to it. We’re fun and feisty.”

Sparks is intent on keeping it light. She’s frequently asked about new L7 material, but she says the band hasn’t really talked about it yet. They just wanted to make those fans on Facebook happy for a couple of hours.

“Fans really wanted this [tour] to happen, more so than I did,” Sparks said. “We weren’t pining for this. We didn’t need to relive what we already lived. It’s just gravy for us. We’re not pushing an album, we’re just having fun. Let’s just rock out.”