Film is not dead - not according to Quentin Tarantino 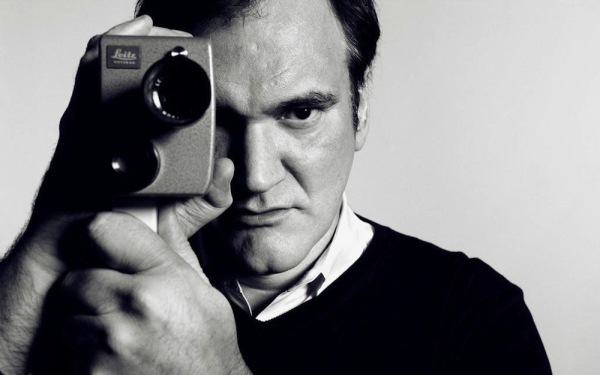 Avery: “Well then it won’t be film anymore.”

— From “The Flick,” by Annie Baker

Is it really over?

We’ve heard so many stories. They tell of the dying and even the dirt-on-the-coffin death of film as a storytelling medium, and as a way to project movies onto our psyches.

Film, the story goes, was killed by the advent, the alleged economy and undeniable ubiquity of digital cameras and digital projection equipment. Film lost. And it’s true: The vast majority of movies screened on Earth, today, tonight, are projected digitally.

They are “ingested” components of a digital cinema package, commonly known by the unglamorous acronym DCP.

But if film is dead, why has writer-director Quentin Tarantino chosen to shoot his latest, “The Hateful Eight,” on film stock? And not just any film stock: Ultra Panavision 70 millimeter film stock, using some of same camera lenses “Ben-Hur” used back in 1959.

If it’s dead, how did Tarantino convince his longtime backer, Harvey Weinstein of The Weinstein Company, to strike somewhere between 100 and 300 ultra-rare 70mm prints of the Christmas release, along with a few 35mm prints (rare enough these days) and the now-customary digital editions?

At the San Diego Comic-Con this summer, Tarantino likened digital projection as “HBO in public.” No magic. No magic river of light, gushing from the darkened confines of a projection booth. No projector clatter and whir. Tarantino’s last film “Django Unchained” made $425 million worldwide. His artistic preferences mean something at the box office, at least when he’s lucky.

Weinstein told the Wall Street Journal last year: “I don’t think we could look some of our filmmakers in the eyes if we didn’t do it.”

Here’s what “it” was. Last summer, the Wall Street Journal revealed negotiations between the beleaguered Eastman Kodak Company, its business clobbered by the digital shift in professional and amateur moviemaking, and the six major Hollywood studios.

If Kodak was to continue making film stock, Kodak needed assurances from the studios that they’d buy 450 million linear feet of it. That would be enough to keep the Rochester, N.Y. factory in business for several more years.

Tarantino applied some pressure to make it happen. So did Christopher Nolan, who made “The Dark Knight” and “Inception” and “Interstellar.” He is the most ardent and eloquent champion of film stock and the visual glories of 35mm and 70mm projection. Early this year, in February, Kodak announced an agreement.

“It was absolutely key to film’s survival,” Nolan told me. “It’s hard to imagine a future without it.” Nolan and Tarantino were joined by others, including Judd Apatow (“Trainwreck”) and Martin Scorsese, the medium’s bespectacled, caffeinated Yoda, in supporting the cause. The reasons for the devotion to film stock are many, some of them nostalgic, some of them tactile. But film’s adherents are following in the grand old industry tradition of judging something, or someone, by their looks. And films shot digitally do not yet look as good as films shot on film.

Many filmmakers use both, Scorsese chief among them; shoot on film for some projects and digitally for others. But as Nolan says, “I want every filmmaker to be able to choose. Preserving both technologies is critically important.”

He tries to be diplomatic, but Nolan believes that “when you photograph something digitally, there’s a certain edge-sharpening quality that seems exaggerated. It’s not the way the eyes see things. People aren’t actually seeing more detail; they’re seeing an exaggeration of that detail.” Anyone who suffered through Peter Jackson’s scuzzy, high-frame-rate editions of “The Hobbit” knows what Nolan means.

The key to the Kodak deal, says Kodak CEO Jeff Clarke, was simple: “The artists. The artists needed to work with the studios to talk about their love of film.” He notes: “Our factory costs over $100 million a year to run. It’s a fixed-cost operation. And we needed to go to our customers, the studios, and determine if there was enough demand to keep that factory going.”

In the 1971 film “The Last Picture Show,” set 20 years earlier, a tiny Texas town’s only theater is about to call it a day, leaving its screenings of “Wagon Train” and “Red River” behind forever. “Sorry you’re closin’ the show,” the manager’s told by a steady customer. The rise of television spells trouble for the single-screen loners dotting a changing horizon.

Last year’s Pulitzer Prize-winning play “The Flick,” by Annie Baker, is very much its own, wonderful achievement, but it echoes many of the themes of “The Last Picture Show.” Currently playing off-Broadway, the play receives its Chicago premiere early next year at Steppenwolf Theatre Company.

Set in 2012, it’s about three young employees of a fast-fading single-screen repertory house in North Brookfield, Mass. The digital conversion is imminent. One employee, the true cinephile of the group, writes a letter to the new owner, arguing to keep the theater, called The Flick, as a film-only operation. It’s an economically foolish argument, but he is passionate, and reads aloud from his letter.

“Film can express things that computers never will,” he says. “Film is a series of photographs separated by split seconds of darkness. Film is light and shadow and it is the light and shadow that were there on the day you shot the film.” In “The Flick,” when the projectionist teaches one of her colleagues how to work the equipment and get the image on screen, it’s as if a secret note were being passed, fraught with romantic possibility.

I spent some time in a projection booth the other night. The Northwest Chicago Film Society is run by Becca Hall, Julian Antos and Kyle Westphal, film projectionists and programmers who worked at the Bank of America Cinema in Chicago’s Portage Park neighborhood, and then moved their operation to the Portage Theater, and then the Patio, and then became itinerant for a while.

The non-profit film society does not muck around with digital anything. They show 16mm and 35mm prints of films, all kinds, they love.

An hour before showtime, Antos checked the speakers and the projection equipment. “Right now,” he said, in the booth, “I’m running my favorite film. It’s a test film called ‘RP40,’ designed to set focus and framing.” It’s on a short, continuous loop, and while the projectionist adjusts for sharpness and placement, the floop-floop-floop of the loop becomes strangely hypnotic. “It’s the film I’ve projected the most and watched the most. And every year we nominate it for the National Film Registry.” It’s a piece of 20th century film history, and here it is, still alive in the 21st.

One hundred and fifty people showed up for “Housekeeping,” many of them film society devotees from years past, some brand new to the experience. Local filmmaker Stephen Cone (“The Wise Kids,” “Henry Gamble’s Birthday Party”) delivers some choice introductory remarks, calling Forsyth’s film “a death-haunted comedy.” Westphal touts the fall season, which begins Sept. 2 with a 35mm IB Technicolor print of Alfred Hitchcock’s crimson-splashed “Marnie.”

Prior to the “Housekeeping” screening, while Antos finished his prep, Westphal sat in the auditorium and talked about film.

“When people come here,” he says, “they’re not just seeing an old film; they’re seeing a part of history, and we try to give people a context for what they’re seeing.” With so many digital movie-streaming options available, Westphal says, some movie lovers have lost their interest in film proper.

“Don’t get me wrong,” he says. “I think it’s great we have technologies disseminating these films to a broader audience. And we’re privileged here; we have the ability to show these films on 35. But if you’re talking about a digital restoration shown on DCP, you’re talking about money. If it’s DCP, it means it was made sometime in the last seven years. And it was made available that way because someone thought it was worth the 50, 100, 200 thousand dollars to scan it, to make the DCP and make it available. The studio, or the archive, or the rights-holder, anointed the film in question.”

On DCP, how much of what critic Manny Farber once called the “termite art,” as opposed to the official, bigger-budgeted “white elephant art,” will ever be available to future generations?

The survival of film as a medium, many say, is as important as the survival of oils in the age of acrylics. The richness of film, in the right filmmakers’ hands, lends a wealth of shadow detail in the darker tones and a quality of color that digital hasn’t yet matched. “There are certain colors,” Nolan says, “that are impossible to reproduce digitally — blues, and magic-hour (dusk and sunset) shots, these are very, very difficult to translate to digital effectively.”

Nolan notes that the average filmgoer isn’t aware that films such as “Jurassic World” or “Mission: Impossible — Rogue Nation” were shot on film and then projected digitally. “You simply get a higher-resolution image that way,” Nolan explains, “and then a better image when you downgrade. The quality of the originating medium is important.” Others believe it, too, among them Steven Spielberg (“Bridge of Spies”), Sam Mendes (“Spectre”) and J.J. Abrams (“Star Wars: Episode VII — The Force Awakens”). Those are potentially three very big movies, and all three were shot largely or entirely on film.

This Christmas, in 50 or so markets, Tarantino’s “The Hateful Eight” will cross a bridge many thought they’d never see again. His post-Civil War Western, shot in 70mm, will be screened in select theaters on 70mm equipment. Will enough people care to make a difference at the box office?

Various Chicago exhibitors have contacted the Weinstein Company to express their interest and ability to show it in 70mm. Kerasotes Theatres, based in Chicago, has thrown its hat in the ring, according to chief operating officer Tim Johnson. “If they give it to us,” he says, we’ll commit to one of our bigger ICON Theatre auditoriums for four weeks.”

Chicago’s Music Box Theatre is interested as well. The grand old 1929 Music Box runs digital and film projection regularly in both auditoriums on Southport. “It’s one of the ways we distinguish ourselves from other theaters,” says programming director Brian Andreotti. He notes that their annual “Noir City” festival, continuing through Sept. 3, wouldn’t be possible without proper 35mm projection capabilites. This October, the Music Box presents a traveling program of 35mm shorts by the Brothers Quay, masterly animators working on a very high level, curated by Christopher Nolan.

No one can say with certainty that films preserved only on DCP will be preserved at all in 50 years’ time. With proper care, film stock can survive indefinitely. It has proven its staying power. But it needs all the champions it can find.

A few minutes before “Housekeeping,” Westphal of the Northwest Chicago Film Society put it to me this way: “When you’re looking at a film print, you’re looking at something that was mass-produced. But it went through the lab, it was approved by the filmmaker, presumably, by the studio, certainly, and they had an answer print made that said in effect: ‘This is what we want this film to look like.’”

Chris Johnson runs the Chicago movie theater chain Classic Cinemas, and acknowledges the elephant in the room. “The economics of showing movies on film are a challenge,” he says. The regional chain retains a single 35mm projector and showed Nolan’s “Interstellar” at the Tivoli in 35. The problem with film, says Johnson, who started as a Tivoli usher in 1980, is that “you get a little wear and tear, you get a little scratch, you get a little shake after a while. And we did have people say to us, ‘Hey! When you gonna show this in digital?’ And yet with film you get that warm, rich, throwback quality. It’s the same feeling people get when they buy albums now.”

He laughs. “I got rid of all my albums too early. Damn.”