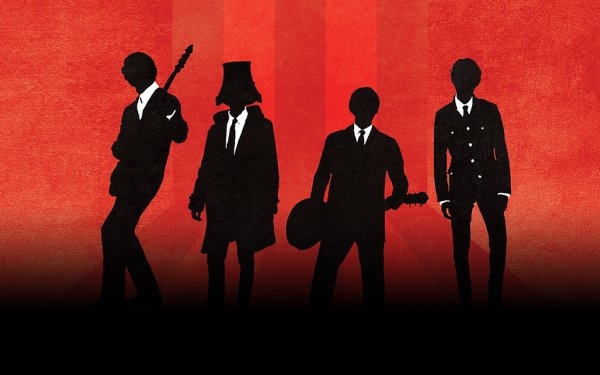 Playwright Rolin Jones flew up to Oakland to meet with Billie Joe Armstrong about collaborating on a project together and as Jones was laying out the idea for a new play with music, fans kept interrupting, asking the Green Day frontman for an autograph. All the while, during the pitch, Jones says the rocker was mostly listening in silence.

Yep, that was about it, acknowledged the playwright, who grew up in Woodland Hills and was nominated for a Pulitzer Prize for his play “The Intelligent Design of Jenny Chow.”

The result of the meeting: “These Paper Bullets!”

The Jones-Armstrong collaboration is having its West Coast premiere at the Geffen Playhouse on Sept. 16 and is already in previews.

The “play-sical,” as Jones calls it, mashes up some of characters and plot from William Shakespeare’s comedy “Much Ado About Nothing” into the swinging British rock scene of the mid-1960s.

There, a Beatle-esque band from Liverpool called The Quartos reign. The group has even recently replaced its drummer — a la Ringo taking over for Pete Best — but in the play the former rhythm man is something of the villain out for revenge.

“These Paper Bullets!” was something of an accident. A couple of years back, there was an opening in the Yale Repertory Theatre schedule and the company asked director Jackson Gay to fill it with a Shakespeare comedy, which she wasn’t all that familiar with. At the time, the director was readying Jones’s roller-derby play “Jammer” at the Atlantic Theater Company in New York City.

Gay and Jones spent a couple of nights drinking and tossing around concepts after rehearsals, when the idea of the four returning soldiers in “Much Ado” and the frenzy of the four Beatles at the beginning of their heyday emerged.

That’s when they told Yale what they wanted to do and found they had nine months to put together a quasi-musical.

“We literally — one by one — started solving the problems for this play,” says Jones.

A major part of the puzzle was where do you get Beatle-style songs?

A short while later, a song popped up on Jones’ computer, a tune Armstrong create in his own studio, doing all the vocals, drums, bass, rhythm and lead guitars himself.

Jones says Armstrong’s songs wouldn’t sound out of place on the soundtracks of “A Hard Day’s Night” or “Help,” but stresses that they also stand on their own.

There were six tunes in the original Yale production, but Armstrong has added three more for the Geffen production, which will later move to the Atlantic Theater in Monterey Park during the holiday season. The two companies, along with Yale and Jones’ own theatrical group, are co-producing “These Paper Bullets!”

The past meets the present

One reason why “Mucho Ado” is one of The Great Bard’s most popular works is that it includes Shakespeare’s most romantic couple, observes Jones. (At least, a couple that survives.) “It’s charming in that way,” says the playwright of Beatrice and Benedick, the confirmed spinster and bachelor who are odds throughout the play but melt for each other by the end.

In “Paper Bullets” the characters are named Ben and Bea. Justin Kirk, who worked with Jones on “Weeds,” plays Ben in the Geffen production and describes his character as the John Lennon of the Quartos. Bea (Nicole Parker) is based on Mary Quant, the fame fashion designer during the Mod era. Like in the original, the characters have a history.

Though a longtime theater veteran, this will be the first time Kirk has been in a musical or a production of “Much Ado.”

But the character did require the actor to dig back to his younger years.

“I played guitar when I was younger and was in a band, but I put the guitar way about 15 years ago,” he reveals. “Then this came along, so I had to get back into it — and let me tell you, those muscles atrophy.”

Kirk calls the rest of the guys in the band the real thing and very supportive of each other.

“It’s been fun becoming sort of a real band. We’ve even performed a few things outside the show,” he says.

Jones recently signed a contract with Fox television and is working on developing some new shows for them as well as working on the upcoming CBS comedy “Life in Pieces.” So after working at his day job, he slips over to the Geffen to work on “Paper Bullets.”

He thinks that “it’s kinda cool” to have the first big production of one of his plays in his hometown, and notes that his high school of El Camino Real is even holding a fundraiser around the show.

“I’m a lucky jerk from Woodland Hills,” Jones says, with a laugh.