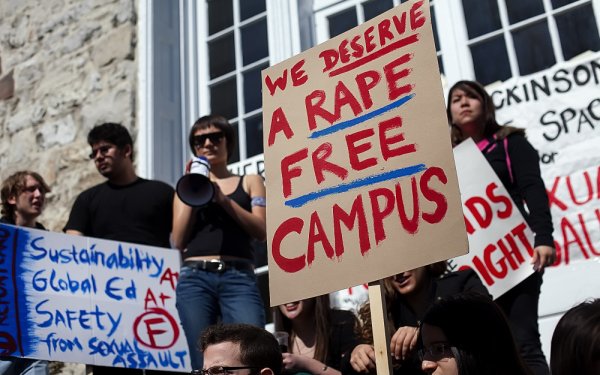 This fall, college students across the nation are getting the same homework assignment about sex, drinking and safety.

Campus Sexual Violence Elimination (SaVE) Act regulations, which took effect in July, require colleges and universities to give sexual violence and harassment prevention education to all new students and employees.

A nationwide rush to meet the mandate has created a fast-growing market of private companies selling online Campus SaVE Act courses, all promising to ensure compliance with the law. But some students say the courses are an invasion of privacy — and one that may not make much of a difference on campus.

College-geared sex education is “clearly something schools should be doing,” said Neena Chaudhry, senior counsel at the National Women’s Law Center. “There’s no way to address this issue without first training everybody.”

The Campus SaVE Act updates the 1990 Clery Act, which requires federally funded colleges and universities to disclose information about on-campus crime. It is part of a nationwide push to prevent sexual assault at colleges and universities, including a White House campaign and the increasing use of affirmative consent or “Yes Means Yes” policies at schools including the University of Minnesota.

The U.S. Department of Education has laid out guidelines for what educational programs should include, but colleges and universities have been left to their own devices when it comes to implementation. A lot of schools ramped up sexual assault prevention efforts a few years ago, amid recommendations from the White House and the Office for Civil Rights.

“The buzz nationally was that institutions needed to do a better job of training our students — and primarily our new, incoming students,” said Jerry Knighton, Title IX coordinator at South Carolina’s Clemson University.

Many schools offer sexual assault prevention training throughout the academic year, but are turning to online courses as a way to reach a lot of students in a short period of time.

The online course is “a way of ensuring compliance that we could document that students received our policies and procedures, that they acknowledged receipt,” Knighton said. “And that basically allowed us to be minimally compliant.”

For companies, the new federal guidelines are a beckoning business opportunity.

Waqar Ali runs a company called Get Inclusive, which develops and sells Campus SaVE Act courses. He founded the company in July 2013 and said the business, which focuses on diversity training for workplaces and schools, has grown threefold since then.

“When we saw that this law was going to be passed … it was a no-brainer for us,” he said.

A U.S. Department of Education spokesman said in a statement that the department advises institutions to be cautious when buying these courses, and to tailor them as needed to meet federal requirements. Where the course comes from doesn’t affect whether a school is compliant or not, he said.

Clemson made national news last year when students complained about an online course called “Think About It,” saying some of the questions it asked about sexual activity and alcohol consumption were too personal. The university suspended the course temporarily and is offering a modified version this year.

St. Olaf College in Northfield started requiring incoming students to take “Think About It” two years ago. The course covers “the interconnected issues of hooking up, substance abuse, sexual violence and stress through a variety of interactive, realistic scenarios and guided self-reflection,” according to the college.

This year, all St. Olaf students have to complete the course — and can’t register for classes until they do. Asa Giannini, a senior, has contacted school officials with privacy concerns and questions about the course’s effectiveness.

“The sense that I have is primarily through interaction with students,” she said. “I can tell you that our students are much more informed.”

Two years ago, the University of Minnesota bought an online course called “Haven” that all incoming students are required to take. It covers sexual assault, bystander intervention and alcohol use. The U offers additional training to freshmen when they arrive and to the whole student body throughout the year.

Patrick English, a U senior and sexual assault prevention coordinator for the Interfraternity Council, said he thinks face-to-face discussions about sexual assault have the biggest effect on students. And he said it’s important, with all education initiatives, to start early.