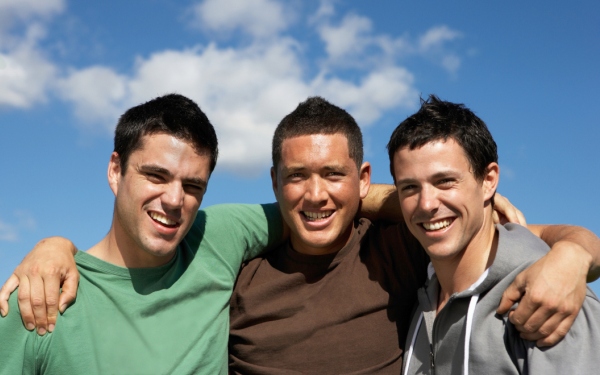 While they may not post BFF tributes to each other on social media or trade sentimental friendship tokens, emoticons or cards, today’s men have just as many friends as women, and they’re not just back-slapping beer buddies.

The same holds true for gays, lesbians and bisexuals, says a Sonoma State University researcher whose study has been called the most comprehensive look at friendship across genders and sexual orientation. Assistant sociology professor Brian Gillespie and his research team tackled the topic recently and found that each group regards platonic relationships as important to their happiness and satisfaction with life.

And in the age when “friends” can be friends of friends on Facebook, people you haven’t seen in 20 years and people you’ve never met and likely never will, quality still trumps quantity.

“You can have 3,000 Facebook friends,” Gillespie said, “but it’s your close friends that really count.”

The findings debunk old assumptions and the results of a classic 1983 study that documented definite differences between the sexes. “There were very different gender and marital dynamics back then,” he said.

Now 33, Gillespie was an infant when Claude Fischer and Stacey Oliker conducted their research at UC Berkeley.

Their study was much smaller and more homogeneous, drawing on 1,085 adults from Northern California who were primarily white. It excluded young single parents and older unmarried people.

“They were drawing on data from the 1970s. There were very different gender and marital dynamics back then,” said Gillespie.

“Husbands in mid-life then had many more friends than their wives because they had work friends. And their wives didn’t have work friends because many of them they didn’t work. We wanted to look at how that had changed over time.”

Fischer and Oliker also used a broader definition of friendship. To them, someone was a friend who you would ask to pick up your mail while you were on vacation.

“That wouldn’t fit into our conceptualization of friendships. We were looking specifically at close friends,” Gillespie said.

Gillespie, in his second year at Sonoma State, teamed up with three other researchers to take a wide-ranging look at friendship, including straight men and women as well as gays, lesbians and bisexuals.

They crafted their survey to define as close friends, those who you would call late at night if were in trouble or who would celebrate your birthday with you.

The team took the unorthodox approach — at least for academic research — of doing their surveys online, posting on popular sites like MSN and Elle with a wide diversity of content, from hard news and pop culture to sports and financial information.

They were overwhelmed with responses. More than 25,000 people as young as 18 and as old as 85 responded, including men, women, gays, lesbians and bisexuals living in all 50 states.

“Because we have this amazing huge dataset, we were able to beam in much finer grained categories,” he added.

His research team included David Frederick of Chapman University in Orange, Christian Grov at Brooklyn College in New York, and Lexie Harari, a graduate student who was Gillespie’s research assistant at California State University Channel Islands, where he taught before he arrived at Sonoma State.

Gillespie said sociological research typically hopes to find significant differences, but he found similarities, something he thinks points to a greater equality between the genders, as well as a growing social acceptance of gays, lesbians and bisexuals.

The survey did come up with some unexpected findings — women talk more about their sex lives with their girlfriends, a la “Sex in the City,” than men do with each other.

And younger gay men have more female friends with whom they can talk about their sex life than young heterosexual men do.

The similarities they found hold true for both casual friendships and close confidantes who are there for you in an emergency.

For instance, women and men reported having fairly equal numbers of casual and close friendships.

Traditionally, women’s friendships were thought of as “face to face,” like having coffee together, and men’s friendships were assumed to be “side by side,” like going to a football game together. Instead, Gillespie found men are freer to express an emotional component to their friendships with other men, without fearing that it would compomise their masculinity in a way that it might have in the past when gender roles were more strictly definied and enforced.

Heterosexual men, the research shows, also can have an emotional friendship with another man without it casting doubts on his heterosexuality or his masculinity, as is it did the past when gender roles were more strictly defined and socially enforced.

One of the main takeaways, he said, is that gender barriers are breaking down and there is a more “egalitarian” attitude about friendships amng the genders.

Gillespie acknowledged that using an online survey rather than a representative sample goes against the conventions of academic research and has its limitations because it includes only people who are frequent online users and people who would be independently drawn to an online survey.

As a result, older seniors who are not big Internet users are not included.

“The problem with any Internet research is that those respondents may not necessarily reflect the United States,” he said, “but it is a national sample. We have people from urban areas, the smallest of rural areas, from all 50 states.”

Gillespie grew up in Philadelphia and headed west to seek his academic fortune after hearing that California state universities offered free tuition.

To his chagrin, he found that wasn’t true, but he went on to earn a master’s degree in sociology from CSU Los Angeles and, at UC Irvine, an M.A. in Demographic and Social Analysis and a doctorate in Sociology.

His earlier research was focused on aging and the ways moving long distances impacts “social capital,” or friends, laying the groundwork for a whole new world of research.

You can reach Staff Writer Meg McConahey at meg.mcconahey@pressdemocrat.com or 521-5204.